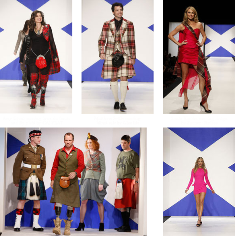 Hot Scots and bold-faced names from Glasgow, Edinburgh, New York City, Los Angeles, London and around the globe will again take over Manhattan for the start of Tartan Week in early April. The team that brought you 9 years of successful Dressed to Kilt events is pleased to announce that their 10th Anniversary Show is confirmed for Monday night, April 2, 2012 in New York City at the Liberty Theatre on West 42nd Street in the heart of Times Square and Broadway. This show will once again kick-off Tartan Week in the United States. From its humble origins 10 years ago, no one would have imagined that it would today be the highest profile Scottish fashion event in the world.

In speaking with the designers, models, sponsors, business partners, producers, manufacturers and hosting committee ambassadors who contribute to this show every year, they all wanted to do something different and special to mark the tenth anniversary . Ten years is time to rethink, refresh and reinvigorate one’s approach, therefore the 10th Anniversary Show will be called “From Scotland With Love” (www.FromScotlandWithLove.net). The new name highlights the special anniversary and it reflects the new partnerships, collaborations, beneficiaries and theme. We will still have the incredible line-up of celebrities and high profile individuals, but it will be an entirely new and different show with higher levels of couture, more live entertainment and many surprises. The organizers assure us that when you leave this year’s show you will again feel proud to be Scottish, and if you are not Scottish, you will wish that you were!

The Honorary Chairmen and Hosts of this year’s show will include Sir Tom Hunter, the founder of the Hunter Foundation; Lord McConnell, the current head of the Cash for Kids charity and the longest serving First Minister in Scotland’s history; Ian Grabiner, COO of the Arcadia Group; Brian Cox CBE, Scottish actor and Rector of the University of Dundee; Kevin McKidd, Scottish actor; Kiefer Sutherland, Canadian actor; Geoff Day, Senior Executive with Mercedes Benz USA; Dawn Halfaker, President of the Board of Directors of the Wounded Warrior Project and Captain, US Army (ret.) and many other distinguished and accomplished individuals from both sides of the Atlantic.

Lord McConnell, Chairman of Clyde 1 and Cash for Kids, commented:“This incredible event shines a light on the Scottish fashion industry, but there is also a strong philanthropic side to it. This event raises funds for causes that are close to the hearts of the people of Scotland and I am delighted that this year Cash for Kids will benefit. The fun in New York will deliver happiness for vulnerable children in Scotland. Because all of the running costs are met by the Hunter Foundation, every single penny that is donated to the Cash for kids goes straight back to help change children’s lives for the better. I look forward to being part of this world class event and helping more Scots kids as a result”.

Dr. Geoffrey Scott Carroll, the NYC-based Founder and Chairman of the previous Dressed to Kilt events and now also of “From Scotland With Love” stated: “we are delighted to be working with Lord McConnell again on our charitable event. While First Minister, he attended a number of our events in both New York City and Los Angeles where he actively supported the Scottish textiles, fashion, and design industries”. Dr. Carroll continued, “we are anticipating that this year’s show will be the best ever. It will be a combination of the best of the past decade plus a number of new and bold initiatives which have been the trademark of the show”. Peter Morris, the co-host and Los Angeles-based Vice Chairmen of the Dressed to Kilt events stated; “ the goal of our efforts and our event has always been, and will remain, to promote Scotland as a country, its culture, its talent, creativity and innovation and the age old Scottish values of education, exploration and enlightenment. In these difficult economic times for so many people, we want to refocus our efforts so that the next generation of Scots get the opportunity to make their contributions to those areas and further Scotland’s reputation as the best little country in the world”.

Robin Galbraith, Founder and Chairman of the Calzeat Group of Companies, a member of “The Scottish Textiles Group” and also an Honorary Chairman of “From Scotland With Love” stated; “ There is no question that this annual event is a major asset for our industry which raises our profile in the USA and throughout the world. It is a unique global shop window for Scottish textiles proving once again that in addition to tradition and quality, we also have style. It is a great honour to be involved in this 10th anniversary year”.

This highly anticipated event will be held at the Liberty Theatre on West 42nd Street in the heart of the Times Square/Broadway area. Constructed in 1904, this beautiful Beaux-Art building was home to some of the world’s greatest shows and stars, including: George M. Cohan, Fred and Adele Astaire, Cole Porter, George Gershwin, Jeanette MacDonald and Bill “Bojangles” Robinson. The latest renovation was completed at the end of 2011 and the venue now features dramatic cathedral ceilings, the original theatre boxes and moldings and sweeping balconies. It is now New York’s newest and most spectacular event space.

WHERE THE FUNDS GO

The Wounded Warrior Project will again be our primary beneficiary in the United States. This charity helps the thousands of wounded warriors returning home from the current conflicts in Iraq and Afghanistan and it also provides much needed assistance to their families. This year we will again be inviting several wounded warriors to join our celebrities on the runway. Though we are not a political organization, we believe that we owe the young men and women risking their lives to protect us a huge debt of gratitude. In the UK we will now be working directly with the incredible Cash for Kids charity. Cash for Kids makes a significant difference to thousands of sick and underprivileged children in Scottish communities an provides the neediest with a better and brighter future.