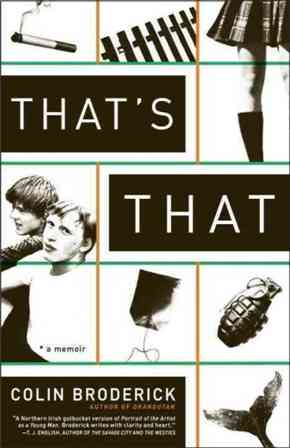 That’s That, the latest book from Irish author Colin Broderick is receiving good reviews, although it is not a story the author wished to tell. That’s That deals with the difficult subjects of Broderick’s early years in County Tyrone, Northern Ireland, as well as The Troubles, the violence that wracked Northern Ireland between the late 1960s and the late 1990s. The author, who now lives in New York, tells Celtic Life International about his book and what it cost him to write it.

“I actually didn’t want to write it at all in the beginning, but my agent Jane Dystel felt it was time for me to write about my childhood. I had already written my first memoir; Orangutan, which is a pretty hardcore account of the first twenty years I spent in the U.S., as I worked the Irish construction scene in New York and battled with one addiction after another through all sorts of madness, failed marriages, trips to hospitals and jail cells, while trying to somehow formulate my life as a writer. I wasn’t well for a long time and, once I’d made the admission that I wasn’t well, Jane felt that maybe it was time to get at the “why”. I think she understood that if I were to get past my own insanity I had to go back and make an effort to understand where I came from, and as a result discover who I really am.

“Writing the book was a nightmare. My third marriage fell apart about two years into writing, and I had at least one pretty severe breakdown. I was basically going back into my psyche to confront the dragons I’d spent my life running from. I wound up spending over four years immersed in the book trying to wade through to the other side. I had to acknowledge the pain and confusion of my own childhood and I had to try to be careful that in the telling of my own story I didn’t inflict too much unnecessary pain on my immediate family, especially my parents. Thirdly, I was writing about Northern Ireland, the Irish Republican Army, local atrocities, bone-deep hatreds, repression, the church, so I needed to be careful that I treated that material with the utmost care.

“I felt a real responsibility to get this right. I was trying to explain not just my own personal narrative, but what life was like for any regular family living through the years of The Troubles. I felt an obligation to tell a version of the story that would clarify, for the average American reader, what exactly The Troubles were all about. And I was educating myself and dealing with my own emotional resistance to the subject matter. I learned so much and I discovered myself. Still, this wasn’t so much a book for me as an experience. When I walked into Barnes and Noble and saw the actual book sitting there on the shelf for the first time I felt no emotional connection to it. For me, the experience was going through it.

“The book has had an incredible response. I’ve had men and women from all over Northern Ireland who grew up in that era say the same thing, ‘You wrote my childhood.’ That is the most amazing validation. And many Americans who’ve read the book have told me that they could never understand Northern Ireland, or the history that led to that period we call The Troubles, but the book clarified it for them. That’s been amazing because we have such an enormous section of the population here in America with a blood link to Ireland.”

Decades of divisions in Ulster left scars upon generations, with shattered psyches scattered across the region and around the world. An emotional coming-of-age account of growing up amidst that dysfunction, That’s That takes readers to the heart of the Troubles; both those inherent to the six counties of Northern Ireland and those within the author himself. An ‘insider’s perspective’, Broderick successfully captures and conveys small snippets of everyday life in County Tyrone, painting a pained portrait of a people in peril. By turns political, personal, tender and tough, That’s That is a powerful, profound and poignant detailing of one man’s descent into the past in an attempt to confront his demons and heal the present.