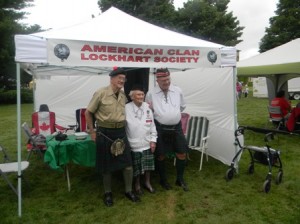 The American Clan Lockhart Society have enjoyed a busy summer, visiting Highland Games across the U.S and Canada. Recently we caught up with President Richard Lockhart.

How long have you been involved in the Clan and in what capacity?
Personally, we have been active in our Clan society since 2010.

What inspired you to get involved, and stay involved?
We enjoy the camaraderie and the friendships that have developed.  Our activity has helped to re-unite our parents’ nuclear family, so we enjoy the relationships we had as siblings and cousins when our Lockhart grandparents were alive and we all lived in Philly.

What is the Clan’s origins and history?
Our Chief, Angus of the Lee, 27th hereditary chief of the Lockharts, traces his ancestry to William Loccard in 1272.  As a clan, we trace our origins back to Symon Locard, the 2nd of Lee, who won fame for himself and his family fighting alongside Robert the Bruce in the struggle for Scottish Independence. He was knighted for his loyal service. Sir Symon was among the knights, led by Sir James Douglas, who took Bruces heart on crusade in 1329 to atone for his murder of John Comyn in the church of Grefriars in 1306. The crusade was ended prematurely when Douglas was killed fighting the Moors in Spain, but to commemorate the adventure and the honour done to the family, their name was changed from Locard to Lockheart, which afterwards became Lockhart. The heart within the fetterlock was from then on included in the arms of the family, and the dead is also commemorated in the motto, Corda Serrata Pando, “I Open Locked Hearts.”

How has it evolved over the years?
All members of the Lockhart clan are directly related to (or adopted by) someone whose name sounds like “Lockhart.”  There are no septs or branches as such, no sub-families, no other official offshoots associated with ours; so regardless what one’s appearance may indicate, we are all Lockharts.  None has lost a prehensile tail, an opposed big toe nor an inherited arm which drags on the ground.  Furthermore, Lockharts since the 1300s have been active pursuants of Scottish independence and sovereignty, from Sir Symon to George Lockhart, the only Scottish MP to have opposed the union of 1707 and another George Lockhart who supported the Jacobite cause as aide-de-camp to Bonnie Prince Charlie in 1745.  Although we are a Lowland family and technically not a clan, and we have had an officially recognized tartan only since 1996, and although our distant ancestors were probably of Norman origin in the first place, we are Scots. Saor Alba gu Brath!

How many members are actively involved?
In the American Clan Lockhart Society?  Out of about 150 family names on the roster, there are perhaps 60 listed as “active,” and there appear to be about 30 individuals who actively participate in ACLS events.

Where are Clan members from and how do they find you?
The ACLS membership is primarily from the USA, with a loyal contingent of Canadian members, as well, which we are hoping will grow and thrive.  Most members live in the northeastern quarter of the USA, north of NC and east of the Mississippi River, including the adjacent Canadian provinces to the north.  Our Society has a handbook which is updated as needed and which contains contact information for members; clan officers and event coordinators are highlighted for the membership.  There is also an ACLS website as well as a clan Lockhart website hosted by our chief in Scotland.

What kinds of Clan-related events do members participate in?
ACLS is active in Highland Games events primarily, and we hold our general meetings annually at one of those venues for the sake of convenience.  We have a newsletter which is issued quarterly, through which we exercise most of our general communications.  A roster of officers is always included in the letter.

What does the Clan have planned for the rest of 2013 and in the years to come?
The ACLS had plans to host clan hospitality tents at 14 events in the USA and Canada this year.  We’ve had two cancellations; but then again, we’ve picked up two spares so far.  Who knows what will happen: the best laid plans often fizzle; but we persist and we’ll hopefully grow in numbers and in family identity.  That’s our goal: family and friendship.  By the way, you’ll notice that we don’t have a “war cry” like many others.  I’ve chosen “Saor Alba gu Brath” as our testimony of sentiment: “Free Scotland Forever!”