The Battle of Bryn Glas 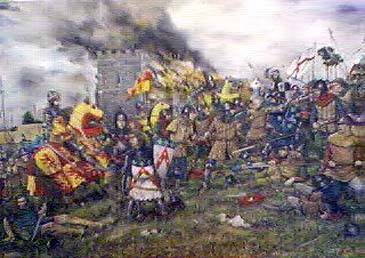 On this day 1402 the “Battle of Bryn Glas”, which was part of the Glyndwr Rising, occurred at Pilleth near Knighton.

A Welsh army vastly outnumbered and poorly armed, but under the leadership of Owain Glyndwr, took on and defeated a far superior English army. The victory was Wales’s greatest against the English and resulted the collapse of English governance in Wales. For the English it was a national humiliation on such a scale that within days, news had reached Rome and it led to the destabilisation of English politics for several years afterwards.

By 1401 The Welsh Rebellion was on the verge of collapse Henry IV had toured north Wales, hanging suspected rebels and pillag-ing settlements and the two-tier society where Englishmen held privileges above Welshmen was re-emerging.

But in early 1402, Glyndwr galvanised his support and the rebellion was reinvigorated, he had taken Ruthin and held Lord Grey, Henry’s trusted counselor for ransom, when in riposte, Henry raised an army of 2,000 men from Herefordshire and appointed Edmund Mortimer, as commander and On June 22, 1402 when Glyndwr was near Knighton the two armies confronted each other. Although heavily outnumbered, Glyndwr gambled on dividing his army, knowing that the majority of his army including his archers held the higher ground, he hid a small detachment in a valley to the left. As Mortimers army advanced up the slope, they came into range of the Welsh archers before they could return fire, they were showered by Welsh arrows. At this time two crucial events turned the battle, firstly the concealed Welsh troops joined in the conflict and then some Welsh archers, who had infiltrated Mortimers force, turned and fired into the English ranks.

The English army was routed and 600 of them killed. It is said that after the battle, Welsh women camp followers dismembered many the English victims in reprisal for their acts of brutality and rape in the preceding campaigns. Sir Edmund Mortimer was taken prisoner and as Henry IV made no effort to pay a ransom for him, he switched his allegiance to Glyndwr and married Owain’s daughter Caitrin.