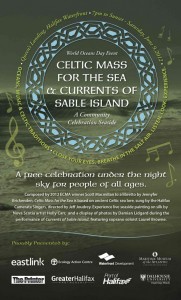 In June of 1988, Nova Scotia composer Scott Macmillan was commissioned by CBC to create a ‘Celtic Mass for the Sea’.  This Saturday night on Queen’s Landing in Halifax, the renowned musician will perform the acclaimed work, along with his ‘Currents of Sable Island’, as part of a free outdoor multi-media evening of song, live art, photography and ocean sciences in celebration and awareness of World Ocean s Day. In this exclusive interview with Celtic Life International, MacMillan comes clean about his career and the composition.

What is your own ethnic heritage/background?
I’m 3/4 Scottish, 1/4 Irish. Both the Macmillans and the MacLeods, my mother’s name, come from Prince Edward Island. On the Macmillan side my grandfather’s family came from Barra and my grandmother, named Carroll, came from Ireland. On my mother’s side, the MacLeod’s, and Nicholson’s, came from the Isle of Skye.

When and why did you begin composing and performing music?
I started playing the guitar at aged 11 and very gradually started coming up with my own music. I was quite excited when I found my very first “original” tune, a simple little melody, but I hadn’t heard it before. There’s been many more since then.

Are they the same reasons you do it today?
Basically, yes. Today I composed a 12 tone canon, which is compositional form that I write on a regular basis. I want to keep my composing “chops” well greased and composing counterpoint works great. Simply put, when I come up with a new creation I feel good. It’s like the melodies or ideas are already out there somewhere and I’m putting in the energy to “find” them.

What makes a good piece of music or song?
A hard question to answer; for me music must keep my interest, be it on a heart-felt level or of a more technical, cerebral context. Stylistically it doesn’t matter to me, but I love passion in music and I like to be challenged as a listener. I believe composers and performers need to put themselves in the “shoes” of the listener. To quote a hero of mine, Frank Zappa, he says: “It’s all just Entertainment”.

What inspired you to compose Celtic Mass For The Sea?
The Celtic Mass was a CBC commission which came out of a previous ensemble that I was writing for called the “Octet”. That group combined a string quartet with four “Celtic” instruments. My partner, Jennyfer Brickenden, took on the task of adapting the text and matching the words with traditional Gaelic melodies. She had unearthed a beautiful set of words made up of incantations and prayers both reflecting the ocean and the prayers found in the traditional liturgical Mass.

How did you get involved with World Oceans Day?
In June of 2011, Jennyfer and I were invited by the International Ocean’s Institute in Halifax to take part in what they called “Arts and the Sea” and talk about the Celtic Mass for the Sea. Usually their events are more of a scientific nature but on this occasion it was different. It was a very fulfilling experience and out of that came a desire to present the Mass in concert this year on World Ocean’s Day. Along with the Mass we have included my composition, “Currents of Sable Island”.

Is this something you will be involved with again in the future?
I certainly hope so.

What’s next on your creative agenda?
My mind tends to spin in several directions. I take great joy in combining old traditions and finding new ways to express those traditions. To that end there are many possibilities. I do like to have my music in such a form that others can play it. At this point I don’t have any specific projects looming, however I’d like to work towards releasing the recording of my 12 piece jazz ensemble “Scott ‘n the Rocks”. This particular group is great creative outlet for me, I can write whatever I want.

Is enough being done to preserve and promote Celtic culture?
My feeling is that there need more done to preserve and promote culture in general, and of course that includes Celtic culture. Over and over again I have seen and felt the benefit to everyone by having our government make investments into the cultural expression in our country, and my hope is that when decisions are made as to how our tax dollars are used that our cultural expression is taken seriously. In the scope of things, these “small” investments give us a “huge” return.

What can we be doing better?
It’s always important to be open and have new traditions rise up out of the old.  Traditions are morphing all the time, Celtic included.