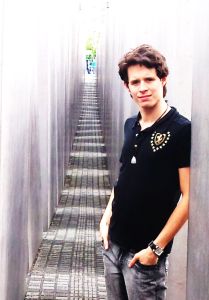 Growing up in Budapest in Hungary, Gyula Glaser never expected to make a career in Irish dance, but a mesmerizing show by Michael Flatley set the young man on a path that has already included winning multiple awards, performing in New York and fostering Irish dance in his new hometown, Berlin.

The life-changing moment that began Glaser’s career as an Irish dancer occurred ten years ago, when he was just 16.

“Like many others at the time, one of Michael Flatley’s productions got my attention on television,” he recalls. “I was fascinated by the footwork of those dancers and I wanted to try it myself.”

He began lessons with Budapest-based teacher Ronan Morgan, a former dancer in high-profile shows such as Lord of the Dance and Dancing on Dangerous Ground. Morgan had opened his school in 2000 and it was making waves, being the first Irish-run school in Hungary.

“Ronan was not just able to teach me how to dance, but also how to prepare for the challenges and the highs and lows of show business,” says Glaser.

One year after his first dance class with Ronan, Glaser attended his first Feis in Munich. “There was no stopping me after that,” he says with a grin.

Since then, his career highlights have included working with innovative Irish dancer and choreographer Breandan de Gallai who handpicked Glaser to perform in his groundbreaking show, Noctú, in which he blends traditional Irish dance with other dance styles.

Dancing with de Gallai’s Noctú for five weeks in the off-Broadway Irish Repertory Theater in New York was a huge experience for the young dancer.

“Though the dance language that Breandan created is strongly based on traditional Irish dance, our upper bodies became just as important as our feet,” explains Glaser. “We had eight shows a week, but it was also so easy in a way because we all loved every minute of it. The show was received very well and, later in 2012, it was nominated for the prestigious Drama Desk Awards for Unique Theatrical Experience and Outstanding Choreography.”

In 2010, Glaser enjoyed another formative experience when he danced with Magic of the Dance at the Cinema for Peace Gala in Berlin. Leonardo DiCaprio and Liam Neeson were among the star-studded audience and Glaser met Neeson afterwards. “We were all very excited,” he recalls. “I love dancing and I am very happy about the fact that I made my hobby into my profession. I think it’s important that people do what they love.”

Doing what he loves includes hosting Irish dance workshops in Berlin and performing with the Irish Beats Dance Company. It is good to work in a city and country where Irish dancing is popular and becoming more so.

“In 2010, we started Camp Rince Berlin, a week-long Irish dance camp that helps dancers improve their technique, repertoire, and just get together to enjoy Irish dancing. Since then, it has grown into an international event, with dancers coming from the USA, Ukraine, Russia, Poland and the Netherlands to take part; the number of participants is growing every year.”

Next year, a new program organized by the German Netzwerk Irland called 500 Days of Irish Life in Germany, will showcase 500 Irish cultural events taking place all over the country, including readings, lectures and performances. “These projects are playing a key role in making sure that Irish culture gets closer to people,” Glaser says.

As a dancer, he continues to evolve and improvisation interests him.

“I often find myself just messing around, dancing to music that is nothing to do with Irish dance. Hopefully, this will eventually turn into a new piece for our dance company…I put on the music and just wait to see what happens next.”