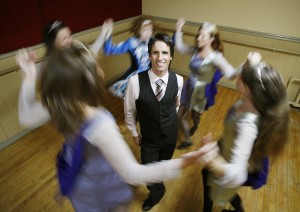 Respected dancer and choreographer Shawn Silver is feeling as high as one of his own fabled leaps. Having established his Canada-based company iDance in Australia, Silver will next take his Irish dance school to China.

Known for his work with Magic of Ireland, Riverdance, and his own touring show, Talamh an Eisc, Silver is credited with reviving Irish dance in his home province of Newfoundland and Labrador and making it mainstream elsewhere.

The most easterly point in North America, Newfoundland has a strong Irish culture. Silver boasts Irish, Portuguese and Welsh heritage and was first inspired by the dancing skills of his dad and grandfather.

He calls himself “a modern dance master” like the travelling Irish masters of old. His many international successes include establishing iDance Ireland, iDance Portugal and iDance America.

Exploring other traditions is a joy.

“In Portugal there is a burgeoning traditional Celtic dance community,” he says.“In Iceland, when we performed in Reykjavik, a quarter of the country’s population came to watch. They’d never seen Irish dancing live.”

“The Chinese have some incredible dancing,” he says. “We saw a glimpse during the Beijing Olympics. Shows like Riverdance are popular. There’s even a Chinese version of Riverdance but with the music altered to suit the audience.”

Silver’s new ventures are especially precious given that four years ago he almost died in a car crash.

It was a sunny December day in Newfoundland when Silver skidded on black ice while en route to a performance.

“I felt like I was in a washing machine,” he recalls. “As soon as the car flipped, I felt a deep, harsh thud in my back, bounced several hundred feet, and cars smashed around me.”

He was in a coma for several weeks and woke to find he remembered no one – not even his long-time partner, Bruce Pearce. Two of his vertebrae were smashed and doctors thought he would be paralyzed, but the strong dancer’s muscles in his lower back held his bones in place.

Just three months later, he performed at a Saint Patrick’s Day show. Recovery was painful, but he was accustomed to pain.

“I’ve broken legs and feet dancing,” he says. “Once I knew there would be no paralysis I was unstoppable. I didn’t want to be the guy who used to dance.”

Gradually, his memory also improved, although he now pieces dance routines together, “like a quilt”.

The accident brought him even closer to his large family of 13 and Bruce, who acted as caregiver.

“I remember the fear in Bruce’s eyes and the compassion,” he says. “Faced with that situation, you feel helpless, a burden. He showed me strength, love and support, and became my hands.”

That he is dancing again seems incredible good fortune to the performer who also loves math and once worked as a financial broker.

He tells youngsters to follow their dreams and says dancing defines him.

“It’s a language to me. When I’m dancing hard and moving across the floor I almost feel I can float. I love to share it and I love to teach it. It’s in me and it just won’t leave.”