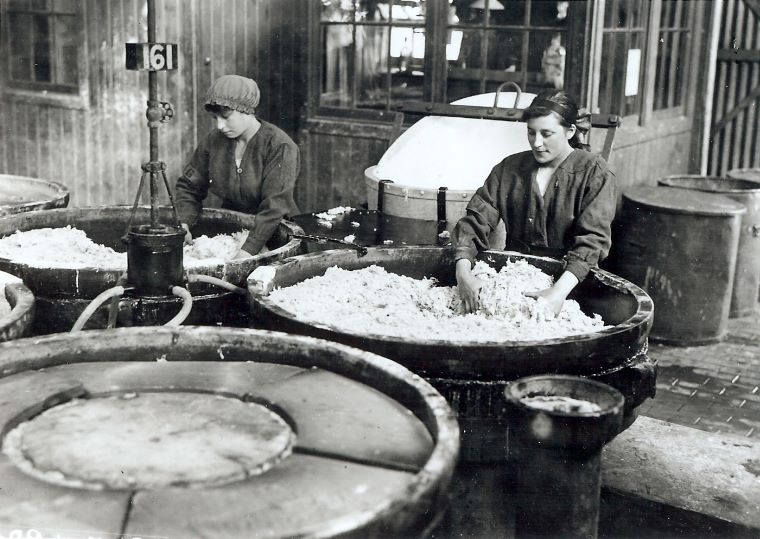 In the township of Eastriggs in southwest Scotland there is a small purpose-built museum dedicated to one of the most amazing and secretive stories of WWI. It tells a tale of 10,000 navvies, the biggest explosives manufacturing site in the world, state controlled public houses, canary girls, women’s rights and one of the greatest social experiments of its time. It is the story of…The Devil’s Porridge.

In March of 1915, the British Army launched its first major, planned offensive of WWI against German lines at the village of Neuve Chapelle in the north of France. The attack commenced with the largest artillery bombardment in the British Army’s history and, although the Germans were pushed out of the village, the advance ground to a rapid halt. Casualty numbers on both sides were horrific. The failure to capitalize on the success of the battle was put down to mostly a lack of ammunition – the British Army had simply run out of shells.

Back in Blighty there was public outrage and the press rounded on the government. Future Prime Minister David Lloyd George was appointed Minister of Munitions and was tasked with finding a solution to the ‘Shells Crisis’. 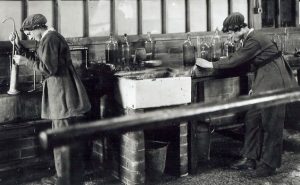 At the outset of war, munitions factories were dotted around the country. However, WWI proved to be a different type of war; this was industrialized warfare and it necessitated industrialized solutions. Lloyd George set about finding a new site for the largest munitions factory of its time. The site needed to be away from population centres – beyond the range of enemy Zeppelin attacks – and have access to established rail links to enable the flow of goods to and from the factory. In May 1915 a site along the Scottish shoreline of the Solway Firth was chosen. It was nine miles (14.5 km) long by two miles (3.2 km) wide and stretched almost from Annan, Scotland in the west to Longtown, England in the east. The area was flat, rural, largely unused, could connect with existing rail routes and had access to large quantities of coal. Crossing the Solway Firth an existing railway viaduct connecting Scotland and England facilitated the installation of anti-submarine nets across the estuary. Importantly, the site also ran alongside the River Esk – a source of essential water. It would become known as H.M. Factory Gretna.

Work started on site in November 1915 with the help of 10,000 – mostly Irish – navvies attracted by the good wages on offer. The project involved laying 13o miles of railway track, 30 miles of road, and 100 miles of water mains as well as a purpose-built power station, manufacturing units, warehousing, barrack style accommodation for the workers and the creation of two new townships at Eastriggs and Gretna. Acclaimed engineer, architect and town planner Raymond Unwin, a proponent of the Garden City Movement, master-planned the townships. The designs were a far cry from the industrial towns of previous generations and heralded a new approach where the welfare of workers was considered important. There were green spaces, cinemas, community halls, churches, central kitchens and a bakery.

The purpose of the factory was to produce cordite – a cord-like material that provided the explosive charge in everything from bullets to artillery shells. This required the mixing of acids, nitro-glycerine, and gun cotton to create cordite paste that could then be extruded into strands of varying lengths and thicknesses before being dried and packed. As the process was inherently dangerous, and the risk of accidents and death high, the site layout was designed on the dispersion principle – i.e. lots of individual buildings spread over a large area – thus restricting damage in the event of an explosion.

The construction phase brought unexpected challenges. Many of the 10,000 navvies lodged in Annan, Longtown and Carlisle. 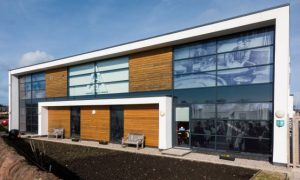 The labour was physically demanding, and it wasn’t long before the hard work was accompanied by hard drinking.

The government, keen to maintain civil liberties – while not endangering the war effort – took control of all the breweries and licensed premises in the Carlisle, Gretna and Annan areas. Under the State Management Scheme, public house managers were encouraged to make their premises more ‘family friendly’ and to sell food and provide other facilities such as bowling greens. Beer was supplied at reduced strength, buying chasers was prohibited, and patrons could only purchase alcohol for their own consumption as the buying of rounds of drinks was banned. Prices were controlled by the state, and advertising alcohol was banned. Known as the Carlisle Experiment – although it was started in Annan – the government only intended the scheme to extend 12 months beyond the end of the war. However, it lasted until 1973!

Despite the enormity of the construction phase, much of the work was completed by June 1916 when the first factory workers arrived. These were the working-class women who took up the gauntlet of ‘doing their bit’ for the war effort. Attracted by good wages, an opportunity to be independent, and in the knowledge that they were directly helping the men on the front line, they came from all over the country to work there. By August 1916 the first cordite was being produced, and by 1917 the factory was manufacturing 800 tons of it per week – more than all the other manufacturing sites in the U.K. combined. At its peak, the entire operation employed 30,000 people with 15,000 – mostly women – directly involved with the manufacture of munitions. At first the female workforce was housed in simple wooden huts with basic facilities, but later architect-designed, brick-built houses and hostels to a high standard were provided in Gretna and Eastriggs. The work was difficult, hard and dangerous; fumes from the chemicals were a constant problem affecting the eyes, nose and lungs, often causing breathing difficulties. Sometimes women would appear intoxicated and had to be taken outdoors to recover. Chemical burns from splashes were not uncommon and contact with acids and other chemicals could turn the skin yellow – earning some the nickname of ‘canary girls.’ Prolonged exposure to certain toxins caused gum disease and loss of teeth. Explosions were a constant hazard and the women were regularly searched and fined if caught with anything metallic on their presence that could cause a spark such as a hairgrip or button. It is known that there were at least seven recorded deaths from explosions on site and another thirteen directly attributable to factory work. It is unlikely the exact figures will ever be known.

Nobody knows the long-term damage that was done to the health of workers operating in conditions that would be deemed unacceptable today. 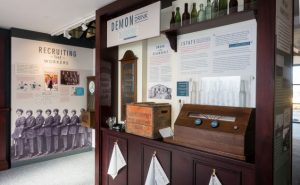 Arthur Conan Doyle – of Sherlock Holmes fame – visited the site and wrote an article about ‘A Miracle Town’ that was first published in The Times in November 1916. He referred to the cordite mix that the women stirred and kneaded in large pans as the ‘Devil’s Porridge’ and, noting the dangers they faced commented, ‘…it is a narrow margin here between life and death’. The size and commitment of the female workforce did much to improve the status of women in the early part of the twentieth century. Certainly, it reinforced Conan Doyle’s opinion that women should be given the right to vote, ‘…for those who have helped to save the State should be allowed to guide it’. Put simply, the war could not have been won without their efforts and it was a contributing factor to women being given the right to vote in 1918.

The factory ceased production in 1919 and today there is little that remains of one of the greatest factories on Earth. For Judith Hewitt, manager and curator of The Devil’s Porridge Museum, the museum plays an important role locally and nationally, “It preserves the forgotten heritage of an area and explains the largely untold role of women on the domestic front. For it was here as much as anywhere that the war was won.”