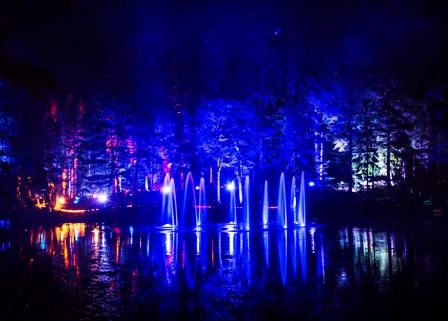 Dusk silences the birds of the forest. Moonbeams spear shivering autumn leaves, their twisted bodies spiraling down through the cool air. Strands of curling mist drift between twisted trees and something scurries past the toadstools at my feet. Twinkling lights play tag on the surface of a hidden lochan as gentle music entices the shadows to dance. This is The Enchanted Forest and there is magic in the air.

The Enchanted Forest is Scotland’s premier sound and light show that takes place every autumn in Faskally Wood near Pitlochry. Over several weeks as the sun fades, the forest comes to life in an amazing display of coordinated music, light, water and fire. Here, visitors are drawn into the world of pure escapism that lies deep within us all. It is every fairytale of childhood rolled into one. Such is the all-encompassing fantasy of this place that as I photographed mushroom sculptures changing colour one emitted a sudden puff of smoke that drifted upwards through the trees and a small excited voice piped up out of the darkness, “Look! The fairies have burned the toast!”

A shuttle bus service takes visitors from the centre of Pitlochry on the 10-minute journey to The Enchanted Forest with a recorded narration setting the scene on the way. On arrival, visitors are led to a twinkling forest path that meanders deeper into the woods.

It is a journey of suspense, bewilderment and excitement. Distant lights come into view and ethereal music drifts through the darkness. Then the path descends, curving around a large area of water where fountains shoot skyward, changing colour and dancing in time to the music. Jets of fire emerge from the dark water as if a mysterious dragon might be lurking just below the surface. Costumed characters pass by as the path continues. Inside a yurt, a storyteller weaves pictures with words while a little further a lamp-lit bridge returns voices in strange echoes. Aerial artists swing high in the trees while the amazed onlookers below enjoy a warming cup of mulled wine or hot chocolate in the chill air.

The walk through The Enchanted Forest takes a very leisurely hour to 90 minutes but there are few – and that includes the adults – who don’t do it all again for a second time before leaving.

Each year the event has a different theme and presents a significant challenge in coming up with an idea that will translate well through the use of water, fire, light and music. The latest theme was Elemental and Derek Allan, producer of the 2014 show, explained the design process.

“When planning the show, the creative team gets together: lighting designers, composers, sound designers and the producer and we brainstorm ideas to come up with a concept. We then research the idea on site, looking at potential places around the forest where equipment could go. Once that is decided we plan the route and create a master map with every single light – there are hundreds – on it.”

With the initial design established the production team then sends the plan to a specialist company that can deliver the technical aspects of the show, refine the proposals and provide accurate costs. The lighting design is of course only one part of the event. Creating the musical score and working alongside the various musicians to record the soundtrack and coordinate it with the various lighting effects is the next stage in the process.

Kate Bonney, Lighting Designer for Elemental, worked closely with the musical director who was responsible for producing the unique soundtracks for the event.

“Our musical director is involved at the very early concept stage to get a good understanding of what the themes are for that year and then works on composing music that captures the mood and atmosphere of those themes. Much later on, the light and sound come together in the forest. Once the lights are all in place and working, the next stage is to start programming them to synchronize with the music. The lighting designers spend a lot of time matching the lights with the music. It is a very collaborative process – a bit like being a choreographer. There is a lot less technology than people realize. It’s a lot more human than that.”

The end result is a stunningly well-coordinated spectacle and the recent Elemental theme was certainly well received.

Originally founded in 2002 at nearby Dunkeld, The Enchanted Forest attracted 2,500 visitors in its inaugural year. In 2005 the event relocated to its current site at Faskally Wood where it has been held ever since. Visitor numbers have grown year on year and in 2014 reached 45,000. For the third time in the last four years The Enchanted Forest has been awarded the accolade of Best Cultural Event in Scotland and at the Scottish Event Awards ceremony in Glasgow in October 2014 it also collected a Best Large Event commendation with its marketing agency Volpa winning a Best Marketing Strategy award. In addition it has also just won Best Event or Festival in the regional final for the North East of Scotland’s Scottish Thistle Awards and is hoping to add to its growing list of honours at the national final in a few months.

Since 2010 Highland Perthshire Area Community Interest Company (CIC) has managed The Enchanted Forest. CIC is a non-profit making organization run by a board of volunteer directors drawn from the local business community. It was created for the sole purpose of managing the increasingly successful event. The board’s main objective is to ensure that The Enchanted Forest is run to benefit local businesses and help promote tourism within the Perthshire and Highland area. The success of CIC is evident in the increasing visitor numbers and also in the fact that in 2014 The Enchanted Forest event alone raised some £2 million for the local economy with hotels, boarding houses and restaurants seeing a surge in bookings during the period of the event.

The Enchanted Forest is funded entirely through ticket sales, although, in recognition of the wider tourism benefits as well as the benefit to the local community, Event Scotland granted additional funding to the latest production. This was used to extend and further enhance the show with the addition of aerial artists.

Attracting such numbers of visitors over a period of a few short weeks also affords the opportunity for businesses to promote the other social, culture and environmental benefits of both the town and the wider community. Pitlochry has a population of around 3,000 residents although that number is boosted significantly in the summer months with an influx of tourists and the additional workers that they support. The town is also home to the famous Pitlochry Festival Theatre that draws visitors from all over the UK as well as further afield. Founded in a tent in 1951, its purpose-built home now occupies a prime location on the banks of the River Tummel and apart from hosting its own plays and musical events throughout the year it also promotes additional cultural festivals such as the annual literary Winter Words Festival.

From its early tourism beginnings as a Victorian spa town, Pitlochry has always had much to offer its summer visitors but an extended programme at the Festival Theatre and the magical Enchanted Forest now make this a place to visit at any time of year.