The Fastest Woman in the World 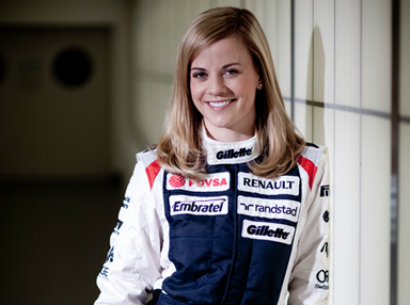 Susie Wolff might well be the fastest woman on the planet

“Blame it on my genes,” laughs Scottish-born racing car driver Susie Wolff over the phone from Europe.

“My dad raced motorbikes when I was a child in Oban, and we followed him around from track to track. The love for speed and excitement was in my blood from early on.”

Sure enough, it wasn’t long before Wolff took to the wheel herself, starting with karting in 1990 at the tender age of eight.

In 2002, she made the transition to single-seater racing in the Formula Renault 2.0 Series, winning the BRDC Rising Star Award in 2004. The following year, she switched gears to the British Formula Three International Series. In 2006, she stepped up to the challenging German Touring Car Series, a run that lasted until 2011.

Fortune would shine even brighter for Wolff in April of 2012, when she was named as a development driver for the world-renowned Williams Formula 1 team.

“It’s been a dream come true,” she shares. “Frank (Williams, owner) and the crew have become like family to me. They have been very supportive of my ambitions.”

While Wolff has yet to compete in the coveted class, she says it is only a matter of time before she goes wheel-to-wheel the world’s best drivers.

“It’s tough; there’s no spot on the grid for me this year, but I am patient and realistic and I will be ready when the time comes. For now, I am taking advantage of the opportunity to get out on the track when I can and learn as much about the car as possible.”

She shirks the idea that women are at a disadvantage in the male-dominated sport.

“As we’ve seen with Danica Patrick in NASCAR, there is openness to growth and change in North America that has maybe eluded us in Europe, where attitudes are traditionally a little more conservative. Still, I don’t feel like there’s any sort of ‘glass-ceiling’ here. And if there is, let’s see if I can break it.

“That said, I think it’s difficult for any driver, be they a man or woman. Racing, and especially F1, is not just about having the talent and getting on the grid, it also has to make commercial sense.”

Despite the dangers inherent to her profession, Wolff’s experiences have given her a profound reverence for the risks.

“I have respect for the car and for the people I race against, and I understand that big accidents could happen. But I never feel fear or try to think too much when I’m out there. The moment I have any doubt is the time for me to call it a career.

“My family, friends and my husband know what’s involved, and they might be a little on edge about it sometimes, but they have always been very supportive of my vocation.”

“Still,” she adds, “the safety standards in this sport today are years ahead of what they were in years past. The risks are there, but they are quite minimal, really.”

“And compared to motorbike racing, what I do seems like a walk in the park.”