The Fighting Irish of Notre Dame 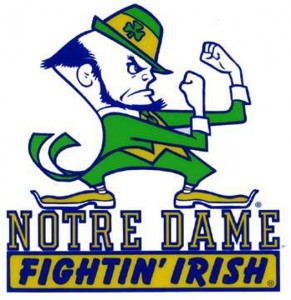 The University of Notre Dame football team – who take on Alabama Sooners tonight in the US College BCS title game – has always been known as the “Fighting Irish.” They are cheered by a little leprechaun of an Irishman who dances about in a green suit with pointy shoes. The name dates back to the origins of Notre Dame’s founding, before it was known for its football team. There are several theories that surround how Notre Dame became the well-known “Fighting Irish.” Here are a few of the theories that surround the naming of Notre Dame.