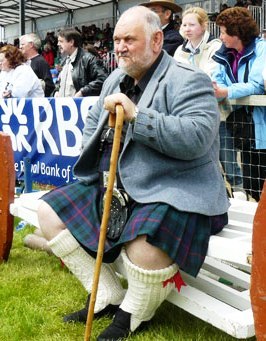 “It was amazing,” recalls the 71 year-old over the phone from his home in Glasgow, Scotland. “We had guys like Bill Kazmaier from America, Geoff Capes from England, Dave Harrington from Canada, and a local Nigerian – Christopher Okonkwo – who had competed at the Munich Olympics in 1972. The festival chieftain was the Nigerian Minister for Sport, and the Nigerian Police Pipe Band performed. It was a real jamboree!”

Edmunds attended his first Highland games when he was 17. Since then, the “Godfather of Strongman” – and former two-time world caber champion – has competed in hundreds of Games.

“When I turned professional, that was the greatest thing I ever did,” he reminisces. “It opened up the international field, and I competed in America, Australia, Sweden – all sorts of places.”

He has also just finished writing another book, The Warrior Breed, which explores the history of Highland games.

“The games have become a global phenomenon…we have all these people with strange sounding names competing today – it’s wonderful.”

Sure enough, Highland games are now, literally, all over the map. The International Highland Games Federation (IHGF) is currently affiliated with 26 countries, including India, Chile, Singapore, Greece, Georgia, and Germany, with more expected to jump on board in the years ahead.

“It has really caught on,” says Francis Brebner, who founded the IHGF in 2001 to organize and sanction international championships for both amateur and professional participants. “In the past few years it has been amazing to witness countries like Hungary, Romania and Croatia adopting the games. These people now see the event as real tests of strength, skill and endurance.”

Originally from Peterhead, Scotland, Brebner himself competed in Highland games professionally for 18 years. Travelling has been a highlight for the seven-time world caber champion/two-time world record holder.

“After arriving in the town of Wipu, New Zealand, I felt as if I was in heaven,” he notes of one of his favourite competition spots. “I remember walking through the town and talking with all the shop owners and finding out they were all descendants of Scottish emigrants.”

The IHGF is an ever-evolving entity, regularly picking up new members. The Scottish Highland Games Brazil joined the federation earlier this year.

“It began with some classmates who discovered this competition on the internet and decided to make an amateur version at our school,” says Daniel Schreiner, one of the South American festival’s organizers. “It is a unique event in Brazil, and it’s something people wait for all year to participate in.”

The gathering’s 5th edition took place this July in Esteio, Rio Grande do Sul, with an agenda that included hammer throw, caber toss, broadsword dance, Braemar stone put, and backhold wrestling. A medieval festival and Scottish cuisine were also on tap. “I love the group games, such as the tug of war,” smiles Schreiner. “The crowd always goes crazy cheering.”

Cheering crowds are also part of the soundtrack for Switzerland’s Appowila Highland Games, a festival born from one man’s fascination with Scottish culture.

Martin “Mac” Tshirren, president of the event, says he fell in love with Scotland on his first of seven visits to the country. On one trip, he invited his closest friends to come along. Over beers at Biddy Mulligans pub in Edinburgh, the Swiss travellers founded the Appowila Association, which hosted its first Highland games in the town of Abtwil, Switzerland, in the fall of 2009.

“Biddy Mulligans has become a place of pilgrimage,” explains Tshirren. “Each time an Appowila member is travelling to Scotland, he has to drink at least one pint at the table where the group and games were founded.”

An affiliate of the Scottish Highland Games Association, the Swiss society currently has 138 members. Of the ten or so similar events in the country, the biennial Appowila is the biggest, attracting an estimated 16,000 visitors at their last games in 2013. Even more excitement is expected at this September’s gathering.

“We will be hosting the Swiss championships in piping and drumming, with three judges from the Royal Pipe Band Association of Scotland,” notes Tshirren. Other activities include a whisky tasting, a medieval market, pony rides for the kids, Irish folk music played by Serbian, German and Swiss bands, and heavy events featuring athletes from Norway, Scotland and Germany.