The Good Friday Peace Accord 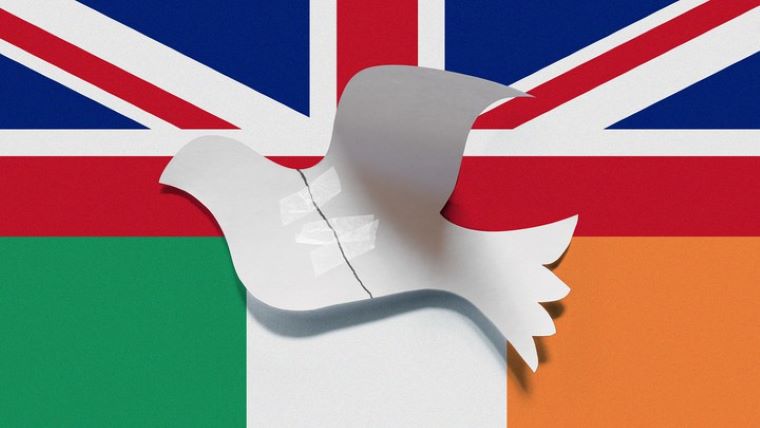 At the beginning of 1998, the prospects for peace in Northern Ireland were poor. To the untrained eye, plenty of positives had begun to emerge: multi-party talks had been established in June 1996; Irish Republican Army (IRA) paramilitaries had restored their ceasefire in July 1997; and, by September of that year, the political representatives of the republican and loyalist paramilitaries were engaged in the talks at Stormont in Belfast. While all were undoubtedly significant breakthroughs in the peace process, problems were still plentiful and a successful outcome appeared remote.

The Ulster Unionist Party (UUP), the largest political party in Northern Ireland at the time, refused to engage directly with negotiators from Sinn Féin, the political wing of the IRA. This was because the IRA had yet to give up its weapons – a process known as decommissioning. The Democratic Unionist Party (DUP) and the UK Unionist Party (UKUP) had earlier left the talks over the same issue. They also feared the negotiations might weaken Northern Ireland’s place within the United Kingdom.

There was also the very real possibility that negotiators for the loyalist paramilitaries would withdraw from the talks process. On 4 January the Ulster Defence Association (UDA) prisoners in the Maze prison took a vote on the matter, with two thirds in favour of withdrawal. The Ulster Unionist leader David Trimble went to the Maze to talk to them but he was unable to persuade them to change their minds. Remarkably, following a request from the leader of the Ulster Democratic Party (UDP), which represented the UDA, the Secretary of State for Northern Ireland, Mo Mowlam, made the same journey herself. It later transpired that Mowlam did not consult Prime Minister Tony Blair or any of his aides ahead of this unprecedented step. Blair’s chief of staff, Jonathan Powell, recalled: “If she had asked us we would certainly have said no. But in the event she was right and we were wrong.” Her engagement with the paramilitary prisoners assured them that their concerns were being taken seriously at the highest level and a potentially show-stopping hurdle was overcome. 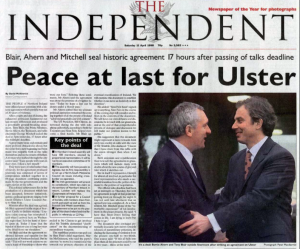 The involvement of the UDA and IRA in further killings in January and February 1998 led to the exclusion of their political representatives, the UDP and Sinn Féin, from negotiations. Talks were stalled yet again. Frustrated at the lack of any real progress, the talks’ chairman, former US Senator George Mitchell, concluded that a deadline was crucial to securing a settlement. After persuading all the participants to agree, Mitchell set it at the stroke of midnight on Thursday 9 April. The final week was to prove a hectic and dramatic finale to a process which had begun almost two years earlier. At half past midnight on Tuesday 7 April 1998, Mitchell presented the negotiating teams with a 65-page draft document for consideration as the basis for the final round of negotiations. It was rejected by the unionist parties. This prompted British Prime Minister Tony Blair and the Irish Prime Minister Bertie Ahern to join the negotiating parties at Stormont. The Thursday midnight deadline passed as the parties increased pressure on both governments to get the best possible deal.

In the early hours of Good Friday, the Ulster Unionist team was still unhappy with some of the detail, particularly the sections dealing with the decommissioning of paramilitary weapons and the release of paramilitary prisoners. A personal assurance from Tony Blair to UUP leader David Trimble smoothed these last ripples of discontent. At 5.30pm on Friday 10 April 1998, George Mitchell stated: “I am pleased to announce that the two governments and the political parties in Northern Ireland have reached agreement”. The Belfast Agreement (or Good Friday Agreement as it would become known) contained proposals for a Northern Ireland Assembly with a power-sharing executive, new cross-border institutions with the Republic of Ireland and a body linking devolved assemblies across the UK with Westminster and Dublin. The Republic of Ireland has also agreed to drop its constitutional claim to the six counties which formed Northern Ireland. There were also proposals on the decommissioning of paramilitary weapons, the future of policing in Northern Ireland and the early release of paramilitary prisoners.

Although the Democratic Unionist Party was the only major party in Northern Ireland to oppose the agreement (along with the more marginal UKUP), both the UUP and Sinn Féin said that they would have to refer the document to their wider memberships before signing up to the deal. While UUP leader David Trimble received the support of his wider party for the deal, he lost the support of six of the party’s ten members of parliament. These dissenters joined forces with the DUP and the UKUP to campaign for a ‘No’ vote in the referendum which was to follow on 22 May 1998. Referendums were held on the same day in both Northern Ireland and the Republic of Ireland. In the north, voters were asked to ratify the deal. In the south, they were asked to approve a change to the constitution of Ireland. All sides agreed a credible majority was required if the deal was to survive. While most nationalists and republicans were clearly in favour, a unionist and loyalist majority was far from certain. In Northern Ireland, campaigning was fierce as DUP leader Ian Paisley urged a ‘No’ vote to safeguard the union. The ‘Yes’ camp, by necessity carrying a more mixed message in attempting to appeal to both sides of the community, only really gathered steam days before the vote. In an iconic moment at a rock concert in Belfast, Irish rock star Bono managed to cajole David Trimble and John Hume (leader of the nationalist SDLP) to appear alongside him onstage, the three linking arms as the crowd cheered. In Northern Ireland, 676,966 people voted in favour of the deal, while 274,879 voted against. The ‘yes’ vote was 71.12%. Turnout was a record 81.10%. In the Republic the recorded ‘yes’ vote was 94.39%, with 1,442,583 people voting in favour and 85,748 voting against. 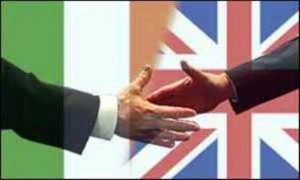 Elections to a new 108-member assembly to sit in the Parliament Buildings at Stormont swiftly followed on 25 June 1998. The assembly would be the centre of power in the new Northern Ireland and would elect the new power-sharing executive. Its rules were unconventional. No one party would be able to control the assembly. Decisions would have to be taken on the basis of parallel consent, requiring the endorsement of a majority of nationalists and a majority of unionists. So instead of fighting an election to win control of the assembly, the parties fought a campaign to win over ‘their side’, with non-aligned parties such as the Alliance Party designated as ‘others’. Sixteen parties, and more than a dozen independents, vied for six seats in each of Northern Ireland’s 18 constituencies. The UUP got the most seats with 28, followed by the SDLP with 24, the DUP with 20, Sinn Fein with 18, Alliance with six, UKUP with five, independent (anti-agreement) unionists with three, and two seats each for the Progressive Unionist Party (PUP) and the Women’s Coalition. With 58 seats won on the unionist side, David Trimble would become First Minister, with the SDLP’s Seamus Mallon as Deputy First Minister.

The Good Friday Agreement came into force in December 1998 when Northern Ireland’s politicians took their seats at the assembly in Stormont, but it would not be plain sailing from this point on. Disagreements over contentious issues like the annual unionist/loyalist Orange Order marches, policing and the decommissioning of paramilitary weapons occurred on a regular basis. There were also attacks from dissident paramilitaries who opposed the peace process, the worst of which was the atrocity in Omagh when a Real IRA bomb killed 29 people and unborn twins on a busy shopping street. The assembly stuttered on through three suspensions before a fourth suspension saw the re-introduction of direct rule from London in October 2002. Devolved government only returned to Northern Ireland in 2007 following the amendments known as the St Andrew’s Agreement in 2006. When the assembly returned to business in March 2007, it was one of political extremes. The loyalist DUP’s Ian Paisley became First Minister and republican Sinn Féin’s Martin McGuinness the Deputy First Minister. It was a political alignment of polar opposites that would have been unimaginable in 1998 and a sign of just how far Northern Ireland had come from the darkest days of the Troubles.