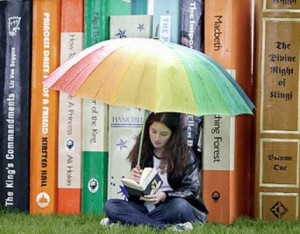 Situated so close to the national border that it nudges England, the Welsh town of Hay-on-Wye offers views of some of the most beautiful countryside in Britain. It’s a rural idyll, but this tiny community of fewer than 2,000 is also known as The Town of Books and for 10 days every spring it is swollen by the world’s bibliophiles, who gather for the famous Hay Festival.

Each year, around 85,000 book-lovers arrive in Hay to enjoy the writing of poets, novelists, lyricists and scientists, comedians and environmentalists.

“It’s all about celebrating the power of great ideas to transform our way of thinking,” explained festival director Peter Florence. “Hay is, in Bill Clinton’s phrase, The Woodstock of the mind.”

This year is the festival’s 26th and the program of 500 events will be held between May 23 and June 2. Notable attendees will include novelist John le Carre, journalist Carl Bernstein and comedian Dara O’Briain. The festival also includes Hay Fever, an event for families and children, and Hf2, a festival for teens, offering high-tech workshops in music and film as well as sessions with cutting-edge writers.

The events are held in a tented festival village, a space that allows the crowds to come together to discuss ideas, eat, drink and be merry. Hay is an easy place to be merry. The charming 800-year-old town is known for its bookstores (there are more than 30, many selling specialist or used books) and pubs (there are six) as well as two Norman castles, restaurants, galleries and antique stores. When weary of wandering Hay’s narrow streets, visitors can explore the glorious scenery that surrounds the town. Options include Brecon Beacons National Park, the Black Mountains, the hills of Radnorshire and the Golden Valley.

The Hay event is also linked to other festivals around the world as Hay employees now run 15 festivals across five continents, attracting a total of 250,000 attendees. This year’s international events began with January’s Hay Festival Cartagena de Indias in Colombia. Florence said that at all the events current political thought and the ideas of writers combine to blur boundaries of culture and genre and foster mutual understanding and the exchange of ideas.

“The more we learn about cultures abroad the more we want to learn, so the appetite to bust out of little Britainism keeps growing,” Florence said. “The English Language seems so powerful and dominant that it’s easy to forget that it’s spoken by less than 10 per cent of the people in the world, and that every other culture has their Shakespeares and Mantels and Austens and Stoppards too. And that’s an amazing wealth of stories to explore.”

At each of the international festivals, Hay staff work closely with local teams or partners.

“Every society has its own reality and we work to nurture the free voices and thinking wherever we set up our tents,” Florence said. “There are different models for each culture, but the driving force is to provide a place for people to meet and to have conversations that wouldn’t otherwise happen, and to share new stories and ideas — to imagine the world differently.”

The Welsh festival is driven by the loyal and demanding audience in Wales, Florence said. Media support has been integral to the festival’s success, although when visitors are asked how they learned about the festival, 82 per cent say they heard from a friend.

“The aim is to manage both that word-of-mouth and the media communications so that the growth of the physical, face-to-face festival can be married to an extended reach through new media.”

Hay-on-Wye’s association with books began with bibliophile Richard Booth, who opened his first book store in Hay in 1961. In 1977, Booth declared the town independent and himself its king. Many credit the publicity around his stunt with the growth of the town’s reputation as a bibliophile’s paradise.

Situated as it is at the border of Wales and England, Hay has endured a tumultuous past, often suffering at the hands of Welsh patriots, English aristocrats and monarchs. It is interesting that this little town, so long a pawn in parochial power struggles, is now known for fostering a tolerant, global outlook.