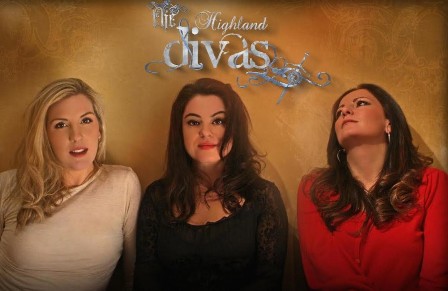 When The Highland Divas take the stage at The Metropolitan Room in New York City tonight, listeners will fall in love with the folk music of Ireland, Scotland & New Zealand. Recently we spoke with the trio – Georgia Johnson, Margaret Kelly & Marla Kavanaugh – about their diverse musical backgrounds and common heritage.

When and why did you start performing music?
Marla –   My first professional singing engagement was at a 7 years old for an international singing teacher’s conference with my identical twin sister, Marissa. But our Mum says, “we sang before we could talk.” We performed all over the place after that & on national television. Marissa & I sang because it was the most natural and fulfilling expression of our soul. Our Mum is an Opera Singer, so music was a natural outpouring in the house.
Georgia – I was always performing and singing my heart out in my own wee world from a young age. I had danced from the age of 2, so music was always a huge part of my life and at 14 years old I started singing lessons and it just took off from there. Singing for me was everything, the training gave me the tools, but the music was deep in my soul and when I sang I felt alive. It was my connection to the world.
Margaret – I have been singing professionally since the age of 16. But I believe when I came out the womb! It all started for me when I was in a group called the Cabbage Patch Kids. I sang for the first time to a live audience and I was hooked! I always knew this was my life.  My father, God rest his soul, was a singer.  I never had the pleasure to really hear what my Dad could do but I believe I take my talent from him. My mother and father always told me that I have a God Given Talent and it was a sin to waste it. So, I followed my dreams  and career to the big apple! And pursued them!  Singing and touching peoples hearts and souls is what I want to achieve in life with my gift!

What are the challenges of the vocation?
Marla – the challenges are that you are always on the lookout for you next job. It has to be a vocation fueled by passion as it is all – consuming. Really, a 24/7 thought process & action. “If I talk or drink too much today (or sing too much!) I’ll be vocally tired tomorrow!” You always protecting your voice as it’s housed inside your body. As a virtually self- produced new act, we spend a lot of time trying to get our music “out there” as well.

What are the rewards?
Georgia – doing what we love! Watching people respond to our music and harmonies with tears, real catharsis and, standing ovations! We want to move and connect to people with our singing. That is why we do it.

How long has the band been around?
Margaret – we started The Highland Divas in early 2012. Our first discussions were at a little Italian restaurant on 46th street in the Broadway/Theater district.

How has the group evolved since then?
Marla – A lot! We originally planned to have my twin sister as the “third diva” but commitments in Australia meant that was unable to happen. From there we had two other women before we found Georgia, who is the perfect fit for us vocally & in temperament. We really are all very close friends!

How would you describe your sound today?
Georgia – an audience member actually coined the phrase; “we are “Pop/Rock/Op” meaning the basis of the trio is very close 3 part harmonies, but we all have break out moments that are Pop Diva, Rock Diva and Opera Diva! It’s such a great show as we cover so many musical styles while bringing out the gorgeous Celtic music of particularly  Scotland + Ireland and New Zealand.

Where do you typically perform?
Marla – a variety of venues. Everything from private events for Charities with 100 or so guests to large performing arts venues with upwards of 2500 people.

What is the response like from audiences?
Margaret – it means so much to me, to all of us, that people are really moved by our arrangements and our singing. Audience response ranges from full out tears and hand holding – to rolling laughter – to standing ovations. We are 3 women who think the world of each other so our natural chemistry comes across. People feel that during our show. We sing our hearts out, but we are very down to earth, dare I say it, funny gals. We love what we do and we love our audiences.

What are your thoughts on the current state of Celtic music?
Marla – most recently Celtic Thunder, Celtic Woman & the High Kings have done a lot to bring Celtic Music to theirs & hearts of America . We would love to be the group that shows America & the world that Celtic music is global. It can transcend so many countries as so many people are in fact, part Irish or Scottish. The incredible legacy of Celtic music is that it has influenced so many countries because we are everywhere! I have always believed that there is a rhythmic core at the heart of most music, be it Scottish/Irish/Greek/Moroccan than transcends culture and is in fact “World.” In the future, we would like to explore that space.

Is enough being done to preserve and promote Celtic culture?
Georgia – the gals & I have seen firsthand the great work that the American Scottish Foundation, St Andrews Society, the Irish Business Organization and the Irish Music Center are doing in New York. In the future, we would like to see more support for these types of groups financially and more involvement from the Scots/Irish in the community. We try to get involved with these groups as much as we can. You can always do more!!

What can we be doing better?
Margaret – Well, Georgia just said it. We can call get more involved in groups that promote our shared culture in the US. We, in our small way, are trying to do that with music. We are proud to be new(ish) immigrants to America ~ but we want to keep our culture alive.