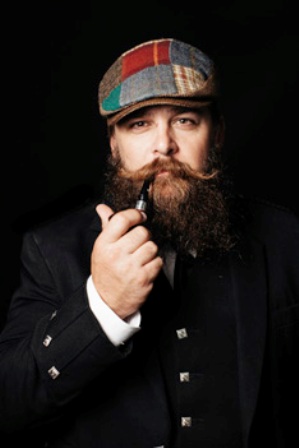 Southern California’s The Humble Hooligans aren’t your typical neighbourhood Irish band. Performing more than 200 live shows each year has made them one of the busiest and best Celt-Rock groups around. Recently we spoke with the band’s vocalist Troy Donham about music and other things Celtic.

What are your own roots?
My family’s history can be traced back to the 1300’s in County Meath. Several Great Grandfather’s ago one of them immigrated to New Jersey and my family slowly moved west. Proudly American Irish, understanding that our Irish history is more a part of our ingrained heritage than most recent relative from Ireland.

When and why did you start playing music?
I started young, singing at a very young age and with piano at age four. It was always about music on my father’s side of the family. I was adopted, and yet my adopted Grandfather was a brilliant Norwegian Accordion player who loved Irish standards, Danny Boy, When Irish Eyes Are Smiling, and My Wild Irish Rose were often heard pouring out from his house. It wasn’t until I was 19 that I learned of my Irish heritage and shifted my music from the local alternative scene to traditional and contemporary Irish music. I drank it up, falling in love with the stories and the rhythms.

Are they the same reasons you do it today?
Honestly, it’s just a passion I have for the culture and the tradition. When I go into a pub and see the people looking up at the stage, I know that there are people in the crowd who don’t know the tradition of the music, or the deep respect for the story. It’s the reactions of the people, the smiles and light in their eyes that make me play. I can honestly say that the reason I got into the music still holds true, memories of my grandfather, the great joy and infinite sadness that can be found within Irish music that will always keep me coming back.

How long has the band been around?
2014 was our 10th year anniversary. We’ve played upwards of 1,500 shows from Arizona, California, Nevada and Hawaii to every nook and cranny in-between. We have released four albums, two live, one a traditional album with standard pub songs and an EP of Original music. I have also just released my first solo album “Special Reserve” which came out last week. The band plays a lot of the tunes and we’re working on a new music video for the album. In addition we’re getting back into the studio for a release in the first half of 2015.

How has the group evolved since that time?
Besides member turnover there has been great change in the musical style. I think that everyone in this band realizes that if we stop learning and stop growing then we effectively stop making interesting music. That is one of the main reason I released a solo album. The songs needed to be released so I could move on and work on new and exciting music. Another way the band has evolved is with our instrumentation. We started as a four piece with myself on guitar and mandolin. After a rather bumpy start, we were a duo for a short time, we added a very strong fiddle to carry the melody and I went almost exclusively to guitar. From the various incarnations of the band we adapted our sound to fit the instruments being played. Currently we have 5 members and a roving accordion player who plays with us for big shows. We’re set-up with myself playing guitar, mandolin and Irish tenor banjo, bass, drums, our new violinist also plays mandolin and guitar. She’s classically trained and from Romania but really enjoys the folk aspects of the music, and lastly a banjo player who doubles on bass and mandolin. The flexibility of these players is what makes The Humble Hooligans stand out. Each one is so musically talented (and insatiably driven) that I feel blessed just to play on the same stage.

Why the decision to start performing Celtic music?
I had recently learned of my Irish background, and how my family stayed fairly true to the culture and heritage, my grandfather was even named after the famed Irish boxer Jack Dempsy (Donham). I was at a point in my life where I was looking for a connection to something tangible. California is all about the quick pace and movers and shakers and I wanted to find my roots in something that I could get behind. I lived next door to a bass player for a local Irish band The American Wake. The moment I attended my first show I knew that this was where I wanted to be, playing Irish inspired music in pubs and venues. I immediately started writing songs in what I hoped was a Celtic voicing. I enveloped myself in Irish culture, literature, television, movies and drama. I made a point to become knowledgeable on anything to do with Irish music, from the Pogues to The Dubliners, John Doyle, and Christy Moore. It was as if my eyes were open for the first time and I had found something I could truly relate to.

How would you describe your sound today?
This is a great question, and one that haunts bands today. Who do you sound like? What kind of music do you play? To be honest, we’ve found ourselves best described as a Pub Rock Band. We’ve infused elements of traditional Irish music in standards like Whiskey in the Jar, I’ll Tell Me Ma and rebel songs like Fields of Athenry and Come Out Ye Black and Tans combining contemporary elements and stylistic features from bands like Flogging Molly, The Pogues and The Dropkick Murphy’s also gives us that rocking feel. One thing that has always held true about The Humble Hooligans is our commitment to traditional folk style. With the exception of our bass player, we all play acoustic instruments and it’s always been a feature of our band, which gives us a more folk approach to some of the more rocking and punk style songs. In a nutshell, we’re a high energy Irish Pub Rock band. It has been said by a fan that we are what it would sound like if “the Young Dubliners and Great Big Sea had a baby”, just food for thought.

Is your creative process more ‘inspirational’ or ‘perspirational’?
This is a great question! I think both. Some music is born out of inspiration. I’ll write a song based on an idea or event that happened, and some music is born on stage, allowing the band to create as we perform. That would definitely be ‘perspirational’ since there is no place I know more sweaty then under the hot stage lights. I think a good balance between both forms keeps the music moving, but when the mood or muse strikes smart money is on capturing it in the moment.

What makes a good song?
This depends on who you are and what drives you. I constantly have this conversation with my drummer. He looks at everything from a very analytical perspective, beats and measures, structure and form. For him a song that is unique and well planned would be one that draws him in. He also likes dynamics and moving parts with swelling and falling sound and big booming sections. For myself I want the story, the emotion. For me to make a connection to a song, the words have to mean something. The title track to my solo album “Special Reserve” has a line that I love, and it’s very poignant for the whole album “It’s not what makes a man they say, still trouble finds us anyway, reach in your heart and you will find a special reserve”. On the surface its a thinly veiled metaphor for a special reserve whiskey, but in truth, its about that “special reserve” each one of us has within ourselves.

What does the band have on tap for the rest of 2014 and into 2015?
Well, it’s already been an amazing year! We released or EP ‘Break Through’ in February, ‘Special Reserve’ came out this month September 21st. We also just released our first music video ‘Sweet Magdalene’ which can be seen on our Youtube channel The Humble Hooligans. In addition to that I’m self publishing my first novel ‘The Key Holder’ which will be for sale on the band website. The band is using it to help fund our endeavors for 2014 into next year. As for what’s on tap, this year we have two more huge events, the first week in October the largest Pirate festival on the west coast, Buccaneer Days on Catalina Island and on top of that we’re opening for the Tossers on October. 12th.  For 2015 we have a new album coming out, our second Hawaiian tour, our first European tour (45 dates) one or two music videos depending on time frame, and a short east coast tour plus (hopefully) a new publication of a traditional Irish fake book so people can see what we’re doing and get their hands on some easy to read music charts to help spread our love of this great music even further. We’re so excited to be doing as much as we are and so thankful to our fans who have supported us to the point of exhaustion!

Is enough being done to preserve and promote Celtic culture?
Saving the toughest question for the end? In America we love Irish culture and preserve it, promotion is another animal entirely. Moreover I think there is a major disconnect between people from Ireland and American Irish. When I was in Dublin no one is playing Irish music, it’s all American contemporary music. You have to find a pub (usually filled with tourist, not locals, to get any semblance of Irish music). There’s also this idea of ‘Plastic Paddy’ which I personally find very offensive. Because I have love and passion for the culture from which I came but because I’m not connected to Ireland by any relatives I’m not allowed to be ‘Irish’? The reason people left Ireland was economic, Ireland was being starved, food was scarce, thousands of people died, but because the American Irish were able to escape poverty and starvation we’re now branded with a label to separate what, the true Irish? Culturally, both sides should be promoting the heritage, the love of music and arts, theater, literature. We should be raising up our heroes like Luke Kelly and Ronnie Drew, Shane MacGowan, and Christy Moore, not to forget the great writers, and never forget we all have a deep love for the place, people, and the culture. Most folks from Ireland find it funny when I say I’m American Irish instead of Irish American. I place my affiliation to America first, I was born here, and I’m not an Irish citizen, but I know culturally I’m Irish at heart, no matter the label that is placed on me.

What can we be doing better?
Exactly what we are doing today, talking about music inspired by Irish culture. Attending shows, plays and events that celebrate this beautiful art. Embracing one another in the community and raising each one of us up to shine. The world is a discord, let us find community within love of something beautiful, not hatred for someone else.