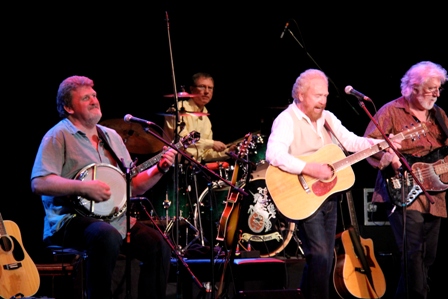 The title of a classic Irish folk song turned out to be the perfect name for The Irish Rovers whose members have spent almost five decades touring the globe. Formed in Toronto in 1963, the Canadian-Irish folk group has helped popularize Irish music around the world. But now, the band is bidding a slow farewell to life on the road. Frontman and songwriter George Millar talks to Melanie Furlong about the Rovers’ long career.

In recent years, the Rovers have undertaken three major tours annually with each tour lasting about six weeks. “It used to be a lot more in our younger days,” said Millar, who has been with the band from the start, “but even three major tours take a toll on the body. It’s for a young man.”

That’s why the Rovers have decided to take a step back and hang up the walking shoes.

“We’re going to finish our final tour in 2015,” Millar said. “We will still be doing a CD now and again and we’ll still be doing public appearances for festivals and things like that. We’re getting away from the everyday grind.”

The Rovers have always attracted crowds in Canada’s Atlantic Provinces, where many residents have Celtic roots, so the Rovers’ final tour of the region will be a nostalgic affair. It will begin in Newfoundland this fall and continue on into the United States. The band may include Australia and New Zealand in their 2014 itinerary and will finish back in Canada in 2015.

The band members owe their fans no apologies for slowing down. In all their years of touring, none of the band ever missed a performance–except for the odd cancellation caused by a flood or hurricane.

“We’re very proud of that,” Millar said. “You can be sick and sore, but when you get to the stage you have to do the same show. People are there to be entertained. They’ve paid their money so you have to bring the same energy on stage and enjoy yourself.”

Making sure their audiences have fun is an art The Rovers have perfected over the years. Millar said one way they’ve contributed to the current Celtic music culture in North America is by making people aware that Irish music is so much fun.

“We could have been singing about some poor Irish guy in the 1700s that got hung, drawn and quartered, and as we’re singing it on stage I notice the people are clapping their hands because of the upbeat tempo,” he said. “I’m saying to myself, they don’t understand a bloody thing we’re singing about! It’s a happy-sounding music; I think that’s why it’s been around for so long.”

The original band of musicians, all of whom emigrated from Ireland to Canada in the early 1960s to avoid the political conflict in their divided country, became well known for their ability to have fun wherever they went.

Bob Hallett, of the Newfoundland band Great Big Sea, recently paid tribute to the Rovers. “You know it’s one thing to play music, it’s another thing to play it with enthusiasm and energy and to do it for so long…”

The members of the Rovers are both Catholic and Protestant and they have never tried to use the stage as a political platform. Standing together has been enough.

“We left Ireland to get away from all that,” said Millar. “We’re not a political band and religion was always a non-issue for us. We sing songs like The Orange and the Green (about a boy with a Catholic mother and a Protestant father) and try to have fun ourselves for two hours on stage. People don’t walk away pondering things. If they walk away whistling Drunken Sailor, we’ve done our job properly.”

Although the members of the band are “ever-changing,” according to Millar, no one seems to mind as long as they’re hearing favourites like The Black Velvet Band, Wasn’t That a Party and The Unicorn. “There are still two or three of us that are the originals,” said Millar. “And if the audience is hearing what they want to hear, then they are satisfied and happy.”

Millar first played as an Irish Rover in Toronto in 1963 when he and Jimmy Ferguson met and entered a talent show together. The pair won the contest and Millar enlisted his cousin Joe Millar to join the band and, after travelling to Calgary, his brother, Will Millar. The group found major success in 1968 with a song written by beatnik poet Shel Silverstein called The Unicorn.

“We were sparse on The Unicorn,” said Millar. “I played the rhythm guitar, Glen Campbell played lead guitar, my cousin Joe Millar played the harmonica and we brought in a bass player. There were no drums or anything else on that little song that became such a magical giant all over the world.”

Since then, the Rovers have been on many stages and had countless career highlights, but The Unicorn remains one of the pinnacles. “That song took us out of the folk clubs of the day and put us onto the stages of the world,” said Millar.

Ten years after The Unicorn, Wasn’t That a Party was another unexpected hit, followed quickly by Grandma Got Run Over By a Reindeer, written by Randy Brooks. “All our hits were unexpected hits,” Millar revealed, “because groups like us don’t normally get played on rock n’ roll or country channels. There’s nowhere to play us really. So, to get these major hits coming out of a band like us are highlights you couldn’t forget.”