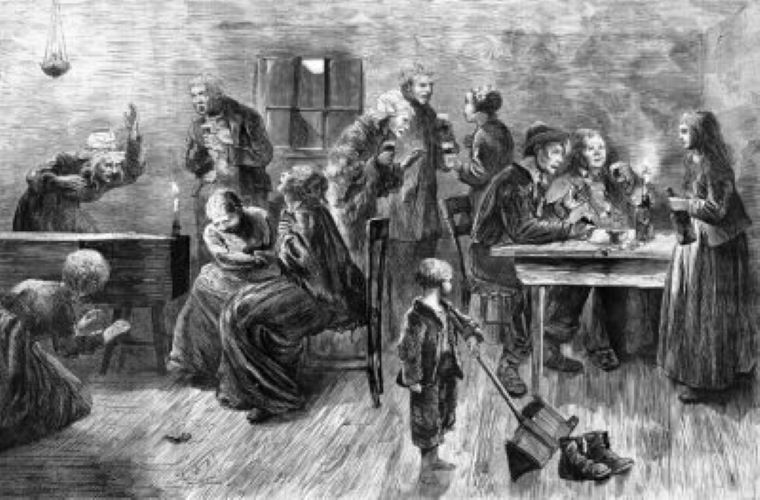 The Irish custom of “waking the dead” has long been thought off as a purely Irish tradition, and many would argue that this is, indeed, the case. However, if we look at paganism, spiritualism and other religions, it is not too hard to find similarities in their traditions with ‘waking the dead. “They believe that the physical death of a person is not the end of life; it is purely a fundamental process that starts at the very beginning of life – when we are conceived. They believe that the cells in our bodies are endlessly dying and being replaced over a lifetime; therefore, as our appearances and attitudes change and we learn more, we experience many deaths in out physical appearances, and therefore in our lives. The person that dies is not the body that was born; it is only one of the many people that we have become during our lifetime on earth.

We as Christians and many other religions also believe that when the physical body dies; it is not the end of that person; spiritualists and other religions believe that there is life after death, as do most Christians. So why we, as Irish people, and other cultures, for example, Asian, English, and Canadian friends, always make the claim that going to an “Irish Wake” is an experience that one will never forget? Is this, perhaps, because the “Wake” has become known for its association with Ireland, and thus the legend carries on.

The origin of the “Irish Wake” as we know it is generally unknown. It is thought to have been heavily influenced by element of paganism in its rituals, and was therefore very much frowned on by the Church. Some sources claim that the ‘wake’ has its origins in the ancient Jewish custom of leaving the sepulchre, or burial chamber, open and unsealed for three days before sealing it. This is too ensure that the person is truly dead and to allow the family and others to pay their respects to the dead person. 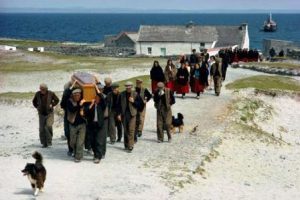 Other claims made [most probably folklore] are that the Irish tradition of the wake came about because of lead poisoning in pewter tanks — very prevalent in Ireland in bygone eras – holding beer and other beverages.  Due to the high level of lead in the pewter mug, many of the drinkers who used them would enter a ‘cationic state’ resembling death. The sufferer could regain consciousness after some hours or even days — hence the three-day ‘Wake.’  Other sources suggest there are many Irish rural folk who call the day their loved ones die as a third birthday.  Being born, often screaming into this life [first birthday]; then baptized [second birthday], and then death, when they enter eternal life — so on this third birthday, it is a cause for celebration.

During the Famine years and way before that really, cholera epidemics were prevalent and all over the world people were buried hastily – in order to rid the area of contamination. There are many documented accounts of people ‘woken up’ to scratch their way out of their burial spots with bloodied hands; hence, justifying, in this telling, the three-day wake.

So wherever the traditions originate, suffice it to say that many of these traditions still exist. The local priest would be called to give the last rites of the Church. If the person had died overnight, the priest would still be called to administer the Holy Oils and to recite the prayers for the dead.

From the black-edged envelope being pinned to the door to announce the death, there follow many more rituals. A room will be prepared to house the dead body.  The window will be opened to allow the spirit to move onto and into its eternal journey, and nobody must block the window, as this is thought to bring misfortune to whoever has blocked the spirit’s path to eternal life. The curtains will be drawn and the window will be shut again after two to three hours, so that the spirit does not return.

The body would then be washed with Holy Water, usually by a ‘handy woman’ – my maternal grandmother being one such woman.

The dead person would then have been dressed in a linen shroud, thus leaving all his worldly materialism behind. This is what was always known as ‘being laid out.’ If the deceased was male, he would be shaved. In most Roman Catholic homes, rosary beads would be wound around the hands with the crucifix   laid on the dead person’s chest.

The mirror would be either covered in a white sheet or a linen cloth or turned to face the wall — this is thought to hide the physical body from the dead body. As in life, we use mirrors to look at our appearances, so hence the now eternal body has no need for mirrors. 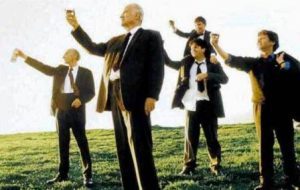 The undertaker will then be called – to provide a coffin [in many case it will have been the cheapest coffin]. Candles are then lit at the four corners of the coffin, and will remain lit until the body has been moved to the church. Women, for the most part, would be the keeners. [This was usually associated with the legend of the Banshees, where folklore has it that they came to keen for the people who are about to die — this practice has died out.] The body would not be left alone. When all this is completed; the family are then called together, to say prayers and sing, if they chose to, usually a hymn.

Once this has all been completed, the neighbours and friends are then invited in, or just call to pay their respects and offer their condolences. Then all the ribaldry would begin. Pipes would be passed around the group to aid the merriment. Tea and sandwiches would be made, with neighbours fetching in homemade cake and buns. Beer or poteen that had been brewed in the mountains would be offered, tales would be told about the dead person, and the naughtier it was, the more laughter ensued .

This would go on all that night, and the next day the body would be taken to the church, where it would be received by the priest and prayers would be said. The third day would be the funeral – with Mass being celebrated for the repose of the soul of the deceased.

The funeral party would then follow the coffin out of the church, and it would be placed in the hearse; in bygone eras, it would have been a horse-drawn hearse, with the males of the household walking behind. All the men and boys in the family would wear a black arm-band, with the women wearing black attire. If it was the husband of a woman who had died, she was expected to wear “widda’s weed’s” [widow’s weeds] for life. My maternal grandmother was one such woman.

Then, as now, the funeral party would either defer to the local pub or return to the family home, where the merriments would continue.

In present-day Ireland, funeral homes are pretty much the norm for town folk, while in rural areas some of the old traditions still prevail. The gathering or ‘the wake’ for town folk is now usually held in a more contemporary environment, for example, in a hotel or indeed in the dead person’s home. With all the family, neighbours and friends downing a pint or two (or three or four) or a gin and tonic, vodka, or whiskey, raising their glasses to give the oul lad — or wan [one] — a good send-off, in good old Irish tradition — and  the wake continues.

In the case of the death of a youth or a child, the wake is more somber, and distinctly lower-key – as it should be.