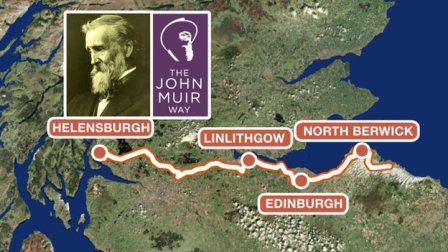 The John Muir Way – a 215 kilometre, coast-to-coast lowlands trail in Scotland – is scheduled to open today, marking both his birthday and the centenary of his death.

Explorer, naturalist, geologist, botanist, inventor, author – John Muir is better known in the United States than in his homeland of Scotland. In the former, Muir is celebrated as the “Father of the national parks. While there are parks, glaciers, mountains named in his honour in the United States – and even a planet in the solar system – with a few notable exceptions Muir hasn’t attained the same recognition in Scotland. However, that’s all about to change. As part of the Homecoming 2014 a major festival will be held honouring the man his biographer called one of the patron saints of twentieth-century American environmental activity.

“We feel he should be known and celebrated throughout the land of his birth, and that will begin this year when the First Minister of Scotland, Alex Salmond, officially opens a major new national pathway, the John Muir Way,” says Marion Mullholland, a spokesperson with Scottish Natural Heritage.

The route is scheduled to open on April 21, marking both Muir’s birthday and the centenary of his death. The 215 kilometre, coast-to-coast lowlands trail echoes Muir’s own personal journey growing up in Dunbar before he travelled to the west coast of Scotland to set sail for his remarkable life in America. The trail passes castles, historic towns and villages, beautiful coast scenery and Scotland’s first national park, Loch Lomond and Trossachs National Park.

“Despite the magnificent efforts of East Lothian Council (the region covering the town where Muir was born), the John Muir Trust and the John Muir Museum in Dunbar, Americans still tend to know more about him than Scots,” notes Keith Geddes, chair of the Central Scotland Green Network Partnership Board, which developed the concept of the route. “This is why the new route is a fitting way to celebrate a man who throughout his life, writings and legacy could inspire a new generation of Scots to recognize the value of nature and the outdoors.”

The trail goes directly through Scotland’s Central Belt, the most populated part of the country. According to Mullholland, the idea is to encourage Scots to appreciate the beautiful scenery they have right in their backyards, as well as to encourage visitors to celebrate Muir and the places he loved. “John Muir had an influence world-wide,” Mullholland says. “His environmental campaigning helped change the way people view nature and the Earth’s finite natural resources. ‘All that the sun shines on is beautiful, so long as it is wild,’ he wrote. That’s a philosophy that I think many people in Scotland share.”

Leading up to the trail’s opening is a spectacular festival paying tribute to the naturalist. The program of events includes the opening of the sculpture The Kelpies in Falkirk. The latter consists of two 30-metre high horse heads rising out of the landscape above the Forth and Clyde Canal and are monuments to equine history and the lost industries of the Falkirk area and Scotland, according to the artist, Andy Scott. The festival itself will open with a night-time, outdoor arts event over two nights in the new Helix Park near Falkirk.

The celebrations include a lot of original programming. Ramblers and runners will be invited to carry along the length of the trail Muir-themed flags that local school-children have designed. A gang of bearded Muir look-alikes are going to provide photo opportunities even as they offer thought-provoking quotes from Muir’s writing. A stylized tree will be raised at the launch and finale in tribute to Muir’s enduring love of giant sequoias. And an American and a Scot will walk the length of the John Muir Way, planting native seeds and reciting poetry along the way.

On the morning of April 26 the festival will reach the end of John Muir Way in Helensburgh on the same Clyde coast that 11-year-old Muir and his family sailed en route to their new life in America. The festival will culminate that evening in a street ceildh and firework finale at Loch Lomand National Park. “We’re hoping that people will be inspired to both explore and protect Scotland’s countryside,” Mullholland says. “John Muir was inspired by the wildlife and the beautiful scenery he grew up with as a young boy in Scotland, and we’re hoping plenty of other people – from both inside and outside of Scotland – will enjoy the trail and learn more about Muir’s beliefs.”