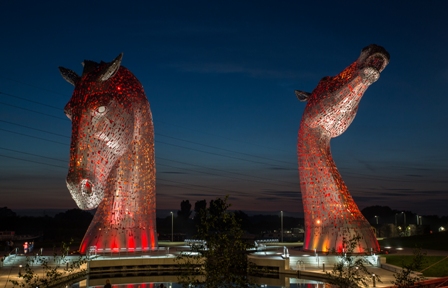 Powerful and majestic, The Kelpies is the magnificent centerpiece of a huge regeneration project at Falkirk, Scotland called The Helix.

The Kelpies’ name comes from the water-dwelling horse-spirits of ancient Scottish folklore. These massive, shimmering beasts – towering sculptures that artist Andy Scott created – are mirrored in the waters of the Forth and Clyde Canal, and serve as cultural icons, reflecting an oft-forgotten aspect of Scotland’s industrial past.

Glasgow-born Scott’s creation opened in the spring of this year. The two 10o-foot (roughly 30-metre tall) steel horse heads each weigh 300 tonnes and are clad in stainless steel plates. They stand as equine guardians on either side of the newly opened section of the Forth and Clyde Canal. They are the largest of their kind in the world and are already attracting international attention.

Bold and inspirational, they embody the spirit and aspirations of the Helix while remaining firmly anchored in the history of the land from which they spring.

Walking around the Kelpies, they seem alive. Looking up at their expressive faces against the blue sky, they appear to move. They are huge, yet approachable, engaging and captivating, just as those powerful draught horses of yesteryear must have been. I can sense their ancestors straining at big heavy ropes as they ploughed their way along the old Canal towpaths, their skin glistening in the sunlight as it reflects the ripples from the water surface. At night, looking into the black depths of the Canal, the colours change from gold through silver, to blue and red. Enchanting and hypnotic, I can’t help but wonder if a true pair of water-dwelling Kelpies is bewitching me.

The Kelpies is the largest piece of public art in Scotland and the largest equine sculpture in the world. It serves as a focal point within the wider Helix Park. Given its visibility from the nearby motorway and the low-lying nature of the surrounding land it also acts as a magnet for attracting visitors to the area.

Scott has produced public art in Scotland for many years. His designs are “influenced by the location, the social history, the geography and in many instances the aspirations of the local people.” In the case of The Kelpies, “The client had a vague concept of a massive civil engineering structure which was to act as a boat lift mechanism and they had a title. My brief was to re-interpret that start from my angle as a sculptor.”

As discussions progressed it was decided to separate the boat lifting element of the project from the artwork. The concept of the two horse’s heads, in strikingly different poses, first came to Scott when he was sketching at his future wife’s kitchen table in Amsterdam. It came from several considerations, “The vast open site of the Helix Park, the sight lines, the relationship to the distant Ochil Hills, the potential for illumination, the proximity to the M9 motorway and, of course, their function as an entrance gateway to the Forth and Clyde Canal. There was also my own attraction to the equine theme, and the idea of an artwork with two components, but not a symmetrical pair. The different poses create a dramatic tension and give rise to narrative interpretations.”

Once the basic concept was set, Scott advanced the design, resolving many of the sculptural issues in the second set of maquettes that was eventually scaled to full size. The foundations for each of the Kelpie heads is made of 1200 tonnes of steel-reinforced concrete. Each Kelpie’s main frame is constructed of tubular steel that in turn supports a secondary structure of steel brackets. These facilitate the fixing of the final 990 individually shaped stainless steel cladding pieces. This awe-inspiring work of art is in itself a significant work of engineering. The frames were delivered to site in sections and the entire installation was erected in 90 days at the Forth and Clyde Canal.

The Forth and Clyde Canal was conceived in the mid 18th century and completed in 1790. It provided a valuable inland east-west waterway link between the lowland industrial communities of the Firth of Forth and the Firth of Clyde, avoiding the previous route around the treacherous seas of the north of Scotland. The main way to transport materials the 35 miles (56 km) between these communities was via barges pulled by powerful draught horses such as Clydesdales, Shires and Percherons. This was the heyday of the industrial revolution and it was against this backdrop of industry and trade that the harbor town of Grangemouth came into existence at the Forth end of the Canal. Falkirk, just a few miles inland, prospered owing to its prime location at the junction of the Forth and Clyde Canal and the Union Canal that linked it with Edinburgh.

Throughout the 19th century a gradual increase in the size of sailing vessels rendered them unsuitable for the shallow, narrow waters of inland Canals. The advent of rail travel also took vital trade away from the waterways, as did the invention of motor vehicles and the construction of reliable road networks. The Forth and Clyde Canal slipped into disuse during the 1930s, officially closing in the 1960s.

Today, there is a renewed interest in leisure craft, sailing and houseboats. It partly comes from a desire to rediscover our lost landscapes and history and also from a renewed interest in nature, wildlife and sustainable living. In 2001 the Forth and Clyde Canal reopened as part of the Millennium Link, an £80-million project to re-engineer and revive both the Forth and Clyde Canal and the related Union Canal. The project is part of a wider initiative meant to regenerate communities and create economic, leisure and health benefits.

Following the Millennium Link project, and associated with it, came The Helix. It is one of Scotland’s most innovative parkland projects. With a grant of £25-million from the Big Lottery Fund and additional funding from other project sponsors, The Helix has a £43-million budget to create a cutting edge multi-purpose space linking 16 communities via 16.7 miles (27km) of pathways. Opened in 2013 The Helix boasts a 650 foot (roughly 200 metres) diameter lagoon, play areas, educational resources, community woodlands with associated nature and wildlife resources, cycle tracks, open space for hosting large events, a new extension to the Forth and Clyde Canal and the newly completed Kelpies.

Grant Mackenzie, Helix Team Leader for Falkirk Community Trust and responsible for managing The Helix and The Kelpies, says “We have created a brand new green space in Helix Park that has replaced a disused wasteland. One of our objectives is to help provide opportunities for the local population to be healthier. Our visitors are already walking, cycling and roller skating around their new park.”

With a new Kelpies visitor centre due to open in summer 2015, Mackenzie is already seeing the benefit of Scott’s Kelpies.

“Since The Kelpies opened in spring 2014 there have been significant numbers of visitors to the site and we have already beaten our budgeted figure of 500,000 and we are only in September. Visitors have really taken The Kelpies to their hearts and are awed by the sculptor’s design and vision for them. We have created a completely unique work of art that our visitors just can’t wait to see up close.”

Words and photos by Tom Langlands

For additional information about The Helix and The Kelpies see www.thehelix.co.uk