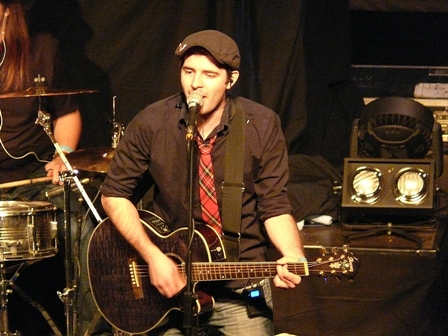 What is your own background/ethnic heritage?
We’re seven boys and one girl from Coburg in Upper Franconia. Though our home town is in the Free State of Bavaria, we’re Franconians with a different German accent and a different history. Coburg itself has a very special history within Bavaria but it’s in the heart of Franconia and our castle “Die Veste” is also known as the Franconian crown. We are Franconian and so we feel Franconia.

When and why did you start playing music?
Some of us played a musical instrument since we were children, but some of us started practicing as we made the decision to found that band. Most of the Celtic instruments in our performances came into our music in the course of our founding. But we practiced it with such an enthusiasm that we made up our own style very fast.

How long has the band been around?
The Kilkenny Knights as a band were found in 2009. But we played music together about one year ago before that time.

How has the group evolved since that time?
Our band that can be described as a group of friends evolved very fast. Related to our music we never marked time and improved our style and our songs. Every of our actual or former Knights (members) did his best to push the band. So even if there are some friends of us that won’t play in our band anymore, they also did their best to build up the Kilkenny Knights and we’re proud that we’re still in contact with everybody of them. “Once a Knight, forever a Knight!” 😉

Why the decision to start performing Celtic music?
We played Folk Music in different styles before the Kilkenny Knights were found. We tested many things before we made the decision to concentrate on the Celtic music, but that was a decision of interest. Even if nobody of us has his roots in Ireland or another “Celtic nation” every European is a Celt we think and so there was no problem for us to take a Genre that couldn’t be described as typical German. On the other hand we think that there are some German influences in our music, sometimes firstly, sometimes secondarily noticed, but that’s something we’re proud of. Nobody should hush up his roots!

How would you describe your sound today?
There are many descriptions for our music and we don’t really fight against that instance because it’s difficult to break out of a genre if you put yourself into a drawer that’s too tight. Once we said we play “German Irish Folk Rock” later it became “German Celtic Rock”. A part from that there’s a clear punk influence in our music so no description satisfies us. We and also some promoters and fans call our music “The Devil’s Dance Music” (German: “Des Teufels Tanzmusik”) and maybe that’s the best description of all!

Where do you typically perform?
This year there are many festivals we play. Some regional ones around our home town but also Shamrock Castle which is one of the biggest and most famous Celtic festivals in Germany. Apart from that our music fits perfectly in an Irish pub or something like that. There we sometimes play an acoustic set as well.

What is the response like from audiences?
If we wouldn’t get that great response we actually get maybe we wouldn’t go on with the ambitions we have. Last year there were so many amazing gigs that pushed us our personal height in these days. Not least the very good reactions and reviews in course of our album “Brady’s Pub Tales” we released a few weeks ago make us feel good in what we do. That’s great! J

What does the band have on tap for the rest of 2014?
There are some big gigs in the rest of 2014. Some of them with audiences bigger than anything we played before, so that’s what we look forward to the most. Apart from that we’re working on some new songs all the time and so we hope to write a few great pieces in the next weeks and months.

What’s the Celtic community like in your part of the world?
In some cases the Celtic community is correlated with other folk music based communities like the medieval, Nordic or Balkan ones. But in most cases Celtic music is something almost everybody likes even if it’s not his favorite genre. Apart from the music there are not that many links in our country because there isn’t the same historical background “usual” Celtic nations have or the same geographical circumstances. But there are many Germans, including us, who sympathize with the Celtic countries, their history and the way of life. Whiskey and Irish beer is very popular around us, but the German beer as well. 😉

Is enough being done to preserve and promote Celtic culture generally?
From our point of view there are many things being done to preserve the Celtic culture. No other culture has that many fans outside of their own countries. We’re not inside every aspect of being part of the Celtic culture but we like if we can see that people plead for the Celts’ achievements (language, traditions, music). On the other hand people of the Celtic nations have to be frank with people from other countries who like their culture and also help to preserve it for example by creating their own way of making Celtic Music or something like that. But as I said some lines before, the Celts were an European folk but in the time of globalization it has its descendants all over the world, be proud of it!

What can we be doing better?
Most important is that those things that actually work are saved for the future. Of course there are many more things that could be done but firstly we have to foster those people who help effectively to preserve and promote the Celtic culture. We have to give a platform for musicians, we have to share impressions of the Celtic way of life and we have to foster projects to protect the Celtic languages. That’s what we think is basic in that case!