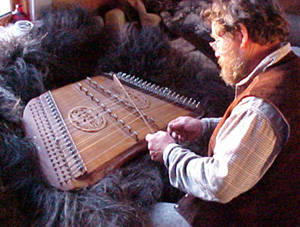 Tom Richardson’s musical career started with piano lessons and eventually evolved to the bagpipes. Today, the Vancouver, BC native is one of the world’s premier luthiers, specializing in custom-built dulcimers, harps and bodhrans. Recently he spoke with Celtic Life International about his passion and profession.

On his roots
I was made in Canada with Scottish parts, all my relatives are from Scotland. Even my wife was born in Scotland. At six years I started with piano lessons and moved to the bagpipes at eleven. For the remainder of my teenage years I was totally immersed in bagpipes. Every weekend there was a competition or event that I attended. While studying piobaireachd, I also took a little Gaelic and learned many songs as well.

On his vocation
While visiting a fellow music friend, he produced a box from under his bed and said “do you know what this is?” The box contained some kind of disassembled musical instrument that neither of us understood. My friend then asked me. “Do you think that you could you put it back together?” I was always a handy guy and an instrument fixer. Upon reassembly and repair it turned out to be a  small hammered dulcimer that had been brought to Victoria by the Chinese coal miners in the 1800s. It was so much fun putting it back together that I decided to copy it and play it as well. When I discovered that it was too small to play all the music that I wanted to play I built a bigger one, then a bigger one etc. During this time I found that other people wanted them and I started building custom dulcimers. It was a number of years later that there was a knock on my door and a gentleman and respected business man in our community said. “I have been asking all over town who can build me a harp? And many people have given me your name.” So, I began building and playing harps as well.

On his business
Custom built hammered dulcimers, harps and bodhrans. Repairing instruments of all types. Tuning and repairing pianos. Teaching music. When I first started working on hammered dulcimers I hadn’t really looked at them to see how they were built. So, instead of building the lopsided traditional dulcimer, I built instruments that were symmetrical. This made sense to me. These old instruments evolved and got larger and more complex without compromising the way they were played. And I had changed that in my instruments. Instead of playing do, re, mi, fa, on the right side of the bridge and so, la, ti, do, on the left with all the bass notes on the far right, I now play do, re, mi, fa, between two opposing bridges  and so, la, ti, do, on the outside with all the bass notes at the bottom to be played with either hand. Also now any three strings in a row on either side gives a chord. As well this  symmetry allowed for greater strength and stability. The greater strength allows me to use guitar strings in groups of three, and the sound resulting from that lets my dulcimers be heard loud and clear in a large session of musicians. Other differences in my dulcimers are that every string has a fine thumb screw tuner installed on it and there is an installed transducer pick up. Living on the west coast gives me access to the best sound board woods. All of my harps and dulcimers have sound boards made from Sitka Spruce or Old growth Red Cedar. The cedar that I am using had three feet of rot in the middle, the next four feet had over 1000 years of growth and the log was laying in the forest with a 500 year old fir tree growing over it. The tree was young when Jesus was born. I can honestly say that my instruments have the voice of the ancient rain forest. My harps have this sound board mounted on an almost parabolic shaped sound box and this makes for a great sound as well as appearance.

On the challenges
All of my instruments so far have been custom made and they are all different. This makes it challenging to constantly come up with new designs and art work. Forever improving and upgrading skills and techniques for inlay, carving, and finishing is a very rewarding challenge. Also it is a challenge to keep finding purchasers to build instruments for.

On the rewards
Aside from the three to eight thousand purchase price my greatest reward is when a customer comes to pick up their instrument. When they first see it their mouth drops and they say something like “O my god! It’s beautiful”. A professional harpist was playing a harp to be delivered to another customer. She played non-stop for 45 minutes then she looked at me with a huge smile on her face and said “Wow! How did you get such a beautiful big lute sound out of this harp?” These constant words of praise and encouragement are my biggest reward. Also I find free old pianos that need work. Repairing them and donating them to an old-folks home, or a young student that can’t afford one makes me feel good.

On his clientele
Ranging from children to old folks, my clients can be beginners or professional musicians. They all have one thing in common – the desire to own an instrument that is unique, beautiful and has a bit of themselves in it.

On his goals
My short term goal has always been to finish the instrument I am presently building with perfection. This year one of my goals was to take a newly finished harp to a local luthiers exhibition in October – I didn’t make it but I was able to bring enough instruments as well as some parts of my new harp to show. Over the next little while I plan on improving my advertising, web site, and networking. And eventually I want to retire from my carpentry work and build instruments full time.

On Celtic culture
In order to preserve and promote the Celtic culture we must teach and involve the children. We must bring them with us to these events and let them learn the songs and feel the pride of the Celtic people. All the pipe bands that play in Cumberland have children in them and they play in the pubs with the adults and experience the fun along with everyone else.