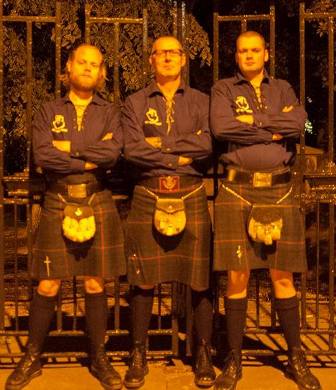 What is your own background/ethnic heritage?
I was born and bred in Dundee, Scotland. My mother, Frances and father, Ally both loved camping, and all our summer holidays and weekends from Easter to September, were spent on a caravan site in the beautiful and very musical village of Dunkeld. Where I saw Dougie McLean often performing

When and why did you start playing music?
My family was musical, my mother and father were both good singers, and my father played the mouthorgan, almost every day! My brother, Sandy, played guitar, piano, accordion and sang. I started playing drums when I was 16 after getting a set for Xmas. The 15 minutes practice session in my bedroom, playing along to The Clash, didn’t go down well with my dad, and the inevitable banging on the door and comments to stop making a racket, would be a regular occurrence.

How has the group evolved since that time?
We have evolved in the sense that the band has grown in confidence and our repertoire stretches to around 50 classic folk songs.

Why the decision to start performing Celtic music?
While we were jamming, playing old Ramones, Clash, Misfits songs we thought we would try the Wild Rover…but in a punk rock style. It stuck and just carried on, taking on the folk classics and McGonagalising them.

How would you describe your sound today?
Celtic Punk.

Celtic Punk / Celtc Rock seems to be more popular than ever – why is that?
Ever since The Pogues took folk music by the ears and gave it a good shake up, there have been bands keeping Celt Punk alive. The Mahones, Dropkick Murphys and The Real McKenzies all enjoy playing their own style. Folk music is at the heart of it and there is an enormous back catalogue of songs which people can relate to.

Where do you typically perform?
We usually play in bars, preferably with room to dance, but in June we played one the major rock venues in Amsterdam, The Melkweg. We were invited by our good friends The Mahones to play support.

What is the response like from audiences?
We get them dancing and singing along. Audience participation is part and parcel of a McGonagall gig, and we encourage the crowd to get on stage and sing or play along.

How goes the new recording?
The songs have been mixed all we need to do is put them on a CD and make the album cover.

How did you go about choosing which songs would make it onto the recording?
We picked our favourite songs for the album, songs we have played over the last few years.

When will it be released?
We plan to release it in Spring 2014.

What else does the band have on tap for 2014?
Gigs have been arranged for Burns Night, St. Patrick’s (weekend) and we have been booked for an Irish Pub Festival in Deventer NL. A return to Dundee is on the cards, and we would love to bring our music to Canada and the US.

Is enough being done to preserve and promote Celtic culture?
I think so. Celtic Life International is fantastic and can only help promote the Celtic culture worldwide. The amount of Celtic/ folk festivals seems to be growing each year, so there is an audience out there.