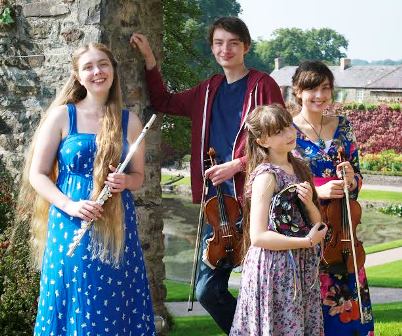 Pardon the pun, but these Meadows could become leaders in their field. But the Meadows in question aren’t a long stretch of grass, but rather four, young classically trained musicians from Wales. The three sisters and brother regularly perform together and cover a wide range of genres, including classical, Celtic, Tudor and contemporary music. The siblings began playing seriously together roughly four years ago.

“It seemed to form so naturally as there has always been music playing in our noisy household,” shares their father, James Meadows, in an interview with Celtic Life International.

He says as the children grew up they became increasingly involved with music and simply couldn’t get enough of it.

“If they weren’t playing music, they were listening to albums by Clannard and other musicians who have helped inspire them on their musical journey,” he notes.

While the quartet plays in a variety of styles, they gravitated toward Celtic music because they enjoy experimenting.

“There has been a strong leaning towards Celtic music in the family as there is so much variety of colour, expression and room for improvisation that is so much fun in traditional music,” Meadows explains. “We just love coming up with fresh arrangements of traditional music for our concerts.”

The more the quartet plays together, the greater the confidence they gain.

“I remember the first performance we did together,” Fantasia recalls. “We were all pretty terrified, although we enjoyed it. Now confidence has grown. We feel more excited than scared before a concert. To connect with an audience and see them enjoying themselves only gives us more enthusiasm and we love every moment.”

The quartet has written several of their own pieces. One, which Fantasia authored, is titled An Evening Stroll Through Aberglasney, which drew inspiration from the gardens of the same name in Carmarthenshire, Wales. The piece incorporates piano, flute and violin and fuses together Celtic and classical music. Another original is a Celtic-styled song titled May Mountains How, which Tatiana composed.

According to Meadows, the quartet requires a lot of hard work both individually and as a group.

“As they play quite a variety of different instruments, it takes many hours to practice each day,” he points out. “It feels so worthwhile the effort when they come together and learn new music, so they can just bounce off of each other. They have also done some recording, which has sharpened them, and look forward to doing more in the future.”

Asked what makes a good song, Melody replies that it is one the performer not only has a connection with, but that touches the listener’s emotions and imagination.

“It’s fantastic to play and sing something that creates a certain atmosphere, whether it be an emotional song or something lively and humourous, which the audience can join in on as well.”

Meadows asserts that just keeping up with Celtic music traditions is a great way to preserve the culture and keep it alive.

“It can touch people from all ages and backgrounds and it is good to see a new generation being energized by Celtic music, which is worth building upon. We would like to see more events to bring emerging bands to the public attention as Celtic music is not just something that harkens back to the past, but is as current and relevant as ever.”