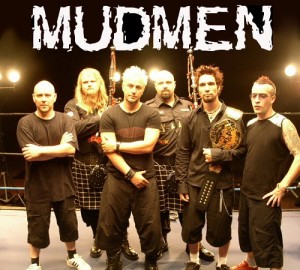 Always entertaining and definitely unique, The Mudmen are a blast of Celtic energy whose members are known to be characters both on and off stage. The band, formed in 1998 by Sandy and Rob Campbell (a.k.a. “The Campbell Brothers”), might be best known for their singles “5 O’clock”, “Saturday”, and “Drink and Fight”, their music has been featured on Xbox and Playstation games, NBC’s television show “Black Donnellys”, WWE Wrestling, Don Cherry’s hockey videos and six music videos on Much Music. The band has appeared on CBC television many times including multiple live performances on Parliament Hill for Canada Day festivities (including performing for and meeting the Queen in 2010), The McKenzie Brothers special, the recording of the new Hockey Night in Canada theme song, and much more. Celtic Life International had the pleasure of speaking with co-founder Robby Campbell about the band and about their appearance tonight at the Antigonish Highland Games.

What brought the band together?
My brother Sandy and I created the band to promote and showcase the bagpipes and Celtic music.

Are they the same reasons that you continue to do it today?
Yes we are on a mission to prove the bagpipes belong in a touring band and should get the respect they so much rarely receive.

How did you get involved with the Anitgonish Highland Games?
We have been getting more Celtic with every cd and were contacted by festival to entertain this summer.

What can audiences expect at a Mudmen show?
Audiences can expect a fun family friendly show with the odd drinking song.

What is the response like at a concert?
The response at our shows is amazing the banjo and mandolin sets the tone when the pipes aren’t playing. We are a ceilidh party band that likes to have fun.

Is enough being done to preserve & promote Celtic culture?
No I think we need more festivals, radio programs to promote Celtic music. There are so many great Celtic bands/performers that don’t have the marketing machine behind them so it’s important that these Celtic festivals get the grants, and sponsorships to keep the culture alive.

What can we be doing better?
I think if the bigger bands mention small bands, promote Celtic music on podcasts and mention that their performing a Celtic song the people will listen and respect Celtic music more. Hell, there have been so many great legends like Bob Dylan (who is learning the bagpipes!) that have recorded – Sam Hall, Mick Jagger with Wild Colonel Boy – this music has proven itself time and time again

What’s next on the band’s agenda?
We have enough material for 2 cds and were thinking about signing again with a major record label. We have been recording video for a DVD that’s been in the works for some time and we have a company interested in a reality TV show.