THE NEW WORLD OF HARRIS TWEED 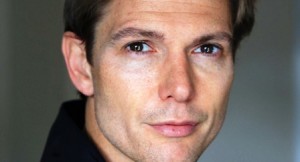 How does a traditional Scottish industry on the verge of extinction suddenly find its fabric the darling of 21st century design and fashion? Look no further than Harris Tweed Hebrides and its creative director Mark Hogarth.

Outside, dark clouds churn, winds howl and the cold waters of the North Atlantic lash the coast lying just beyond an adjacent field. Mark Hogarth looks up from his phone and nods. “Japan” he mouths silently. Minutes later he’s on his feet, hand extended. “Welcome to Harris Tweed Hebrides.” He glances through a window. “Aye, weather here is rather unpredictable.”

Hogarth, 38, is creative director for Harris Tweed Hebrides, a firm using the traditional talents of 130 self-employed at-home weavers to provide the raw fabric with which it commands 90 per cent of the world’s Harris Tweed market. Glasgow-based, Hogarth visits company headquarters every six weeks, heading 300-plus miles north to the windswept Isle of Lewis, where there is little but green fields, bleating sheep, a few houses and the Great Beyond. Go west and the next stop is Newfoundland.

Launched in 2007, Harris Tweed Hebrides doesn’t actually make finished products, only the fabric, which is purchased by major designers and fashion houses around the world. In the hands of clever designers that wool takes on the warm glow of desirability, commanding eye-watering prices. Even exclusive Italian fashion house Ermenegildo Zegna uses the firm’s famous fabric. Notes Hogarth: “Zegna is first and foremost a fabric maker, so it’s a very significant compliment to get interest from these kings of the fabric and design industry in Italy.”

“As creative director I am the link between the mill and the consumer, articulating and communicating the value of Harris Tweed,” Hogarth asserts.  Surprisingly, he studied politics and communication, not fashion or design – though a stint as a model led to his current position.

“When working in Japan I was in the fashion industry, so I was on the fitting and pattern cutting floors of all the top designers,” Hogarth elaborates.

“I learned about the textile industry and I understand the process. Though I’m not a qualified designer, I do have a good eye. But I’m in the demand side of the business, so ultimately I need to understand the zeitgeist,” he notes, referring to the mood of the moment. “Then we can tailor the creative process to fit, even proactively change that zeitgeist to allow ourselves to be aligned with a movement.”

Hogarth is both an artist in creative marketing sense and a salesman.

“Yes,” he concedes. “I’m selling the value of the process while marketing the legend of the brand. The challenge is to confound stereotypes that see Harris Tweed as a jacket or a pattern. It’s neither. Harris Tweed is a fabric, an industry, a worldwide brand. Tokyo is a big market. Italy and southern Germany are growing. France, Korea, Canada…. We may sell to French, Italian or American companies, but they have worldwide markets, so the product does get around.”

“Yes, so we’ve had to do a much better job of telling the story. The audience for Harris Tweed in the ‘70s was mainly gents buying jackets. Now young girls buy tweed handbags, so our audience is changing. Potentially it is anyone with an appreciation of the quality, provenance and heritage of the Harris Tweed brand. There is no specific demographic.”

Hogarth undersells his role in the success of Harris Tweed Hebrides and the resurgence of the industry as a whole. But isn’t he the only creative director actively branding Scotland’s legendary fabric to the world? And attending fashion shows including Pitti Uomo in Florence and Première Vision in Paris?

“My expertise is in monitoring the market, assessing trends and making sure fashionistas and journalists get the right story. Though we’ve become something of a name check for all things heritage and provenance, I think we’ve also put a spotlight on other Scottish textile companies who use traditional artisanal methods. There are great products made all over Scotland,” Hogarth modestly concludes. Story by Wayne Blanchard