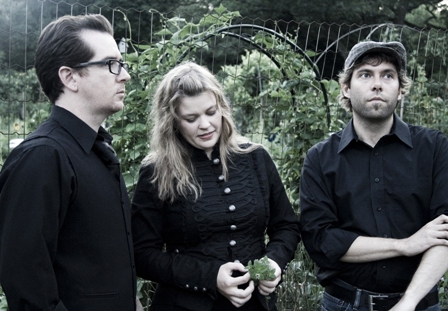 George Street in St. John’s, Newfoundland can get a little rowdy on a Saturday night. In fact, the two-block walk by the provincial capital’s waterfront – which boasts more pubs per square foot in Canada – is raucous most evenings, as locals and those “from away” stagger from one bar to the next checking out the live entertainment.

“It’s a great spot to play or grab a pint,” shares Andrew Dale, multi-instrumentalist with St. John’s trio The Once. “You never know who’s going to show up, or who’s going to sit in on a session. On any given night you can hear folk, roots, rock, blues, jazz, country, cabaret, classical or Celtic music – sometimes all on the same stage!”

Those influences, and more, were present on the band’s 2009 eponymous debut recording, on which the group covered Leonard Cohen and Tom Waits, and for which they received numerous nominations and two Canadian Folk Music Awards; Traditional Album of the Year and New/Emerging Artist of the Year.

That diversity was again at play for 2011’s Row Upon Row of People They Know, which included a cover of the Queen classic You’re My Best Friend, and which was nominated for a prestigious Juno Award.

“We tried to bring all of those elements into the new recording as well,” notes Dale, referring to the trio’s latest effort Departures. “And so we chose songs that challenged us to stretch out as players and performers – songs that we could leave our own stamp upon.”

The new album’s title signifies more than just musical growth; Dale and his creative cohorts – vocalist Geraldine Hollett and fellow multi-instrumentalist Phil Cunningham -signed with Nettwerk Music Group out of Vancouver this past June, and are now on the road in support of label-mates Passenger.

“I think we are on tour for something like the next six months,” laughs Dale, counting off dates in Canada, the U.S., Belgium, Germany, Italy, France, Spain, Australia, New Zealand and more. “It’s pretty exciting actually; a lot of these places we have never played before.”

Once those dates are done, the band plans to go out on their own in support of Departures.

“By that time people will know us a bit better. That’s one of the benefits of opening shows for an artist like Mike (Rosenberg of Passenger); we will be seen by people who might have not heard of us otherwise.”

He and his band-mates expect a warm welcome from those audiences.

“If it is anything like the response we have received to the new album, then we aren’t worried at all. There is something universal about folk music – something that strikes a chord with listeners everywhere. It’s real music – honest and heartfelt. The same can be said for Celtic music; the more traditional tunes we perform always go over very well.”

And while the band may be far from home over the coming while, home is always as close as their fingertips.

“Is it that obvious that we’re from St. John’s?” Dale chuckles, with a slight brogue common to most Newfoundlanders. “Ah, I guess that’s what you get for hanging out on George Street.”