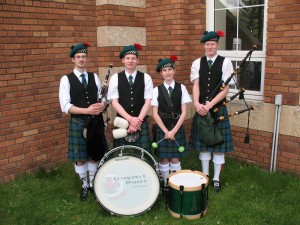 Family weddings often bore kids, but a wild wedding ceilidh inspired the Stewart brothers to connect with their Scottish roots. Now, years after their musical journey began, the award-winning Canadian siblings can throw their own ceilidhs.

It was the year 2000 when Winnipeg-based Dave Stewart received an invitation to the wedding of his cousin, Fiona, whom he’d last seen when she was just 11 years old and played the pipes at his own wedding to his wife, Denise.

Dave had been intrigued to see his young cousin play the pipes. His parents had immigrated to Canada from Britain in 1967 and they’d raised him to be North American, but his uncle had passed on Scottish ways.

“My parents became quite Canadian, dropping most things Scottish or English for things like country music and Canadian beer in order to fight being homesick,” Dave explains.

“My dad’s brother also immigrated to Canada, staying in Winnipeg a few years, then marrying and moving to Saskatchewan. My uncle kept close to his roots by introducing Scottish culture to his daughter.”

Later, when Fiona told Dave she wanted her family to attend her wedding to fellow piper Mike Francis, Dave and Denise traveled to Saskatchewan with their three sons and new-born daughter.

“The outdoor wedding included groom and groomsmen in full highland dress,” Dave recalls. “It was terrific, but the ceilidh that followed was a blast, with many guests belting out tunes on pipes and drums into the wee hours. Fiona was even playing her pipes in her formal white gown. Our two oldest boys, Ryan and Evan, were gobsmacked by the spectacle and wanted to learn how to play the pipes.”

So back home, Dave and Denise enrolled their boys as chanter students with the Transcona and District Pipe Band. Under the instruction of the late Pipe Major George Lawrence, the boys progressed to grade four, winning many awards and medals along the way.

Now 23, Ryan is the Pipe Major of the Transcona and District Pipe Band and competes as a grade one player. He also plays with the City of Regina Pipe Band. This summer, he travels to Scotland with CRPB to compete at The Worlds.

Evan 21, is Transcona’s Pipe Sergeant and a grade two piper. He’s been asked to play with Winnipeg’s Erin Street Pipe Band and compete at the Pleasanton Games in California this month.

Bryden, 17, received many accolades for drumming and took over as bass drummer for the Transcona band in 2008. He is now an instructor. The youngest, Aislyne, 12, is thrilled to be playing tenor in the Transcona band alongside her brothers.

Over the years, Dave and Denise have filled many roles on Transcona’s band executive. They consider the time well spent.

“We’re proud of our mini band when they practice together around the kitchen table,” Dave says with a smile. “Bryden also plays the bodhran while Ryan plays the penny whistle and has a set of small pipes. Sometimes, we have our own ceilidh!”

The music has brought them closer to each other and their culture.

“This includes my father who, after many years, has come back to his roots,”Dave says. “He has a renewed interest in Scottish history and listens to all types of Scottish music which he loves to share.”