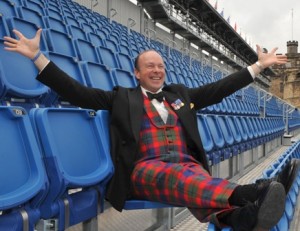 As chief executive and producer of the Royal Edinburgh Military Tattoo, Brigadier David Allfrey’s greatest pleasure is seeing someone in the audience completely connecting with the show.

“The tattoo has the ability to touch the audience in a very remarkable way,” Allfrey said. “The sound of the pipes is extraordinary and when the bands get it absolutely right, it is not far short of magic.”

Allfrey retired from the regular army in 2011 to produce the tattoo, but he has had notable success producing other civil/military spectaculars since 1987. He has now produced two sold-out tattoos and is getting ready for his third.

“The tattoo has been an important part of my life for many years,” he said. “One of my abiding memories is my own son at aged seven standing on his seat, swinging his kilt to the sound of the massed pipes and drums. The place, the people, the music, lights, sounds, fireworks and the atmosphere are unique.”

The tattoo performs to 8,800 people each evening from across the world. “For many visitors, an evening at the tattoo is the culmination of a visit to the United Kingdom and the highlight,” Allfrey said. “While for others, it’s one component of a wonderful trip to Scotland, taking in a range of destinations, absorbing the majestic countryside, the heritage, the food, drink and the entertainment and hospitality for which Scotland is famous.”

The tattoo is also important to the United Kingdom’s economy, contributing ￡77 million and a further ￡31 million in the equivalent of full-time employment. “Running any business in the current economic climate is challenging,” Allfrey said. “We need to attend carefully to our bottom line and we must be responsive and customer-focused in all that we do. The toughest piece is invariably setting the budget and sticking to it. Because we draw acts from a wide international sphere, it’s always a challenge to scout our acts and deliver them safely to the show. Come what may, the Royal Edinburgh Military Tattoo – along with the rest of Scotland – can offer a warm and traditional welcome!”