The Return of the White-Tailed Eagles 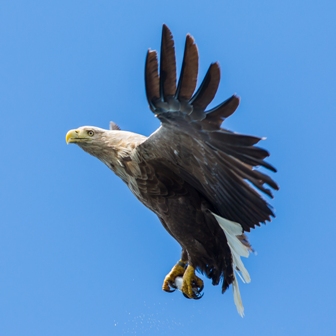 The 18th century fishing port of Tobermory, on the Inner Hebridean island of Mull, has provided a safe haven for storm-tossed boats and welcomed many travellers over the years. Its brightly coloured buildings sparkle in the blue waters of the bay. Go no further and you would leave Mull with pleasant memories. Explore the natural wonders of this island beyond Tobermory and you will experience something magical.

With an area of 338 square miles (875 square kilometres) and a coastline of 300 miles (483 kilometres) Mull is the second largest island of the Inner Hebrides off the west coast of Scotland. In the early 1800s Mull’s population numbered around 10,500 but the ensuing Potato Famine and Clearances forced many to leave. Now it is home to fewer than 3,000 people. Fishing, farming and forestry once formed the main industries and although they still exist, it is now tourism that drives Mull’s economy. Many of today’s visitors come to see the island’s wildlife, but few appreciate what makes this place so unique.

Mull has large areas of native deciduous woodland with ancient trees, ferns and lichens. These are Celtic rainforests dominated by sessile oak and hazel. Mountain streams cascade over waterfalls before winding on through moss-covered boulders and fern-laden banks. Colourful fungi sprout from decaying branches on the forest floor and the air is thick with the scent of warm, damp foliage. This is home to an astonishing range of mosses, liverworts and lichens along with rare fungi, such as hazel gloves, that thrive in the damp, unpolluted air that the Gulf Stream warms.

John Clare moved to Mull seven years ago, having holidayed there for 30 years. He ran a wildlife consultancy for more than 20 years and has written management plans for some of the most important nature conservation sites in the UK. He is the author of several books about Mull’s wildlife and is currently Community Information and Tourism Officer for the Royal Society for the Protection of Birds (RSPB).

Clare understands what is special about this place. “Mull has a very varied geology and landscape and a long maritime coastline. Thus, a wide range of wildlife habitats exist. The climate is mild and wet, much of the land has been untouched by herbicides and pesticides, and large areas are uninhabited and difficult to access, which all enhances the diversity and abundance of wildlife species. Mull’s uniqueness is this diversity and abundance.”

A trip around Mull’s coastline reveals sea otters, seals, porpoises, dolphins, whales and basking sharks. Seabirds and ducks forage along the foreshore, while birds such as crossbills can be spotted feeding on the cones high in the pine forests. In autumn, the roaring of red deer stags and the clashing of antlers announce the arrival of the rutting season. This “monarch of the glen” has attracted visitors to Scotland for many years but it is Mull’s eagles that bring the new generation of wildlife tourists. Mull hosts one of the largest concentrations of golden eagles to be found anywhere. Search above the ridgelines of the island’s mountainous interior and you may see this iconic Scottish bird soaring high. For the greater part of the last century the golden eagle has enjoyed the status of being Britain’s largest bird. Now, it has forfeited that place to a newcomer. 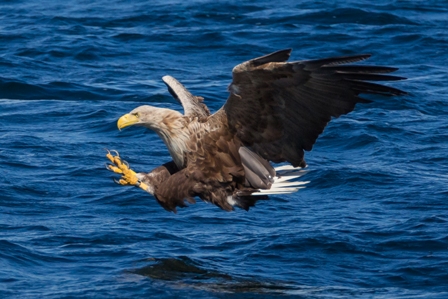 With a staggering six-and-a-half to eight-foot (roughly two-metres) wingspan, the white-tailed eagle has returned to take its place as the UK’s largest bird. Nicknamed the “flying barn door,” these birds are easy recognizable. Mull’s rugged coastline provides the ideal environment that this sea eagle favours. Often perched on a tree or rocky promontory overlooking the sea, it can launch itself and, with a few beats of its massive wings, ride the thermal currents searching for fish in the waters below.

One, just above the waves, partially folds its wings and starts a rapid but graceful descent. Brown feathers flutter and white tail feathers fan out against the blue sky. Drawing closer, the size and strength of this predator is evident. Penetrating yellow eyes are fixed on the water. A huge hooked flesh-tearing beak points the way while stocky legs are raised forward with ominous curving talons protruding from large yellow feet. Speeding over the water, it drops those mighty claws into the sea and with a few powerful wing beats heads back to its cliff-top nest with a doomed fish. The nest comprises a huge pile of sticks in which the female will lay a single brood of two eggs between March and July.

Several hundred years ago the sight of a white-tailed eagle around the UK coastline would not have been uncommon. Sadly, habitat change and persecution resulted in their extinction with the last known native bird being shot in Shetland in 1918. Unsuccessful efforts were made in the late 1950s to reintroduce the birds to Scotland and it wasn’t until 1975 when 82 young birds from Norway were released on the nearby isle of Rum that the re-introduction program became properly established. Later re-introductions have taken place in Wester Ross, Fife in east Scotland and also Ireland. None has been re-introduced to Mull and yet the island now has around 20 established white-tailed eagle territories.

Clare explains, “Juvenile birds roam far and wide, usually for the first four or five years in search of a mate. They then establish a territory and remain there for the rest of their lives, often into their 30s. The first two pairs of the re-introduced birds to set up territories did so on Mull in the early 1980s and the first wild-fledged chick was on Mull in 1985. The reason the white-tailed eagle chose Mull was probably because of the diversity of habitats and abundance of prey species. Of particular importance was the richness of sea fish and seabirds around the Mull coastline.”

The re-introduction program has had its critics, mainly crofters and farmers. Although these birds predominantly feed on offal around the coast, an eagle will occasionally take a small lamb. In most cases the lamb will already have been dead or dying. Clare is aware of the prejudices that exist. “We have had one of the Mull juveniles poisoned on the Scottish mainland. One of the first three chicks to fledge in Ireland in 2013 was shot and one of the nest trees was chopped down on an estate on the east coast of Scotland last winter.” Despite the critics, 85 per cent of visitors list the birds as a significant factor in visiting Mull and it is estimated that the eagles generate £5 million annually towards the island’s economy.

Martin Keivers operates Mull Charters, a local business established on the back of the eagles’ arrival. Liaising closely with the RSPB and Scottish Natural Heritage, Keivers bought a boat and started running trips to take visitors along the coastline to see the eagles and other wildlife. At other times he arranges fishing trips. “We are now in our sixth season. I employ my son Alex as full-time crew and my wife to do bookings and paperwork. Alex already has some Royal Yachting Association qualifications and wants to be a skipper one day. We also run a B&B that benefits from return visitors to Mull who want to go on the boat trips again and we already have bookings for 2015!”

Keivers is very much aware of the wider value to the community. “The partnership between the RSPB, Scottish Natural Heritage, Forestry Commission and Mull and Iona Community Trust results in large amounts of the money generated going directly back into the community to support various clubs and causes. They support many youth projects demonstrating how valuable an asset the wildlife, especially the eagles, is to a small community like ours.”

In a world where wildlife and the natural environment seem constantly under threat it is wonderful and encouraging to see the white-tailed eagle back in the skies over Scotland. It is slowly, but surely, strengthening its hold and expanding its kingdom.