The Riding of the Marches 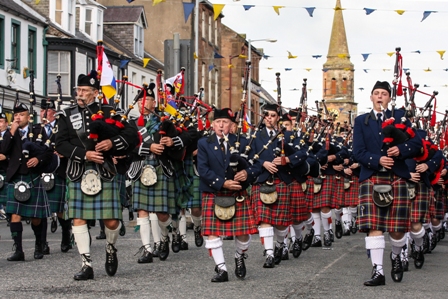 Obliviously asleep, I am suddenly aware of the surreal sound of a bugle from the street below.  Bizarrely, the clattering of horses’ hooves on the roadway accompany it, as well as someone shouting loudly that it is time to get up. Early morning light permeates the bedroom curtains and through my blurred vision my bedside clock tells me it is 6.30a.m. I momentarily curse this inconsiderate intrusion into my dreams before fact consumes fiction and I remember that today is Annan’s annual Riding of the Marches. The bugle wakens the townsfolk and on this day the town awakens its history.

Annan, with a population of around 10,000, lies close to the mouth of its namesake river, the gently flowing waters of which conceal a very turbulent past. To the English border it is only 10 miles, with the ‘auld enemy’s’ shoreline even closer across the estuarial waters of the Solway Firth. Although its location has given it trading advantages over the centuries, it has also put Annan at the forefront of many conflicts. Since local tribes first attempted to fend off Roman invaders this area has had to fight hard for its freedom. The invasions of English forces have razed Annan to the ground on several occasions and when not at the forefront of Scottish/English conflicts it has had to endure centuries of murderous raids by the infamous border reivers inhabiting the lawless Debatable Lands. Rousing the townsfolk to protect their homes and livestock was a necessary part of yesteryear, but today it is a fun occasion with historic overtones.

The earliest recorded ceremonial Riding of the Marches in Annan was in 1871, but for the next 75 years it was held infrequently, only taking place to coincide with special events such as the Queen’s coronation or the cobbling of the High Street. It wasn’t until 1947 that the first of the modern day annual events took place.

Annan’s Riding of the Marches is held on the first Saturday in July and although the tradition of riding the ancient marches is what defines the contemporary event, it is only one part of what has expanded into a major gala for the area. Various forms of entertainment punctuate the day. These include a procession of decorated floats representing many of Annan’s key businesses and organisations, which a local girl crowned as Queen of the Border leads through the town centre. A fun fair and an arena with a variety of displays running throughout the afternoon keeps all ages entertained and reinforces the community spirit.

The scale of this celebration necessitates plenty of planning and Thompson knows only too well the level of hard work involved. “Planning for next year’s event starts immediately after the previous one finishes and it now takes up 12 months of the year. The selection process for the principal characters takes place in the early part of the year and by spring the Cornet, his Lass, the Standard Bearer and the Queen of the Border will have been chosen.” In the weeks before the main event they visit local schools and participate in numerous community events raising awareness of the traditions behind the gala day and further reinforcing the community spirit.

Although other border towns have similar events each celebrates its own unique traditions in different ways. Annan’s event is one of the largest and Thompson is well aware of the social and economic benefits associated with it. “It is one of Annan’s busiest trading days of the year.  Riding of the Marches draws visitors from across Scotland and other parts of the UK as well as international visitors from places such as Canada, USA and Japan. Many return again and again combining their trip with visits to family and friends in the area.”

After Reveille, the principal characters of the day, namely the Coronet and the Cornet’s Lass, accompanied by their entourage of Standard Bearer, previous principals, guests, marshals and riders from the wider area, gather on horseback at the east end of the town’s High Street. It is a colourful and noisy spectacle. The red jackets of the Cornet and his Lass set them apart from the other black-clad riders. Around 100 to 140 horses and riders bedecked with rosettes, ribbons and sashes in the Burgh colours of blue and gold gather, and the immaculately groomed horses snort and toss their heads in eager anticipation.

As the bugle-wakened crowd cheers them on, they make their way past the ancient Fish Cross and along the historic High Street, pausing at the market square near Annan’s baronial Town Hall. Here the Standard Bearer is entrusted with the Burgh Standard. To the age-old cry of “Safe Oot, Safe In” and with much cheering and whooping, and no small amount of civic pride, men, women and children of all ages gallop off to ride the ancient boundaries, or “marches,” and lands of Annan.

In more distant times and out of necessity the townsfolk would head out in similar fashion to intercept raiders, confront an approaching army or simply to check on outlying areas and inspect the integrity of the walls, ditches and fences of the Burgh marches. It is a tradition dating back over 600 years and historically would have been potentially dangerous with occasional skirmishes or worse.

Today, only stops to feed and water the horses and riders and for such ceremonial moments such as the Hole in the Hedge will interrupt the cavalcade’s progress. This tradition takes place at a hedgerow standing upon land Willie Crone’s smithy once occupied. Legend has it that in olden times a young boy was pushed through the window of the smithy under instruction of keeping lookout for raiders. Today, this tradition is marked with a local boy shoved through a hole in the hedge and given a “skelp” on the backside to help him on his way. In another nod to the past, snuff is passed around in in an antique silver snuffbox gifted to the town in 1807 by one of the Burgh’s famous residents, General Dirom.

The route taken each year is broadly similar, but with variations taking account of the tides along the Solway shore. It is both impressive and emotional to watch over 100 horses charging across the sands behind the Burgh Standard to circle the Altar Stane lying in a channel of the Solway Firth and marking the most southerly point of the burgh boundaries.

Having ridden the marches, the cavalcade returns for the annual chase held on open parkland by the river. Here, the riders participate in high speed gallops reminiscent of the way in which their ancestors once gave chase to would-be marauders.

Setting Annan’s Riding of the Marches apart from other similar events is the return of the Burgh Standard in the evening and the Cornet’s assurance to the townsfolk that all is in order, for this marks the onset of the grand finale: a spectacular colour and sound extravaganza involving around 20 pipe bands from all over Scotland and the north of England. It is one of the country’s largest marching mass pipe band events.

With the Victorian sandstone buildings of the High Street resonating to the skirling of the pipes and the beat of the drums and the sun gently setting behind the spire of the old Town Hall, I make my way to one of Annan’s historic coaching hostelries for a few celebratory drams. Then I wind my way home after a wonderful event-packed day, comforted in the knowledge that the town’s marches are intact, I can sleep safely and that the sound of a bugle won’t awaken me at dawn for another year.

Words and Photos by Tom Langlands, a resident of Annan
www.tomlanglandsphotography.com