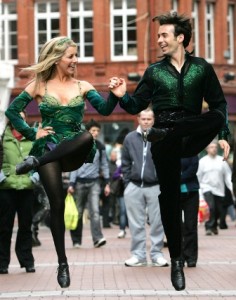 Padraic Moyles is home, and he couldn’t be more pleased.

“We have just returned from a four-month Riverdance tour in China,” he explains over the phone from Dublin, where he and his wife Naimh have recently taken up full-time residence. “The shows and the reception were absolutely brilliant, but it is always exhausting.”

As the longtime Principle Dancer for the smash Irish spectacle, and now the show’s Associate Director, Moyles has been criss-crossing the planet since 1997.

“You take the breaks when you can get them,” sighs the thirty-something. “There is something about coming home to Ireland, to Dublin, that just feels so warm and welcoming. It feels like I can stop, put my feet up awhile, and just breathe.”

Though he has lived away from Ireland for years, Moyles – like many Irish – is keenly familiar with his roots.

Moyles continued to study Irish dancing in the Big Apple, under the tutorship of the legendary Donny Golden. By the age of twelve he had turned pro, eventually leaving home to pursue his passion permanently six years later.

“And, essentially, the road has been my home since that time,” he says, noting short stints on Broadway and elsewhere, along with his regular Riverdance gig.

Over that time, Moyles performed with the likes of Maria Carey, Cher, Shania Twain, and the Chieftains. He has also appeared on numerous television programs, including Dancing With The Stars, The Ellen Degeneres Show, and Good Morning America. As well, he has showcased for several political leaders, including US Secretary of State Hilary Clinton.

Amidst all the running around, he still found the time to study sports psychology, and, along with Naimh – whom he met and courted on the set of Riverdance – started up an Irish dancing school in Manhattan.

“To be honest, it has all been a bit of a whirlwind,” he admits. “I am not sure where the time has gone, but I am happy to be sitting still for a spell here.”

However, with Riverdance scheduled for shows in Germany and Japan through the spring, Moyles won’t be resting on his laurels for too long.

“Ha, true,” he chuckles. “However, we will be home in Ireland for shows in Cork and Dublin this summer, so that will make life a little easier on both Naimh and I.”

This fall will see the production doing double duty in both Canada and the USA.

“Both shows will be out on the road in North America for almost a full year,” notes Moyles. “That’s familiar ground for us, and we always get a tremendous reception when we tour there.

“Lots of Irish expats, yes,” he continues, “but there are always lots of non-Irish in attendance as well. Irish at heart, we’ll call them. Along with U2, Riverdance is perhaps the most recognizable cultural export from Ireland. Ask anyone what they think of first when you mention Ireland and we are always at, or near, the top of that list.”

Moyles adds that, aside from the satisfaction of a job well done, meeting fans brings him the greatest rewards while on tour.

“The feedback is always welcome. I believe that all of the cast members, from the dancers to the management to the tech crew, love seeing people smile or hearing how the show has touched them in some way.”

He is particularly enthused by the response from younger people.

“A lot of the kids are inspired to take up Irish dancing, or some other style of dance, which is a fantastic way for them to immerse themselves in something active and healthy. Some of them remind me of myself at that age, actually, and who knows – they may very well end up performing in Riverdance themselves one day.

“Which will be good for me,” he laughs, “because by then I will likely be ready to put my feet up for more than just a few weeks.”