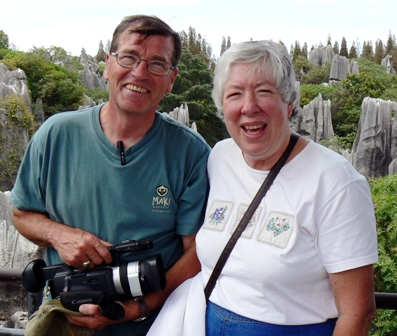 Canadian travelers Gary and Cherrill Smith divide much of their time between their native country and their Florida home. The rest of the year, however, they are exploring the world.

What are your own roots?
We both trace out roots back to England, Scotland, and Ireland. Cherrill’s paternal ancestors emigrated from Stirling, Scotland, to the United Sates before moving on to the Eastern Townships of Quebec in the 1800s. Some of Gary’s ancestors came from Scotland in 1832 and founded the family farm near Merlin, Ontario.

What have been some favourite trips together?
This is a difficult question to answer (and one we get all the time) because we have been to more than 60 countries. Our stock answer is “the last country we visited”; however,  some of our favourites are Iceland, Ireland, South Africa, Botswana, Namibia, Sri Lanka, and Uganda. From this list it is obvious that southern Africa is at the top of our destination list.

Do you prefer guided tours or working with your own agenda?
Before we started travelling together, we organized our own itineraries and travelled independently. Since 1995 we have gone on 25 group trips organized by Craig Travel. In the past few years we have used our independent travel skills and knowledge to assist Craig Travel with designing some of their new itineraries. As we get older we have found that it is very enjoyable to travel with a group of compatible, like-minded people. We also appreciate that the cost is all-inclusive (visas, gratuities, transfers, most meals, etc.), the accommodation is the best available, and the group is escorted by a well-travelled leader and experienced local guides. We have also organized two trips (Ireland and Italy) for a group of six friends and then had Craig Travel make the final arrangements (flights, hotel bookings, transportation, guides, etc.) with their in-country provider. These trips were half-way between independent and group travel experiences because they were well-organized with a driver/guide and mostly prepaid, but flexible enough to allow for spontaneity.

Have you been to Ireland, Scotland or Wales?
We have both travelled independently to Scotland; Cherrill in 1963 and 1980 and Gary in 1978 where he spent two weeks exploring the Outer Hebrides and a week on the mainland. As noted above we organized a trip to Ireland in 2001 for ourselves and two other couples.

If so, what were those experiences like?
In Scotland, Cherrill enjoyed the Military Tattoo and the Festival in Edinburgh and walking the bleak hill country. Gary was intrigued by the sense of stepping back in time in the Outer Hebrides, smelling the peat fires, and hearing Gaelic spoken. In Ireland, we discovered a country that is magical with mysticism, wonderful people, music, delicious food, and fabulous accommodation in farmhouses, small country house hotels, and castles.

Will you revisit those countries?
We would love to go back to Ireland and Scotland to explore parts of these countries that we did not get to before, but recently we have been visiting destinations that are more off the beaten path . However, given our roots, Scotland and Ireland keep tugging at our heart strings.

Where are you two travelling to next?
In 2015 we are going to the southern state of Karnataka in India. This will be our fourth visit to this overwhelming but fascinating country of 1.2 billion people. Later in the year we will be going on a riverboat cruise from Amsterdam to Budapest. Compared to India this will be a leisurely, relaxing trip.

Do you have any advice for younger travellers?
Go anywhere that you have a yearning to explore; downtown Boston can be as interesting as the rainforests of Borneo. Be sure to engage with the local people, try local food, and learn about local cultures and values. Do the physically challenging trips first and be sure to visit India at least once.