The Road to Referendum 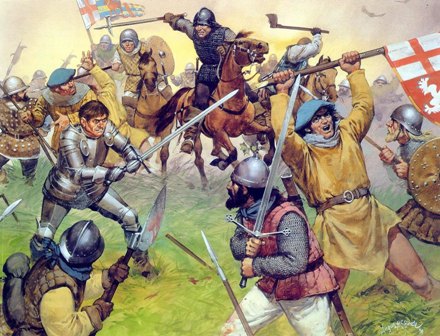 Those who are voting “yes” in the referendum on September 18 are not the first to push for Scotland’s independence from England, or from other empires and invaders for that matter.

Although during the Battle of Mons Graupius, the Roman army killed some 10,000 Caledonians, they never managed to dominate the people and land in what is now Scotland. In fact, they built Hadrian’s wall to protect Roman Britain from the mighty, determined Picts of Caledonia.

What is now Scotland also contended with Viking raids—which ultimately united the Picts and Scoti—and for a short stint, William the Conqueror. But during King Alexander III’s reign (1249-1286), Scotland enjoyed a prosperous, and relatively peaceful time.

When Alexander was suddenly thrown from his horse and killed, King Edward I of England seized his opportunity for conquest, setting in motion more than 700 years of conflicts, truces and union between England and Scotland.

1286 – : When King Alexander III of Scotland died, his only heir was his granddaughter Margaret, a mere toddler, living in Norway. In 1290, en route to Scotland, Margaret became ill and died. The Guardians of Scotland named Edward I, known to be a successful king, arbitrator to decide who would take the Scottish throne. Among the 13 or more claimants, Edward named John Balliol to be King of the Scots in 1292, but he expected his choice to literally abide by his oath of fealty. King John succumbed to Edward’s pressures for a time until he signed the Auld Alliance with France in 1295.

1296 -1328: Scotland aligning with France infuriated King Edward. In 1296, England invaded Scotland, dethroning King John, to begin the First War of Independence. The Scots retaliated under the leadership of William Wallace and Andrew Moray, defeating the English during the Battle of Stirling Bridge. Wallace was captured and executed in 1305, but Robert the Bruce became the King of Scots in 1306 once rival John Comyn was out of the way.  He led the Scots to victory at the famous Battle of Bannockburn in 1314. In 1328, King Edward III and Robert the Bruce signed the Treaty of Edinburgh-Northampton, establishing Scotland’s independence.

1332-1357: Upon the support of England, Edward Balliol invaded Scotland and initiated the Battle of Dupplin Moor. This began the 25-year Second War of Independence—a failed attempt of Balliol to overthrow King David II, the son of Robert the Bruce, from Scotland’s throne. The war ended with the Treaty of Berwick.

1513: Scotland, under the rule of James IV, invaded England in the Battle of Flodden Field as part of their renewed Auld Alliance with France. James IV was killed during the battle and the Scots were defeated.

1603: James VI, King of the Scots, inherited the thrones of England and Ireland, known as the Union of the Crowns.

1707: The United Kingdom of Great Britain was created under The Treaty of the Union to politically join England (and Wales) with Scotland. Robert Burns wrote, “We are bought and sold for English gold,” describing the Scottish parliamentary members who were bribed into signing.

1715 & 1746 (also 1689): The start dates of the main Jacobite risings where supporters from Scotland, as well as Ireland and northern England, attempted to restore the British throne to the House of Stuart (Stewart), which was founded by Robert II of Scotland.

18th & 19th Centuries: During the Highland Clearances, many Scots were forced from their homes and thousands crossed the Atlantic to settle in North America. It was a time where the British parliament attempted to wipe out Highland culture with legislation such as the Act of Proscription (1746) which included the Dress Act, making it illegal to wear traditional tartans and kilts.

1853: The National Association for the Vindication of Scottish Rights was founded, spearheading Scotland’s home rule movement.

1975: Production of North Sea oil began at the Argyll field. During the ‘70s, the SNP initiated the “It’s Scotland’s Oil” campaign.

1979: A referendum was held on the question of devolution and the establishment of a Scottish assembly. Despite the result of 51.6 per cent “yes” votes, it did not meet the proportional electorate requirement.

1997: A majority of Scots voted in favour of a Scottish parliament with tax-varying authority in the 1997 devolution referendum.

1999: Elections for the first Scottish Parliament since 1707 took place. The Labour Party won 56 seats while the SNP won 35.

2007: The SNP, led by Alex Salmond, won the Scottish parliamentary election. The SNP formed a minority government with Salmond as First Minister of Scotland.

2011: In the 2011 parliamentary election, the SNP won by a landslide forming Scotland’s first majority government since the parliament was re-established.

2013: The Scottish Parliament passed the Referendum Bill on November 14th and it received royal assent on December 17th.

2014: On September 18, voters will answer “yes” or “no” to the question “Should Scotland be an independent country?” As of July 29, approximately 100,000 16 and 17-year-olds have already registered to take part in the referendum, according to Macleans magazine’s Katie Engelhart. The Poll of Polls dated August 7, 2014, from John Curtice’s What Scotland Thinks, reveals an average of 57 per cent against and 43 per cent for Scottish independence.