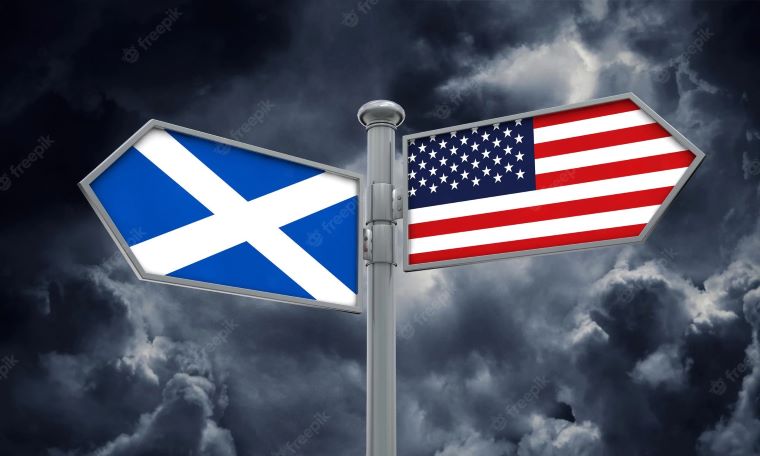 Of the fifty-six members of the Continental Congress of 1776 who signed the Declaration of Independence, James Wilson of Pennsylvania and John Witherspoon of New Jersey were natives of Scotland. William Hooper of North Carolina, George Ross of Delaware, Thomas Nelson, Jr., of Virginia, and Philip Livingston of New York were of Scottish descent. Matthew Thornton of New Hampshire and James Smith and George Taylor of Pennsylvania were natives of Ulster; and Thomas McKean of Pennsylvania and Edward Rutledge of South Carolina were of Ulster-Scottish descent. John Hart of Hunterdon County, N. J., and Abraham Clark of Elizabeth, N. J., both from their names and the fact that both were from centers of Scottish settlement, were doubtless of Scots descent. Robert R. Livingston of New York and John Houston of Georgia, both of Scots descent, were active members of the Congress, but were absent on duty when the engrossed copy was signed (August 2, 1772) and their names do not appear.

Dr. John Witherspoon, one of the leaders in the movement for independence and one of the signers of the Declaration of Independence, was born in the parish of Yester, February 5, 1722. He studied at the University of Edinburgh, and at the age of twenty-one was licensed to preach. He shortly afterwards became minister of Beith in Ayrshire and held that charge for twelve years. He then accepted a call to Paisley and remained there until 1768. His position in Scotland was a prominent one and Aberdeen University marked its appreciation of his scholarship by conferring on him the degree of D.D. in 1764. His essays and sermons were reviewed in the leading magazines of London and Edinburgh as often as they appeared, and a number of them were translated into Dutch. 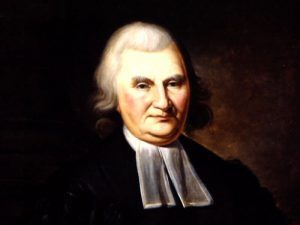 In 1766 he received a unanimous invitation from the trustees of the College of New Jersey to become its president. At first he was unwilling to accept, but found it his duty to do so when the call was repeated, and arrived in America with his family in August, 1768. When the Continental Congress met at Philadelphia in September 1774, he represented his county at the New Jersey convention for the election of delegates to that Congress. In 1776 he was elected to the New Jersey Provincial Congress, where he played a prominent part not only in unseating British rule in the colony, but also in the deposition of William Franklin, New Jersey’s last royal governor. His energetic action in these matters caused him to be elected one of the five representatives of New Jersey in the senior body (June 1776), with definite instructions to vote for independence and the declaration of that independence. To a member of the Continental Congress who said that the colonies were not yet ripe for a declaration of independence Wither-spoon replied, “In my judgment, sir, we are not only ripe, but rotting.” He held his seat in Congress through 1782, with the exception of the year 1780. In addition, he served on three important committees, the Committee on Clothing for the troops, the Board of War and the Committee on Secret Correspondence.

While holding his seat in Congress he did not neglect his college and did not fail to attend every meeting of the Board of Trustees and presided at every Commencement, and indeed all his time spared from public service was devoted to his classes. On the reconstruction of the Presbyterian Church in America after the war the task fell to him to direct the framing of the new order. As the most prominent Presbyterian in the young Republic, he was chosen to preach the opening sermon at the meeting of the first Assembly (May, 1789), and to preside as the first Moderator. His latter years it is regrettable to add were clouded by financial embarrassment, by ill health, and for more than two years before his death by blindness. The end came suddenly to him, November 15, 1794, in the seventy-third year of his age. He lies buried in the Presidents’ Lot in the Princeton Cemetery.

Hon. Thomas McKean (1734-1817) was born of Scottish parents in Chester County, Pennsylvania, and was admitted to the bar when he was twenty-one years of age. He was for seventeen years a member of the General Assembly; a member of the Stamp Act Congress of 1765; the only member of the Continental Congress who served continuously from 1774 to 1783, and president in 1781; and from 1777-1779 Chief Justice of Pennsylvania. He was elected Governor of Pennsylvania in 1799 and twice re-elected, serving until 1808.

George Ross was born in Newcastle, Delaware, in 1730, son of Rev. George Ross, a former Presbyterian minister of Scotland who had entered the Church of England and came to America in 1703 as rector of the church in Newcastle. The son received the best education the colonies afforded, was a lawyer and statesman of superior ability, an upright judge, of singular sweetness and modesty of character, and had been the King’s prosecutor and a member of the General Assembly of Pennsylvania previous to the war. 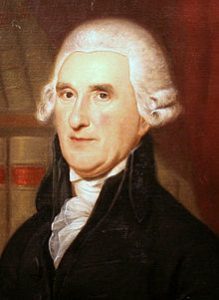 He was a valued member of the Continental Congress from 1774-1777, when compelled to retire on account of ill-health. He served on nearly all the important committees, including that with General Washington and Robert Morris appointed to devise a national flag. To Elizabeth Griscom, “Betsy Ross,” the wife of John Ross, nephew of George Ross and son of Rev. Aeneas Ross, the making of the first flag was entrusted. George Ross died July 14, 1779, in Philadelphia.

Dr. Matthew Thornton was born in Ulster about 1714. He was brought to this country by his father when only about three years of age, the family settling first in Wicasset, Me., and afterward in Worcester, Mass. Dr. Thornton was a noted physician and Revolutionary patriot, and afterward was Chief Justice of Common Pleas of New Hampshire and a member of Congress. He died in 1803.

Edward Rutledge (1749-1800) was a brother of John Rutledge and the youngest son of the Ulster-Scot, Dr. John Rutledge, who came to South Carolina in 1735. He was educated in law at the Temple, London, and was a member of the Continental Congress 1774-1777. He served on many important committees, and with Benjamin Franklin and John Adams conferred with Lord Howe at the Billopp House on Staten Island, September 1776, the only conference for the purpose of arranging peace during the war.

The meeting was without result, but Lord Howe afterward wrote in the highest terms of the personality and intellectual eminence of the commission. After the war, he held many high offices. Another brother, Hugh Rutledge (1741-1811), also attained prominence as a jurist in his native State, South Carolina.