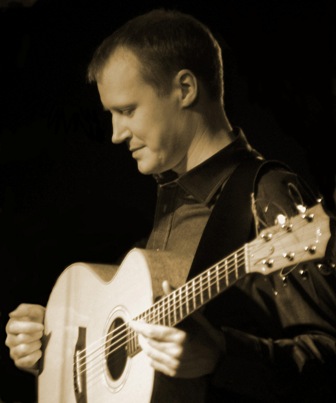 Jim Malcolm is the ultimate Scots troubadour. Travelling the world with his guitar, harmonicas, and engaging wit, he sings the traditional songs of Scotland and his own masterfully crafted songs. Recently he spoke with Celtic Life International.

What is your own background/ethnic heritage?
My parents are both Scottish, I’m Scottish, and I’ve lived my whole life in Scotland. My dad is not particularly interested in his Scottish cultural heritage, but my mum always has been, and was a keen goer to folk clubs in the Sixties during the folk revival. So there was folk music in the house when I was growing up, but it didn’t catch my interest until I was in my late teens.

When and why did you start playing music?
That question has a rather funny answer. My mum paid for a block of ten guitar lessons, but after two she didn’t want to go any more and sent me in her place. I took to the guitar…I really liked it. We started off with classical guitar, but my interest took off stratospherically when my teacher brought in music from the Beatles and I realised I could play it all. My nickname for a while was “Change McCord” because I stopped every time I had to change chord. But I got past that. In my teens I played in noisy heavy metal bands with my school pals. Because I lived on a farm with outbuildings, practises were always at my house, and we terrorized the neighborhood with the racket we made. We were chicken farmers, and those birds were pretty scared. I am sure we were pretty awful, but we were having a great time. Music has been a huge part of my life every since those guitar lessons started. There are many other directions my life could have taken, but music grabbed me, and when I found I could make a living out of performing, I never really considered doing anything else.

Are they the same reasons you do it today?
After 30 years as a professional musician I do feel differently about music from my first years starting out. It’s my job; my family depends on me to keep making music, touring and recording. But it certainly has never been ‘just a job’. There is hardly a day when I don’t play my guitar for at least an hour, and I don’t feel right if I don’t make music for a few days. I suppose it’s a form of expression for me. So I can’t say the reasons are quite the same, but the underlying buzz from creating music has never gone away.

How have you evolved as an artist over that time?
It takes everyone some time to find their voice, and it wasn’t until my mid twenties that I really got to grips with playing the harmonica. I had a sore hand at the time from playing too much guitar, and I needed still to be making music, so I picked up a harmonica and played that thing so much I kept getting into trouble. The police pulled me over once for driving erratically, and wouldn’t believe me when I said it was because I was driving with one hand while I held the harmonica in the other. Now I play a lot of simultaneous guitar and harmonica. I’ve also found the material I like to perform…traditional songs that lend themselves to harmonica and guitar harmonica, guitar in DADGAD tuning which works really well with the old tunes. You never really stop evolving as an artist. You refine what you do and distill what you love.
Why the decision to start performing Celtic music?
I grew up with Scottish song but rejected it as a teenager, when pop music was where it was at. Then I was at a session (an informal gathering of musicians playing together in a pub) when a singer called Jim Reid sang a song about a place just down the road from where we were all sitting. It had a profound effect on me, to hear a song with place-names I’d driven past on my way there. It just seemed to much more meaningful and real than singing thrashy, generic songs from other places. I started writing and singing songs from my own culture, and I’m still doing that now.

How would you describe your sound today?
Well, other people use the word ‘soothing’ to describe my voice. They call my guitar playing ‘expressive’. The harmonica playing is usually called ‘subtle’ or ‘sweet’. I like to have harmonies. I love old Scots songs, but I also love humor. And I do like to play a good-going strumming song too, the kind that wakes you up and stirs the Scottish blood in you.

Is your creative process more ‘inspirational’ or ‘perspirational’?
Some songs come easily and fast; others are sweated over. I have in the past woken up with a new song fully formed, just needing to be written down. Others have taken several weeks or even years to complete. There are no rules in songwriting.

What makes a good song?
Well, it’s enough for a song just to entertain or provoke any one of a range of emotions. But for me a good song also captures an era or has something to teach you (of course you learn without even noticiing) or in some way enriches your day. The melody binds with the words to make something lasting.

What do you have on tap for 2015?
This year I have two big tours in the USA and I’ll also be leading two musical holiday tours around Scotland. I’m also helping my 17-year-old daughter record a CD of her own songs (like me at her age, she’s interested in contemporary music). I’m hoping to spend a lot of time at the riverbank too – fishing is my other great enthusiasm.
I’m quite political, though I don’t shout about it that much, and there’s a general election in the UK in May. I’ll spend a lot of time until then reading up about the choices involved, and the shenanigans people get up to when there’s an election looming.

Is enough being done to preserve and promote Celtic culture generally?
That’s an interesting question because Celtic culture is in fairly good heart at the moment, if you simply look at how many young musicians there are out there who are talented and dedicated to the music. But if they try to make a living from music then the problems begin because there isn’t a big enough audience out there to support them. Great work has been done at Edinburgh University to preserve our culture, and future generations are going to thank them for that. But audience building is the key now.

What can we be doing better?
I’ve thought for some time that more emphasis should be put on helping people who want to promote Celtic music, rather than encouraging more and more people to perform. For example, in Scotland our folk clubs could be supported to help them provide good sound systems and to help them with the rent of good venues for their clubs. At present the emphasis seems to be on helping support musicians. But if the work is there, the musicians will come! It wouldn’t even cost very much because the folk clubs can almost manage without help, but with some financial support they could concentrate on building their audiences instead of just trying to stay afloat. That’s my tip!