THE SPIRIT OF THE SEASON 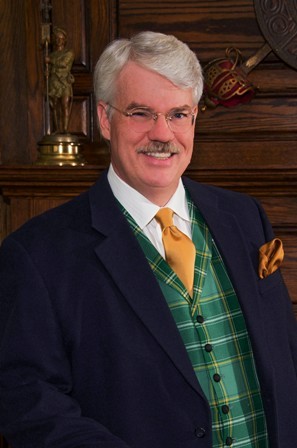 It takes a team to put together this weekend’s The Pipes of Christmas concerts in New York City and New Jersey. But it is the tireless efforts of one individual, Bob Currie, which brings it all together.

I understand you and the Clan Currie Society started hosting Pipes of Christmas in 1999, and it came out of your collaboration with Pipe Major Kevin Blandford and the Clan’s Kirking of the Tartans Services. What are your memories of both Blandford and those Kirking services early on?
The Clan Currie Society had been producing a very popular Kirking of the Tartans service for several years starting in 1995. About the same time, I discovered PM Kevin Blandford’s beautiful CDs entitled, “The Pipes of Christmas” and “Amazing Grace,” I immediately signed Blandford to bring his exceptional piping and arranging skills to our Kirking services. I’ve been to many kirking services over the years and just loved the reverence, pageantry and music of the program. That said, those programs left me wanting more from a performance perspective. Over time, Blandford and I pondered what a live concert version of his Christmas CD might look and sound like. Building on that CD, we moved away from the annual Kirking service and debuted the re-imagined “live” “Pipes of Christmas” concert.

Your first year, 800 attended to a 700-seat hall! When did you start offering additional shows (including NYC) and has the audience been growing year after year?
That first year was an incredible thrill ride! Up until the day of the concert we had only sold about 200 tickets which would have left me squarely in the red! I still can’t really explain how it happened but an additional 600 or so showed up at the door. It was an (albeit minor) Christmas miracle. Once we filled all the pews we put people in the choir loft, once that filled we started moving in folding chairs. It was wonderful. We started expanding the concert schedule the following year. Not satisfied with our incredible NJ success, Blandford and I often wondered if the concert was “ready” for NYC. We got our answer in 2006 when we opened the concert in NYC.

For someone who has never attended the Pipes of Christmas, what would you like them to know?
I think the famous Scottish actor Brian Cox (who has attended the concert in NYC) said it best, “It’s very dignified.” I couldn’t have asked for a better review. I’ve seen loads of Scottish and Celtic shows both live and on television and they’ve all left me a little flat. They frequently fall victim to adding such trite elements as bad kilt jokes or references to hunting haggis and the like. Some people like this material but it always made me cringe a bit. I wanted my audience to experience what one guest described as “the best Christmas Eve in Scotland he could have ever imagined.” We celebrate Christmas – the birth of Jesus. There’s no dancing snowmen or men in red suits. You can find that anywhere. We wanted to honor the spirit and meaning of Christmas as our ancestors did. And this includes the singing of Gaelic hymns as well.

For you personally, what aspects of the production are most meaningful or momentous?
There are many. There’s that moment of anticipation just before we launch into a very majestic rendition of “Highland Cathedral.” The piece builds so beautifully from solo piper to pipes and organ and then the full pipe band supported by organ and brass – it’ electric. I enjoy experiencing the wide musical dynamics of the concert – we perform a beautiful “O Come, O Come Emanuel” on fiddle and uilleann pipes which is just haunting and send them home with a sonically powerful “O Come All Ye Faithful.” The most meaningful moment of all is Luke’s Gospel reading of the first Christmas told in old Scots dialect. We then transition beautifully into “Silent Night” performed first in Gaelic and then in English as a congregational hymn. The emotion and spirit of that moment is incredible and has to be experienced in person. I’ve also been very pleased with our abilitity to offer new music composed by some very fine up and coming Scottish composers. We began this tradition back in 2001 when PM Blandford composed a haunting lament to commemorate the 9/11 terror attacks. Since that time, our concerts have been known for hosting world premieres of great new music.

This year there is a tribute to Buddy MacMaster I hear. Can you elaborate?
What is here to say really? Buddy MacMaster is one of the grandfather’s of Cape Breton fiddling and his music has inspired generations of musicians to take up the fiddle and perform in that classic style heard across Nova Scotia (and now around the world) at barn dances, kitchen ceilidhs and concert halls. The MacMaster family has been very generous to send us the tune list of music played at Buddy’s memorial service and we want, strike that, need to add our tribute to this great musician and human being. I’m really looking forward to this moment in the concert.

What else would you like to share about this year?
In addition to the tribute to Buddy MacMaster, we’ll be observing the hundredth anniversary of the famous “Christmas Truce of 1914” where Scottish, French and German soldiers left their trenches and joined together across “No Man’s Land” to observe Christmas. Perhaps we can all learn something from this often overlooked Christmas “miracle” of the first World War. We are also thrilled to be hosting the winner of the Alexander McCall Smith Prize for Composition which we coordinate with our generous sponsors from Edinburgh Napier University. If last year’s selection is an indication of the quality of music we can expect from ENU students this year, we’ll be in for a great treat. We also will debut (in NJ only) a new pipe march we commissioned with one of the greats in the US piping world, Duncan Bell. “The Garden State March” has been written to commemorate the 350th anniversary of the founding of the State of New Jersey. We’re making efforts to have it adopted as the official pipe march of the State!

The Pipes of Christmas is more than just a show. Tell us about your scholarship and community outreach programs.
Christmas is a time of giving and in that spirit, we are fortunate to be able to use concert proceeds to bestow a number of annual music and history scholarships at many leading institutions including the Gaelic College in Nova Scotia, the Royal Conservatoire of Scotland and the National Piping Centre, both in Glasgow, Sabhal Mòr Ostaig on the Isle of Skye and Lyon College in Arkansas. We’ll also be announcing a new music scholarship at the concert this year! In addition to scholarships, concert proceeds help support a growing number of special events and programs such as the Struileag Gaelic poetry initiative, the Royal National Mod and the US National Scottish Harp Championship. In addition, we also donate tickets to local charities so they can be used in their own fundraising efforts. To date we’ve supported over 20 deserving non-profits in this manner like the American Red Cross and the Children’s Aid Society of New York. Just last year, we started a new “Pipes of Christmas” tradition by conducting a food drive at the concert. Through the incredible generosity of our audience, we collected over 300 pounds of non-perishable food that we brought to the Community Foodbank of New Jersey.

For you, is there something particularly special about Scottish Christmas traditions?
I think it’s pretty safe to say that the “Pipes of Christmas” is my Christmas. The music, the readings and the abundance of good cheer I have the privilege of experiencing these last 16 years has been wonderful. There may be one Christmas tradition we’ve helped encourage along the way but certainly didn’t invent was actually an Irish custom. Included in our narration is a mention of an old Irish tradition of placing a lut candle in the window on Christmas Eve. The candle is meant to help light the way for the Christ Child as he walks among us.