The Spirits of Islay

The remote Scottish island of Islay is rich in natural beauty and home to some of the world’s most favored whiskys. Read more here;

Islay’s isolated location has helped give the Scottish island its charm — and produce some of the most prized whiskys in the world. There’s plenty here for tourists — from bird-watching and seal spotting to hiking and playing golf — but the real draw is the eight distilleries. Scotch is central to the identity of this island of just 3,500 residents. Islay is the southernmost island of the Inner Hebrides, an archipelago off the west coast of mainland Scotland, and sits just 20 miles from Ireland. And many can tell that a whisky came from Islay just by smelling the glass. In the 1800s, while other parts of Scotland switched to coal to dry the malted barley that’s the foundation of Scotch, Islay stuck with peat, the decaying organic matter found in bogs. Using peat creates a distinct smoky flavor. “If your first whisky is an Islay whisky, you may think you have been poisoned,” says Iain McCallum, master of malts for Bowmore, a distillery on the island. To lure tourists, Islay distillers now offer immersive experiences that will interest even the novice Scotch drinker.

Here are four distilleries that show the wide range of Islay whiskys, from the traditional drams at Bowmore to the experimental offerings of Bruichladdich. Each offers interactive options that let guests cut their own peat or plant their country’s flag on Scottish soil.

Start your tour in the Southern part of Islay at Laphroaig distillery (laphroaig.com), which turns out the most famous of Islay’s single-malt Scotches. But be warned, Laphroaig is a polarizing spirit. A recent advertising campaign called “Opinions Welcome” shows people trying the spirit and describing the unusual flavors it invokes, including iodine, bandages, smoked fish and damp dog. But fans of the whisky are so passionate about it that there’s a “Friends of Laphroaig” club that designates for its members a square foot of land on the distillery’s property after they buy a bottle. When they visit the distillery, they get to collect their “rent” — a dram of Scotch. Members also get to plant a flag from their home country on their tiny plot of land. Additional tour experiences range from about $9 to $130. The most expensive, the Water to Whisky experience, shows every part of the process, and visitors get to stoke the peat fire, turn barley as it’s drying, and bottle their own whisky straight from the barrel using a valinch — a long metal tube — to take home. 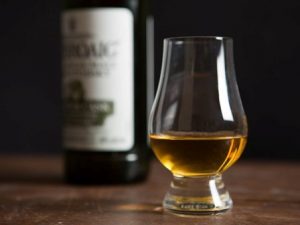 Ardbeg distillery is about a five-minute drive from Laphroaig along the main road of A846. Before the current interest in single-malt whiskeys, times were tougher for Scotch makers. This distillery, which opened in 1815, ceased production twice in the 1980s and ’90s. It was later bought by Glenmorangie, a single-malt whisky made in the Scottish Highlands, and then acquired by French spirits giant Moet Hennessy Louis Vuitton. The now-pristine facility is referred to by locals as the Louis Vuitton of the distilleries, and it is making award-winning single malts to match. The distillery is now testing the effects of gravity — or the lack of it — on how whisky ages. Vials of Ardbeg with charred oak chips were sent into orbit for almost three years aboard the International Space Station, while identical vials were kept in a warehouse in Islay. The samples returned to Earth this past fall, and are now being tested at a lab in Houston. Different tour and tasting options are available here depending on how many drams visitors want to try. From April through October, when weather is permitting, the distillery offers three-hour “Bog Off” walks on Mondays and Fridays. Visitors walk to Ardbeg’s water source, Loch Uigeadail, as well as to peat bogs, where they can cut your own peat (wear sturdy shoes or boots). The walk includes lunch and drams, and a short tour of the distillery (about $53 at current exchange rates). The Old Kiln Cafe at the distillery is a popular lunch option, and oyster lovers should try some paired with Ardbeg 10 Year. The briny quality of the whisky makes it the perfect accompaniment. After all those drams, it might be a good idea to stay on property. The recently refurbished and swanky Seaview Cottage can sleep up to six people in three bedrooms (about $335 per night, $2,283 per week).

Both Ardbeg and Laphroaig are in the small town of Port Ellen, which offers a few more sites. A 10-minute drive along A846 from Ardbeg, curving north around the east side of Islay, will take you to Kildalton Chapel. In the yard here, you’ll find the only surviving Celtic High Cross in Scotland (the others are all in Ireland). The eighth-century cross has biblical scenes on one side and animals carved into the stone on the other. From Port Ellen, you can also set out on expeditions from the water. Islay Sea Safari (islayseasafari.co.uk) offers a variety of day trips, including bird-watching, a trip to nearby Jura island (which also produces Scotch), and the Corryvreckan Whirlpool, the third-largest whirlpool in the world. Tides and topography combine to create other visible whirlpools as well as standing waves.

From Port Ellen, head to the other main town on the island, Bowmore. On the way, stop at the Islay Woollen Mill Co. (islaywoollenmill.co.uk), which made the tweeds for the Mel Gibson film “Braveheart” (1995). The facility has two Victorian-era looms, and sells a variety of scarfs, blankets, hats and more. Then pop in the Kilarrow Parish Church (theroundchurch.org.uk), which looks down on the town of Bowmore. It’s known as the Round Church because the circular structure, built in 1767, was designed to have no corners for the devil to hide in. Right in the town of Bowmore is Islay’s oldest distillery (bowmore.com/visit-us), which bears the village’s name. The distillery now operates with an eco-friendly system that uses heat produced during distilling to warm the visitor center, as well as an indoor pool at a recreation facility near the distillery called the Mactaggart Leisure Centre (mactaggartleisurecentre.co.uk). Anyone can pay to use the center — a good option for a rainy day. The distillery itself is open for a variety tours and tasting sessions that start at about $9 per person.

Across Loch Indall from Bowmore is the village of Bruichladdich and its eponymous distillery, which was shuttered for seven years before backers with experience in the wine industry revived it. It now makes a variety of creative Scotches in sleek, colorful packaging. The wine influence is apparent in the way Bruichladdich makes its whisky: There’s an emphasis on terroir — which refers to the influences that the characteristics of a location, like geography, climate and soil, have on the taste of products made there. Bruichladdich convinced Islay farmers to start growing local barley again. It even makes whiskys that use barley sourced from a single farm, like the Islay Barley Rockside Farm 2007 ($59.99). The wine influence also can be found in the way the whisky is aged. Most Scotches are aged in former American bourbon or Spanish sherry barrels, but whisky at Bruichladdich also spends time in former red wine barrels, lending unique flavors and colors to the blend. Unlike most Islay Scotch, Bruichladdich isn’t a peated whisky, but the distillery also makes a Port Charlotte line of “heavily peated” whisky and an experimental Octomore range of “super-heavily peated” single malts. And if you need a break from Scotch, the distillery makes Botanist, a gin.

Getting there: If you’re flying into Glasgow, Scotland’s largest city, direct 40-minute flights to Islay operate one or two times a day, depending on day of the week and season, on Flybe airlines (flybe.com). Also, CalMac (calmac.co.uk) runs several daily two-hour ferry rides to Islay from Kennacraig, a town in Western Scotland, that carry both passengers and cars. And CityLink (citylink.co.uk) operates a bus that runs from Glasgow to Kennacraig. If you’re bringing a car to Islay, be sure to book a spot on the ferry ahead of time.

Stay: The Bridgend Hotel (bridgend-hotel.com) is literally situated at a bridge’s end near Bowmore in Islay. Guests staying here have access to fishing on the banks of the hotel. The Harbour Inn (harbour-inn.com) in Bowmore has a well-respected fish and game restaurant on the property.