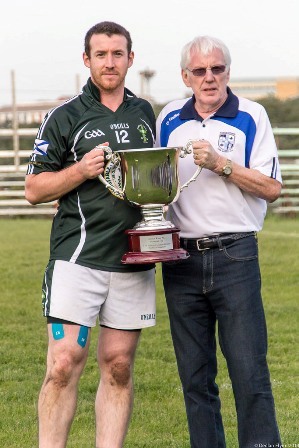 Day three of the Halifax Celtic Festival leaves it all on the field with exhibition matches of gaelic football, hurling, and rugby. Recently we spoke with Ciaran Faherty of the Halifax Gaels about what atendees can expect.

What are your own roots?
I was born and raised in Dublin Ireland and lived there until 2010 when I moved to Halifax for 1 year before coming back in early 2012 and have lived here since then. Both my Parents are Irish my Mother is from Cavan and my father is from Galway. The area my Father is from is a strong Gaelic speaking area and I attended Gaelic speaking schools from the age of 4-18

How and when did you get involved with the Halifax Gaels?
In March 2012 I bumped into Brian Walsh a founder member and current chairman of the Halifax Gaels, he informed me they were setting up a GAA club and hoping to play a team from St John’s in July 2012. A meeting was held soon after and a team got together to train weekly at the Garrison grounds. As I recently had being playing for my GAA club back in Dublin I conducted the training sessions and helped out anyone who came down that was new to the sport. This is basically how I ended up coaching the team.

Are they the same reasons you continue to be involved?
Some of the reason’s would be yes.  As Gaelic football and Hurling were the sports I played back in Ireland I was delighted to be able to play them in Canada also . The members of the Halifax Gaels also want the sport to grow here in Nova Scotia and always encourage people to come down and try the sports. We have a number of Canadians on the team now who really enjoy the sport.

Why are hurling, gaelic football and rugby important to Celtic/Gaelic culture?
Although the GAA (Gaelic Athletic Association) was only founded in 1884 records of games of football and especially Hurling go back possibly thousands of years. Hurling is related to the Scottish game Shinty, Cammag from the Isle of Mann and Bandy which was played in England and Wales games which originate from the Celts. In Ireland Gaelic games are the most popular sports attended and the GAA has more then 1 million members worldwide. The games are important to Celtic culture as they try to preserve celtic traditions and the language it is also an amateur organisation where a roll of the community plays a big part.

What can attendees expect today?
Both sports are fast paced games with little stoppages and a lot of running involved. The aim in both codes is to score into the H shaped goals. You get 1 point for putting the ball over the crossbar and 3points for scoring a goal into the net underneath the crossbar. Gaelic football uses a ball that would be heavier then a soccer ball and it would be rougher game then soccer. You can catch kick and punch the ball and shoulder charge an opposing player as long as you hit him I the shoulder. In hurling a wooden bat is used to hit the sliothar (ball) , you can catch the ball in your hand solo the ball on your stick and strike the ball on the ground, an opposing player is also allowed to block your strike with the hurl or hook your hurl. Anyone who played Hockey or Lacrosse would enjoy hurling and on Sunday we will hope to get people out and try hit the ball and take some shots on our goalkeeper.

Will you remain involved?
I hope to remain involved and help the club build in Halifax and get a lot more people involved in the sports. We recently competed in the first ever Eastern Canadian Championships which were held in St John’s Newfoundland. Halifax along with teams from St John’s Montreal Quebec city and Ottawa played both football and hurling. Halifax won the Hurling tournament and  lost to Montreal in the football final. Halifax has been selected to host the 2015 tournament which will take place on the labour day weekend and we look forward to having a big crowd out watching these great games in action.

What can we be doing better?
I think the more people we can get involved in the various organisation’s that promote Celtic/Gaelic culture the better as it will help spread the word around and build stronger connections with the Celtic culture.