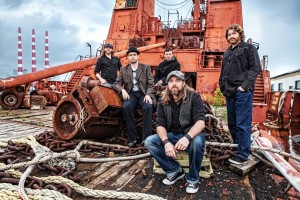 Can-Celt rockers The Stanfields release their sophomore recording, Death & Taxes on September 18. The band will be on tour this fall, including a stop this weekend as part of Summersonic 2012 in Halifax, Nova Scotia. Recently we spoke with vocalist Jon Landry.

Are the reasons that you do what you do the same today as they were when you started?
Yes. It’s a love of music that drives us. Our focus is more refined, but the drive still comes from the same place.

How have you grown as songwriters and performers since the last recording (Vanguard of the Young & Reckless)?
I think subtleties have become more important to us as writers and players, even though one might not initially pick that up after listening through Death & Taxes once.

What was the recording process like for Death and Taxes?
It was a huge learning experience. It was the first time we had ever worked with a bonafide producer. Mike (Fraser) really put us through our paces. I think we came out of the process a much better band.

Why the title?
It shares the title with one of the tracks on the record. There is no real motive or statement behind it, but I think it sums up the fuzzy and loose themes on the album.

What kinds of themes are inherent on the new recording?
Death & Taxes is basically an extension of many of the themes found on our last record. Striving to understand a particular concept, like the economy and where a “normal” person fits within, is a life’s work. We just tried to peel back the onion a bit further with the lyrics. We were definitely not interested in reinventing the wheel.

How did you feel once the process was complete?
Exhausted! This might also be strange to say, but immediately after the final mixes were done, it felt anti-climactic. We were so engrossed in the project for over a month straight, we became very familiar with every nuance of the album.  I put away the recording for a month or more and came back for a listen, and I realized we had made something that I am very proud of. Mike did a fabulous job mixing the record, and we definitely did the best job we could possibly do.

What has the response been like from those that have heard it?
Pretty good thus far; some people are surprised at how hard-edged it is. To me it’s a natural progression. Since Vanguard, we’ve played hundreds of shows all over North America, in many cases, singing for our supper. We’ve become a louder, faster version of ourselves and I think it really shines through on Death & Taxes.

In your opinion, what is it about Celtic-inspired music that appeals to so many listeners?
I think it’s the rhythms, which is a common thread in most popular music, Celtic or otherwise. Personally, I love old tunes like “The Bloody Sarks” and “The Minstrel Boy” for example. They make my blood boil, even though they might be considered light-hearted ditties at first listen.

What makes a good song?
I have no idea. The more I dive into this industry, the more I realize there is no accounting for taste. I guess how a song makes you feel determines if its good or not. It’s all opinion.

What are your thoughts on the state of music in Canada today?
Generally healthy, but I think the powers that be are doing a huge disservice to Canadian music when a Christmas album is recognized as “Album of the Year”.

What can audiences expect from a live Stanfields performance?
Every ounce of energy we have to give. We aren’t the flashiest or sexiest band in the world, but we aim to leave nothing on the table.

What’s next on the band’s creative agenda?
It changes almost daily. We are fiddling around with a lot of acoustic music, but I think it could be some time before any of that sees the light of day. We are constantly working on stuff, but we’ve been focusing mostly on making our live show better. We have a billion dates in support of Death & Taxes coming up soon.