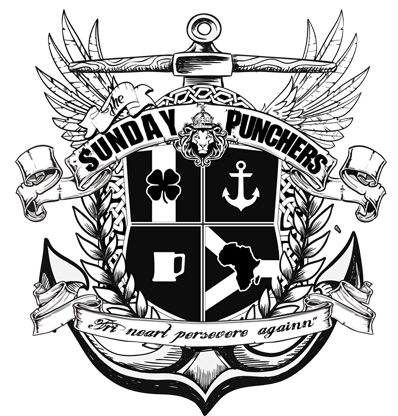 It’s likely that Celtic rock ‘n’ roll isn’t the first thing that comes to mind when one thinks of South Africa. The Sunday Punchers are trying to change that.

What is your own background/ethnic heritage?
We’re all mongrels to be honest. Some of our members can claim significant Irish and Scottish heritage but in South Africa it’s all just a huge mix up. Our guitarist gets fed up with claims of high heritage and then asks us where we were born and then we say here in South Africa he says “You’re South African, be proud of that.” Our country is beautiful because it’s diverse. We’re not anthropologists so we’d lie if we tried to tell you what elements in our background makes us Celtic or anything else for that matter.

When and why did you start playing music?
We’ve all just played since we were teenagers. As young and impressionable kids we’d go to shows and see bands punking out and then tell ourselves wow this is really cool. One day we want to do that.

How long has the band been around?
Since late 2010. Although before that Mostert had a band called Primitive Anarchists that introduced him to Shaun and Mike. Shaun knew Darryn the drummer from their punk days going back maybe ten years.

How has the group evolved since that time?
Members came and went. Building up a band with a following isn’t the easiest thing to do. But shared vision and the knowledge that we are onto something cool kept the band together. And we grew up. Our guitarist studied music and we recorded our songs in a mattress fort and he’d make it sound amazing. Now he owns his own studio and records and produces us professionally.

Why the decision to start performing Celtic music?
Our Afrikaner ancestors picked up all these ethnic instruments like accordion, banjo, tin whistle, harmonica and the fiddle. and came up with something unique. It incorporated elements from their ancestors, but they came up with something unique to our country. Now we got all these amazing instruments lying around that our grandparents used to play and we take them and play what we feel. We write about what’s important to us, but because we have all these instruments it’s just a little more diverse. And our parents helped shaped our musical taste and passes down this amazingly cool musical heritage and we get to honor them with our music. It’s pretty cool.

How would you describe your sound today?
Although it’s mainly Celtic punk we like to think our music is as diverse as we are as South Africa. Our bassist Hewie came into the band and played one of those old school bass lines that you’d hear on Johnny Cash records and it stuck. Shaun picked up banjo and by ear developed a triplet picking style that he claimed sounded Irish to him. Mostert is quite into old folk singers like Kris Kristofferson and poetic singers like Leonard Cohen. Mike loves old school rock. All these influences shine through in our music.

Where do you typically perform?
Bars, clubs, festivals. Our music is energetic and angry at times so we do play with a lot of different genres but there we enjoy sharing shows with other punk and ska bands.

What is the response like from audiences?
Because we share the stage with other genres people come and tells us how great it is that we give them something unique. We follow metal, rock and punk bands with something unexpected. They come out of a mosh pit and we make them dance. We play bagpipe solos, songs about war and drinking songs all in one go. We play a waltzy drinking song right before launching into our heaviest songs.

Is enough being done to preserve and promote Celtic culture?
From our standpoint we can’t really say. We get to play our music and hope we’ll get famous enough that kids see us on stage and get inspired enough to pick up ethnic instruments like bands influenced us. We make music for ourselves and we count ourselves lucky that we get booked, our videos get views and people enjoy our music. We’ll continue to play until our following dies out and then we’ll play for ourselves.

What can we be doing better?
We can probably just answer what could the people we project our music on do different. Enjoy that we are taking music that we think is so incredibly cool that we want to share it with you. It’s the bad joke that everyone’s Irish on Saint Patrick’s Day. A criticism we get every so often is that how can we play Celtic music if we’re not Irish or Scottish ourselves. We rate if everyone wants to be you on a day of cultural significance you’re doing something right. We’re taking a part of Celtic culture and making it new, making it ours and sharing it on ground level. Saying we can’t play Celtic punk because we all come from a slightly different culture is like saying you can’t enjoy pizza because you’re not Italian. There are probably bands in our genre that have better pedigree than us, and that’s great, but like we said in South Africa beauty comes from diversity and that’s us.  There are Celtic punk bands from Canada, France, Germany and even Spain and they love the fact that a South African Celtic Punk band exists. It’s all just a big happy drunken family.