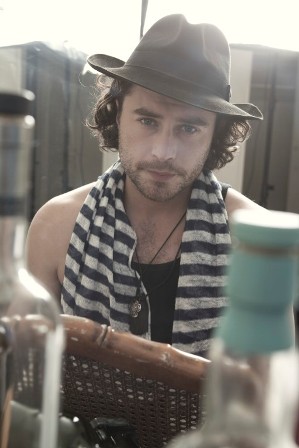 April’s Tartan Week celebrations in New York City weren’t quite the same this year without Kevin Ryan. “Aye, now that was a grand weekend,” grins the Irish actor, recalling his appearance at the annual Dressed To Kilt fashion show in the Big Apple two years ago. “See, it takes an Irishman to really get the party going. We always bring a bit of the craic.”

While the Dublin-born thespian has toned down the revelry since then, he’s been toning up at the gym. “I try to get there a couple of times each day,” says the 29-year-old. “Or I will take the dog out for a hike in the Hollywood hills.

“Keeping fit is part of my responsibility to my roles,” he adds. “Most people don’t realize that acting is a very physically demanding profession, with a lot of long days preparing and shooting scenes. If you are not in great shape, then your career is not going to last very long.”

Thankfully, Ryan’s career appears to be in good form. “When Copper (the BBC America series) was cancelled after two seasons, I didn’t let up. I got right back up on the horse and kept moving forward, staying busy and positive.”

It wasn’t long before he was back in front of the camera, starring in Philippe Calande’s film The Guru & The Gypsy, which is scheduled for commercial release later this year.

More recently, he picked up the part of an Irish pirate alongside John Malkovich and Yasmine Al Massri in the NBC television series Crossbones, which debuts tonight. “I absolutely love the role,” he says of his character, Finnigan. “The producers allowed me the freedom to develop the part as I saw fit and I was able to create something quite unique. From what I know, this is the first Irish pirate ever presented on TV or in a film.”

Based on the book The Republic of Pirates by Colin Woodard, and adapted for television by UK novelist and screenwriter Neil Cross (Doctor Who, Luther), Crossbones dramatises the life of the infamous swashbuckler Blackbeard.

“It was really quite an education as well,” explains Ryan. “Again, part of my responsibility to my roles is reading up on the subject to better understand my part in portraying it. That period of history in that part of the world was filled with mystery, romance, intrigue and many larger than life characters that have become a part of our mythology. It has been, literally, a fantastic experience.”

And though Tinseltown continues to welcome the award-winning actor with open arms, home will always be the Emerald Isle’s capital city. “I am so busy that I don’t really get homesick that often,” notes Ryan. “But I love to spend as much time with my family as I possibly can. Being around my mom and dad and brothers and sisters helps keep me grounded. I did get back to Dublin for a few weeks this past Christmas and it was great to reconnect with all of them. There’s nothing quite like a bit of the Irish craic.”

Ryan comes from a family of eighth-generation stonecutters. His early passions for Shakespeare and dancing led him into acting, landing a choice role on the RTE TV series Raw. His first short film, Laredo, which he starred in and produced, won four awards, including two at the Boston International Film Festival. His two other films, The Tub and Songs for Amy, were also award winners. Ryan has repeatedly been voted one of Ireland’s Top 100 Sexiest Men.