The Truth About Trump 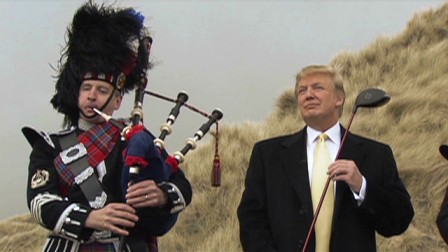 Donald Trump is the son of a Scotswoman. His Gaelic-speaking mother, Mary Anne MacLeod was from the Hebridean Island of Lewis, off the west coast of Scotland, from where she emigrated to America and met and married Frederick Trump, of German origin. At that time, MacLeod was the most common surname in the island and is well represented there to this day.

Mary Anne was born in the village of Tong, in the parish of Stornoway on 10th May 1912, to a fisherman named Malcolm MacLeod and his wife, Mary Smith. This couple had been married in 1891 and both were Gaelic speakers, and although not so widespread as it once was, the language is still alive and well in that region. It is thus likely that Mary Anne herself would have spoken it and the young Donald may well have been soothed by Gaelic lullabies as a child.

Mary Smith MacLeod lived until the age of ninety-six years, dying in 1963. At that time her address was No. 5, Tong; she had been born, married and died in the village which is on a promontory 4 miles NNE of Stornoway. The birth of her daughter, Mary Anne, had taken place at No. 3 Tong and it seems to have been a close-knit community of crofters and fishermen, many of the men-folk following both these traditional occupations in the appropriate seasons of the year. Certainly, Malcolm MacLeod, Mary’s husband was variously described as crofter and fisherman; he also lived to a respectable age and died (also at No. 5 Tong) in 1954 aged eighty-seven.

Malcolm MacLeod was born in 1866 in Aird of Tong and his parents were an illustration of the prevalence of the surname, both being MacLeods. His mother had been Ann MacLeod before her marriage in 1853 to Alexander MacLeod. At that time, the spelling of names and place-names was erratic and inconsistent, depending merely upon the whims of the individual themself or of the clerk concerned. Frequently it was the preference of the clerk which prevailed as the earlier generations were not always literate and many of the documents were signed with “X – his mark”. Malcolm had evidently learned to write but on registering his 1866 birth, his father, Alexander had simply added his mark.

These families, invariably with numerous children (Malcolm was one of ten) lived in fairly primitive conditions in a harsh environment, and examples of the famous ‘black houses’ of the area survive today. These consisted of low, thick, stone walls and sturdy roof coverings of thatch (well seasoned with generations of soot) which kept out the worst of the winter weather. The central hearth, in the middle of the floor provided both warmth and cooking facilities. Both men and women worked on the land, with women generally bearing the brunt of the hard labour of cutting and carrying home the peats which fuelled the household fires – children were also pressed into service at this task. Life was hard in this bleak moorland island where the few indigenous trees struggled up through the generally boggy landscape, covered with heather, moss and rushes. The machair, a strip of sandy soil made up of shell sand and vegetation which bordered the sea was good pasture for those who kept cattle.

No official record was made of the birth or baptism of Alexander MacLeod – the grandfather of Mary Anne MacLeod Trump) but, according to the ages shown for him in various sources, i.e. census returns, his marriage and death certificates, he would have been born in Stornoway around 1830. This was before the advent in Scotland of compulsory registration of these events in 1855. His death record reveals that both he and his father had been crofters and that each of his parents was also named MacLeod – William and Catherine.

Mary MacLeod Trump’s maternal line was also well established in Tong, her mother, Mary, being born there in 1867 to Donald Smith and Mary Macaulay Smith. They had been married in Garrabost, also in the parish of Stornoway, in 1858. At that time Donald was said to have been a fisherman and the son of Duncan Smith and Henrietta MacQueen Smith. A note of tragedy creeps into the family tree here as Donald was lost in Broadbay, off Vatisher Point, Stornoway when a squall of wind overturned his open boat in 1868. He was aged thirty-four and left his widow to carry on the family croft after his death and to bring up their four children, the youngest of whom, Mary, was only a year old. Donald’s father was the only man in the family not to have the dual occupations of crofter and fisherman as he was described as a woolen weaver and cottar. His widow, Henrietta, worked the croft after his death.

Given the harsh economic realities of life in such isolated communities of subsistence farming and fishing, it is little wonder that numerous Lewismen (and women) emigrated as the land simply could not sustain the growing population. Clearly there was a better life for them in the new world.