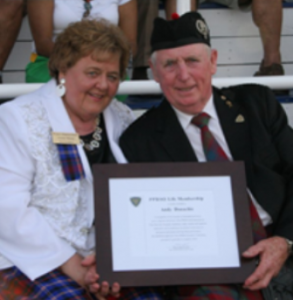 The first Glengarry Highland Games was held in Maxville, Ontario, in 1948, when Connie Blaney was just 15. “On the morning of the Games, I told my mother, ‘The day I have dreamed of is finally here,’” she said.

In 1948, Blaney was already an excellent piper, although back then, not many girls played the pipes. But with instruction from her father and then pipe major Steven MacKinnon, Blaney’s playing flourished.

“On the day of the Games, I was a novelty,” Blaney said. “I did pretty well. I won often. I have a coat full of medals that I’ve kept as a keepsake.”

Sixty-five years later, Blaney still finds the Glengarry Highland Games “every bit as exciting as the very first one.” The massed band is her favourite event. “We have a lovely infield and when you get 70 different bands counter-marching and playing en masse it’s quite a sight.”

She has undertaken many volunteer roles, including secretary and chairman of the pipe bands as well as Games president in both 1990 and 1991 and liaison with the Pipers’ Society. Her enjoyment of the events and the camaraderie of her colleagues have kept her interest. “It’s just the love of it,” she said.

In 1948, only eight pipe bands attended the Glengarry Highland Games. Now, with up to 70 bands competing, it is one of the biggest competitive Games in North America, attracting around 25,000 to 30,000 visitors each summer.

Blaney has seen a lot of changes since the poor crowd control of that first year. Today, the Games run efficiently and the Maxville site exceeds 85 acres.  Blaney, who worked as an elementary school teacher, lives about one mile from the site. The Games are never far from her mind either. “Volunteering is a year-round thing for me because you just get finished with one Games and then you get all hepped up and preparing for the next one.”

This year, Blaney will be meeting and greeting dignitaries and guests. She believes that the most successful volunteers are those who “have it in their bones, sort of thing.”