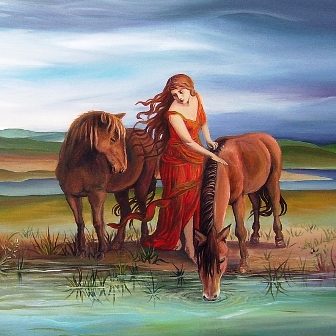 While Galway may be the creative capital of Ireland’s Wild Atlantic Way, the country’s west coast is a cornucopia of Celtic-inspired arts.

A walking tour of Galway should be mandatory for any visitor. From above, the small maze of streets hasn’t strayed much from its original medieval-era design. Down on the ground, however, the city of 75,000 has become a treasure trove of art studios, craft shops, theatres, music halls, jewelry stores, restaurants, museums, and cinemas.

Boasting more than 25 festivals annually, and drawing hundreds of thousands of visitors from around the world to its shores, the area is the heart, soul and economic engine of the Emerald Isle’s plush west coast.

That inspiration, it appears, is infectious, as smaller communities up and down the coastline continue to expand their cultural offerings, evolving into more than a mere cottage industry.

Fifteen minutes northwest of Galway bay, the Farmlane Art Gallery in Moycullen features the work of local artist Mary Holan. Working mostly in oils, Holan draws inspiration from the Irish sea and sky, transforming physical landscapes into timeless abstract expressions. Her small gallery is one of dozens that colour communities across the west.

The language arts are well represented here also, with schools – both public and private – devoted to the promotion and preservation of spoken and written Gaelic. While much of western Ireland counts the ancient idiom as its mother tongue, there has been a strong push in recent years to make it real and relevant to younger people; classes are now mandatory for students throughout the region, and libraries, bookshops and reading festivals have received extra government funding over the last decade to keep the language from languishing.

Southwest, near Spiddal, Charlie and Dearbhail Troy are doing their part to keep Celtic customs alive with their refurbished 17th century Connemara-hill village called Cnoc Suain. The multi-building facility hosts a number of creative day experiences and immersive residential programs that focus on area history and culture. The couple is fluent in Gaelic, proactive with political issues, and work tirelessly to support and safeguard the region’s economy, ecology, and arts.

An hour up the coast in Roundstone, the country’s master Bodrhán maker Malachy Kearns plies his trade for folk musicians, young and old, near and far. Set within the walls of an ancient Franciscan monastery, Kearns’ workshop is a shrine to the distinct Celtic drum; old photos and newspaper clippings line the walls, videos and music pound out rhythms day and night, and wood and skins are draped across desks and drawing boards. A visit to his shop is more than a stop for the curious – it is a trip through time, and a lesson in local legend and lore.

Celtic lore is at the core of O’Dalaigh’s Jewelry in Clifden. The family-owned and operated business designs and manufactures an array of rings, necklaces bracelets, bangles, brooches, pendants, earrings and more, all of which speak to the region’s past and present. Like traditional music, the art of metal-smiths has been infused in everyday life here for centuries, and now enjoys world-renown for its craftsmanship and quality.

Interestingly, where creative communities in other parts of the world – Europe and North America in particular – might foster a competitive atmosphere amongst artists, musicians, painters, poets, photographers, dancers, sculptors, chefs and others across the Wild Atlantic Way are cooperative and supportive of each other’s endeavours.

That collective resourcefulness and resolve in the arts is more than a habitual necessity, however; it is a testament to the area’s true enduring legacy – the heart and soul of its Celtic people.