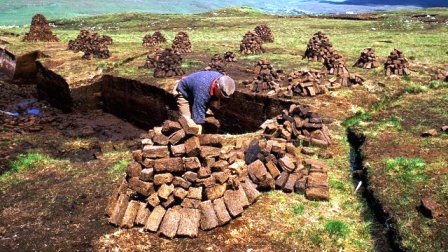 It is said in Ireland that a man is nothing without land, and that true wealth is measured not in money, but in acres.

And while pockets of the Emerald Isle enjoy the fruits of rich and fertile terrain, much of the country is covered with bog, or turf topsoil. In particular, the western coastline, from Galway to Mayo, is matted in marsh.

Wikipedia defines bog as “a mire that accumulates peat, a deposit of dead plant material – often mosses, and in a majority of cases, sphagnum moss. It is one of the four main types of wetlands. Other names for bogs include mire, quagmire and muskeg. Bogs occur where the water at the ground surface is acidic and low in nutrients. In some cases, the water is derived entirely from precipitation. In general, the low fertility and cool climate results in relatively slow plant growth, but decay is even slower owing to the saturated soil. Hence peat accumulates. Large areas of landscape can be covered many meters deep in peat.”

Ever the survivalists, the Irish were early adapters of bog; bricks were cut and dried, and used like logs in the fire to heat homes and stables – a process still used today.

Across counties Galway and Mayo, farmers now employ huge diggers to tear up swaths of soil, later dicing them into smaller bits for transport. It is not unusual to see massive mounds of peat protected from the elements under plastic tarps.

The smell of burning peat is familiar to Irish around the world, bringing back memories of cool autumn nights around the family hearth. Again, the practice is still in use today, and as my guide and I leave the western outport of Achill Island and weave our way north along the country’s rugged shoreline, small puffs of peat smoke can be seen coming from almost every homestead chimney. The sweet scent blends beautifully with the sea salt air and fine mist – some call it the Emerald perfume.

At the very upper tip of County Mayo, near the tiny town of Ballycastle, we visit the Ceide Fields, home to the most extensive Stone Age monument in the world. The 5,500 year-old archeological site – which consists of field systems, dwelling areas and megalithic tombs – was discovered by local schoolteacher Patrick Caulfield in the 1930s. Four decades later, his son Seamus began unearthing the artifacts, long buried under blankets of bog.

While the identity of the original inhabitants has yet to be uncovered, site manager Gretta Byrne thinks she has an idea.

“There is evidence to suggest that they were French in origin,” she notes. “Scientists have discovered similar sites in France dating from the same era. Part of the problem is that the bog doesn’t preserve human remains – the acidic elements erode the bones – so we may never know for certain whom those first settlers were.”

The density of the bog’s water content – 90% H2O – makes it almost impossible to use radar and sonar devices for depth assessment of the site. Instead, Byrne and her peers measure digging distance by reaching down through the wetland soil with 3-4 meter cast-iron poles.

A few miles northeast we cross into County Sligo, and the bog gives way to greener, more arable land. Trees and brush grow wild across the hills, and farmers work the fields for more than just peat and hay. Vegetable stands and flower shops spring up along the roadsides, and meat markets showcase an abundance of local beef.

Interestingly, trees had virtually disappeared from Ireland until 1980, when public reforestation projects took root. Beginning with the Norman conquest in the 1100s, and through the ensuing centuries of British rule, native forests of alder, ash, birch, rowan, pine, willows and others were chopped down and exported. The mythical tree of Celtic lore, the oak, suffered a similar fate.

Deforestation took a terrible toll on the country’s soil, particularly along the west coast, rendering it virtually infertile for hundreds of years. The appearance of woodlands in recent times is more than aesthetic ambition, however, it is an attempt to rebuild an ecosystem, restore the soil, and reclaim the land.