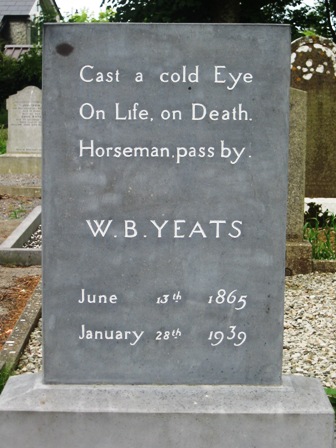 If Donegal is the melodic heartland of Ireland’s Wild Atlantic Way, then Sligo is its lyrical soul.

This year, Sligo will commemorate the 150th anniversary of the birth of its most famous bard – William Butler Yeats – with a series of literary and musical festivals, theatre performances, exhibits, seminars, lectures, workshops, walking tours, and more.

Though born in Dublin, Yeats spent his childhood summers in Sligo, along the Emerald Isle’s rugged northwest coastline. There, he explored the region’s rolling hills, running rivers, stirring seaside, and lush landscape. Rich in flora, fauna, and wildlife, the area is both idyllic and inspirational.

The trees are in their autumn beauty,
The woodland paths are dry,
Under the October twilight the water
Mirrors a still sky

Home to the Yeats Society, and a popular summer school dedicated to studying his life and work, Sligo hopes to host another 50,000 literary lovers over the coming months. Some are sure to visit his ancestral summer home, while others will stop by his small, simple grave at nearby Drumhill, where he is buried alongside his wife George Hyde-Lees.

Interestingly, though Yeats married Hyde-Lees when he was 52, she was not the love of his life.

In 1889, at the age of 24, Yeats met Maud Gonne, a young heiress and Nationalist. Instantly infatuated with her beauty and intelligence, he proposed marriage on three occasions. When Gonne wed another man, Yeats sought solace with pen and paper.

And who could play it well enough
If deaf and dumb and blind with love?
He that made this knows all the cost,
For he gave all his heart and lost.

Over the next decade in Dublin, riding the wave of republican sentiment, he turned his attention to reforming the Irish Literary Society, and co-founding Ireland’s National Theatre (later renamed the Abbey Theatre) along with close friend Lady Gregory. Yeats also tried his hand at playwriting, producing a series of dramatic, well-received works.

Though Protestant by birth, the scribe identified with the country’s emerging Nationalist movement – likely brought about by his love for Gonne – even joining the Irish Republican Brotherhood, a militant forerunner of the terrorist IRA.

Now and in time to be,
Wherever green is worn,
Are changed, changed utterly:
A terrible beauty is born

Twice named a Senator following Irish independence in 1922, the rhymester’s interest in the cause waned, preferring his full time duties as an artisan. The following year he was awarded the Nobel Prize for Literature, cementing his place forever in the annals of Irish lore.

With his health failing over the next decade and a half, Yeats refocused his efforts on poetry, revising his style, and working with his peers to usher in the discipline’s modernist era until his death in 1939.

Now that my ladder’s gone
I must lie down where all the ladders start
In the foul rag and bone shop of the heart.

And while he lived and worked in Dublin and London, and travelled extensively to the European continent in attendance of his duties, Yeats often returned to Sligo in search of familiar comforts. There, he would retrace the steps of his childhood, revisiting innocence, and reigniting his interest in mysticism and Celtic legends.

Ever the wordsmith, he composed his own epitaph just before his passing, the last three lines of which are etched for eternity upon his gravestone.

Under bare Ben Bulben’s head
In Drumcliff churchyard Yeats is laid.
An ancestor was rector there
Long years ago, a church stands near,
By the road an ancient cross.
No marble, no conventional phrase;
On limestone quarried near the spot
By his command these words are cut:
Cast a cold eye
On life, on death.
Horseman, pass by!