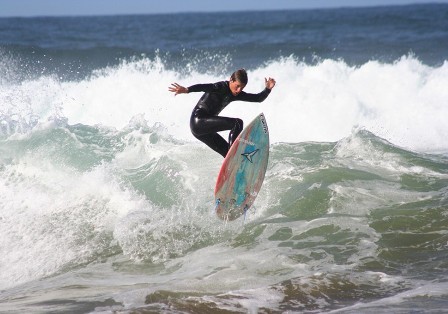 The Wild Atlantic Way is the new Yellow Brick Road for surfseekers, adventurers, free spirits and everyone who gets a thrill from rugged Irish coastlines carved out by mega breakers.

As the world’s longest fully coastal trail, it hugs Ireland’s wave-lashed western seaboard from Malin Head at the tip of the north western-most county of Donegal, down to the southern town of Kinsale in County Cork.

All along the way, fantastic beaches and cool communities await, and iconic waves too, confirming the Irish coast’s growing global reputation as a surf paradise.

Hitch your board and take a drive through a spray-in-your-face, wind-whipped terrain to rival any of the world’s great ocean-side odysseys and get blown away by the Wild West landscape. This is the real deal Ireland; remote, rocky, windswept, elemental, stunning and eminently surf-able.

Take one look at the dramatic way the land and sea meet in Ireland and it is clear this is a coast that produces world-class breakers. The west of Ireland is constantly exposed to the winds and the swell brought by the Atlantic, keeping things pumping.

So for distance and diversity, the Wild Atlantic Way knocks the socks off touring routes in other surf zones. It’s more than three times the length of California’s Pacific Coast Highway, 10 times longer than Australia’s Great Ocean Road and over 12 times the distance of South Africa’s Garden Route. And it’s designed to let you go off-piste to places where you can really get to know Ireland.

The full route links up more than 1,500 activities, nearly 600 events and 53 Blue Flag beaches – useful to know if by the odd chance the waves don’t come out to play.

Join the route anywhere you like. Get side-tracked by a festival or enormous rollers on an empty beach. Throw in some island hopping. Travel part of the Way by sea and get even closer to the water.

Surfers at every level, or with an appetite for variety, will find everything they need along the Wild Atlantic Way. Start out nice and easy to get your sea legs or dive straight into serious waves and exhilarating challenges.

Start at the Top

County Donegal has become an international surfing magnet. It’s got 10 Irish Surfing Association Schools and Ireland’s surf capital, Bundoran, one of only two European spots to make it onto the National Geographic list of top 20 surf destinations.

Lucky Bundoran catches all the swells that power across the North Atlantic. The shimmering green waters produce rolling waves, which are shaped by the headlands and flat rock reef. One Ireland’s most famous break points, The Peak, is here.

The reliable conditions have something to stoke everyone and provide plenty of challenges to keep die-hards coming back for more. Once a quiet, old-school fishing village, this lively place – some call it ‘Fundoran’ – is now totally dedicated to surf, on land and sea. In the hotels, cafes, hostels, music pubs and lively bars, it’s all about the Atlantic waves.

Elsewhere in Donegal, beginners and intermediate surfers will feel right at home at Rossnowlagh, while serious surfers will be ‘amped’ by the savage conditions at Inishowen, Fanad Head, Dunfanaghy, Bloody Foreland and Dungloe. At Mullaghmore Head, catch the wave of your life if you dare to defy the walls of water and massive tubes.

Legends of the West

Further down the Wild Atlantic Way, Sligo is one of the great original Irish surfing destinations, with a well-established culture that has grown up alongside dependably mammoth waves in places like Strandhill and Enniscrone. As one of the top-notch adventure holiday destinations in the country, Sligo is a great place to get your adrenalin rush.

And it’s not all about the guys. Many a surfing career has started at Sligo’s women-only classes where expert female instructors promise to get newbies up on their feet.

Neighbouring Mayo is a county of huge contrasts and wide-open spaces with another rapidly developing wave scene. In addition to a giant helping of spectacular scenery, Mayo is oversupplied with superb surf beaches.

Try Bentra, a spit extending into magnificent Clew Bay. Or at windswept Belmullet, it’s easy to believe you could surf straight to America. Keel Strand on Achill Island is another longstanding favourite.

To feed the year-round passion, SurfMayo, one of Ireland’s first surf schools, is open every day. And for time off the water, Mayo has great towns, including Westport (voted by the Irish as their fave in the whole country), a fantastic food culture based on fresh goodies from land and sea and a 42km off-road bike and walking trail – the Great Western Greenway.

Meanwhile compact County Clare is the home of ‘the big one’. At certain times of year, meteorological, geological and maritime conditions converge to produce what scientists and surfers call ‘the perfect wave’.

Clare’s ‘Aileen’ is a legend among the international surfers who have conquered this wall of water.

Because the Aileen wave occurs beneath the iconic 800 feet high Cliffs of Moher, one of Ireland’s most loved attractions, tow-in surfing is the only access to a phenomenon which can tower to a jaw-dropping 30 feet.

If Europe’s most perfect wave is too much, just further on down the Way you can catch great adventures on a smaller scale in the surfing town Lahinch, which has an easy-going vibe and loads of amenities for breach break fans.

Set in the south-western section of the Wild Atlantic Way, County Kerry has an immense jagged coastline, the country’s highest peaks and longest beaches. The Irish call Kerry ‘The Kingdom’. Wilder, grander and with an extra wow factor, they say this county feels ‘different’.

The potential for wave-riding is wild too. So before Ireland’s greatest surf secret is out, now’s the time to discover the next big destination, with breaks for every boarder.

Inch beach is famed in Irish myth and is now becoming part of surf lore too, as is Banna, while Ballybunion offers a magic combination of four miles of sand and cliff breaks. And with nearly 20km of gentle beach surfing, Castlegregory makes space for everyone.

Out on the water, you just might spot dolphins dancing. Or take a boat tour and watch friendly Risso’s dolphins, minke or humpback whales. They like to hang out in calmer seas, along with gentle giants, basking sharks.

Cork is famous for as Ireland’s ‘rebel county’ its seas are now attracting seasoned surfers as well as those dipping their first toe in the water.

Contenders for the board include Barley Cove with its ever-changing currents, Garrettstown, Castlefreke and Inchydoney – a long sandy stretch offering good safe fun for families.

And with great surf schools (sailing, kayaking and windsurfing classes too), it’s a fantastic place to catch that first wave.

West Cork is also uniquely captivating, with the most colourful villages in Ireland; pretty, paintbox streets festooned with flowers and lined with inviting cafes, pubs, craft and surf shops.

The Wild Atlantic Way is so extensive, tackling it in sections sounds like a plan. But when calculating drive times, you’ll need to double your original estimate. Time and distance have a different quality in the West of Ireland.

You’re sure to get talking to locals who will know a thing or three about places worth checking out. Or you might linger on in a pub or restaurant, discover ‘thee’ perfect surf spot and stop and stay on a while.

And as the surfers do their thing, landlubbers can enjoy a fab foodie foray, delve into Irish heritage, follow a craft tail, or hike to a castle – the Wild Atlantic Way has something up its sleeve for everyone.