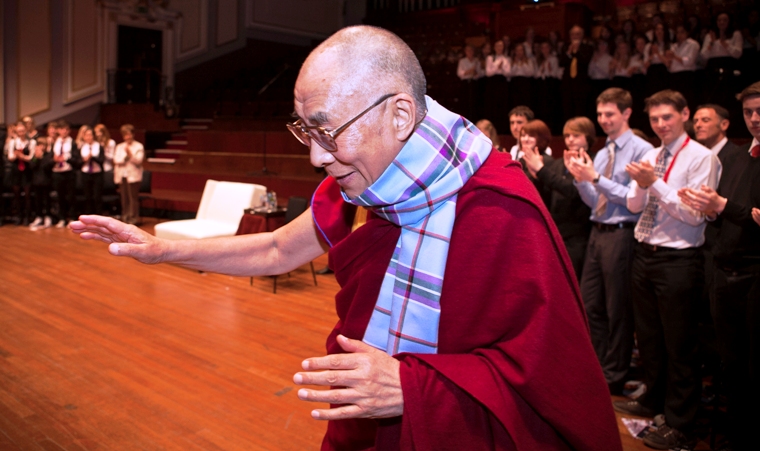 With such high-profile supporters, it’s not surprising that the World Peace Tartan is fast becoming an iconic symbol of peace.

You might think that a fabric that harmoniously blends shades of light blue, purple, green, red, black and white must be the work of a designer. But no, the World Peace Tartan was created by Edinburgh-based Victor Spence, a 50-something inter-religious consultant and founder of The World Peace Tartan Initiative.

Spence created the tartan in 2011 to convey a message of peace while generating revenues to fund the work of a charitable foundation through the licensing of its brand, design and products. As it grows, the World Peace Tartan Foundation will invest in education initiatives intended to build a culture of peace and address child poverty.

“It takes a lot to overwhelm me,” he said, by phone from Edinburgh. “But I’ve had a warm response from everybody. The message really seems to touch people and move them.” 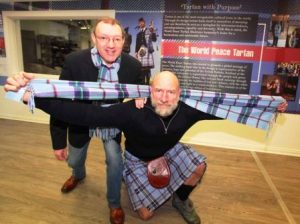 It all began in 1998 when Spence, who had studied Comparative Religion at the University of Edinburgh years earlier, had a profound dream about meeting the Dalai Lama. “This dream, from a person that didn’t remember any dreams, stayed with me and seriously influenced the rest of my life,” Spence said. “Eight months later, I had a clear, audient experience, the only one of my life. The voice said, ‘Now is the time.’”

Spence knew exactly what the voice meant – he was to bring the Dalai Lama to Scotland. To help with this, Spence decided to ask Scottish and Edinburgh-based leaders to write the Dalai Lama letters of invitation. Before long, he’d collected eight letters from religious leaders and others from Edinburgh’s Lord Provost and the Speaker of the Parliament.

Spence wasn’t sure what to do with the letters, but a Tibetan Buddhist lama in Scotland suggested he contact the Office of Tibet in London. There, the Dalai Lama’s representative was surprised to hear about the invitation, but not as surprised as Spence was 48 hours later when he received a call telling him the invitation had been accepted.

The Dalai Lama could not actually visit Scotland until 2004, but Spence realized the delay would give him plenty of time to maximize all the opportunities associated with the visit. It also allowed him to hope he might be able to deliver the invitations to the Dalai Lama in person.

Several months after the invitation was accepted, Spence learned of a large inter-religious gathering taking place in Cape Town, South Africa, called the Parliament of the World’s Religions. More than 500 spiritual leaders and 8,000 delegates from around the world would be in attendance, including the Dalai Lama. Although Spence had no contacts at the event, his friends encouraged him and even paid for him to go.

After much persistence and luck, Spence was introduced to The Dalai Lama and was able to present his letters of invitation. In turn, the Dalai Lama gave Spence a white silk Tibetan scarf called a khata, which he wrapped around Spence’s neck. This experience was a catalyst in the creation of the World Peace Tartan because, at the very moment he received the khata, Spence decided to give the Dalai Lama a tartan scarf.

With his letters of invitation delivered, Spence returned to Scotland inspired by interfaith relations. He began to work with the Edinburgh Interfaith Association and in the last 12 years has built the Edinburgh group into one of the leading local interfaith bodies in the world. 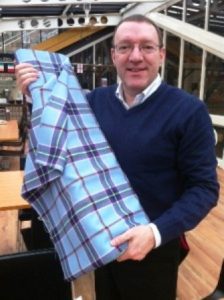 He saw the Dalai Lama again in Paris in 2003 and presented him with a gift of a folded tartan scarf. “He took it from me and wrapped it around his neck himself,” Spence said.

“At that point, I realized there was something significant in the actual giving of a scarf as he had done to me in Cape Town. I thought, next time I’ll put it on you myself.”

Spence then began giving tartan scarves to other religious leaders and Nobel Laureates he met, including Archbishop Desmond Tutu and Nobel Peace Laureate Mairead Corrigan Maguire, whom he hosted in Scotland. Having realized it was important to connect physically with the recipient, he made sure to do more than just hand them the scarf. “I put it over their head, or around their shoulders, and said, ‘I’m giving you this tartan scarf as a gesture of peace and friendship from Scotland.’”

The Dalai Lama eventually visited Scotland in 2004 and again in 2005. Both times, Spence gave him tartan scarves. It wasn’t until 2010, when Spence was still giving his guests various tartan scarves that he realized it was time for a specific tartan for this purpose.

“That’s when the World Peace Tartan arrived in my mind,” he said. “It would be for giving to people in peace and friendship from Scotland. It would also have another dimension of meeting on a peace level. I started to build a narrative of meaning alongside this tartan and what it would look like.”

The end result appeared in 2011 when Spence created his new tartan. The light blue represents the presence, hope and potential of the United Nations. Scotland is symbolized by the purple and green of the Scottish thistle. The red and black are reminders of the realities of war and violence and the great need for a new living culture of nonviolence. The white running through the pattern provides a counterbalance by representing peace and light.

The tartan was launched on June 22, 2012 when the first ever World Peace Tartan scarf was presented to the Dalai Lama during a visit to Edinburgh. During the three-day visit to Scotland, which included stops in Dundee and Inverness, two other peace tartan scarves were also presented to His Holiness.

Jody Williams, chair of The Nobel Women’s Initiative, is among the influential people who have endorsed the tartan. “The creation of this new tartan to symbolize the personal commitment of those who wear it to helping create a world of sustainable peace is a beautiful new way to promote peace,” she said. “Peace is not simply the absence of armed conflict; it is a commitment to a new kind of security―one that places the security of people – human security – above the security of the state – national security.” 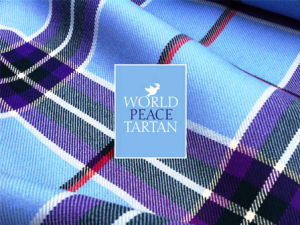 Spence believes the World Peace Tartan is for everybody, but he encourages the Scottish and Celtic Diaspora to get behind it.

“Its narrative of meaning is inclusive, but at the same time, the Celtic Diaspora communities around the world have got a more recognizable relationship with tartan, its history and meanings than others who don’t have any real connection culturally. I would like them to be the ambassadors of this idea because, at the end of the day, it generates revenues for charitable purposes to help invest in localized, grassroots peace initiatives around the world and the alleviation of child poverty.”

PICK UP YOURS TODAY!