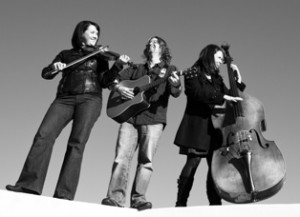 Simple, thoughtful, catchy and honest are all words that describe the songs of Nova Scotia trio The Worry Birds (Zach Smith; acoustic guitar, vocals, Adelle Meagher; double bass, Bhreagh MacDonald; fiddle, vocals). Their sound is equal parts folk, classical and Celtic and their unique combination of fiddle, double bass and guitar produce everything from the dulcet tones of a string quartet to the frenetic pulse of a driving rock band. Smith fills us in on the group’s past, present and future.

What is your own background/ethnic heritage?
I am a mixture of Scottish, Welsh and English and I was born in Kingston, Ontario where my Dad was a professor at Queen’s University. My mother was from New Hampshire and my Dad is from Sydney, Cape Breton. My grandfather was born in Ingonish. My family spent a good part of their summers in Ingonish and recently my father built a house there where he stays for half the year.

I started playing music when I began piano lessons at 3 years old. I can’t even remember starting. Music was very important to my parents and I’m thankful they started me off when they did. When I got a little bit older, Dad got me and my sister started on the uke and our family would travel around to local nursing homes playing and singing folk songs and hymns for the residents. When I was twelve I started pipe band drumming with the Rob Roy band in Kingston, Ontario and began to get interested in Celtic music. My friends in the pipe band introduced me to Battlefield Band, Spirit of the West, Silly Wizard and many others.

How long has the band been around?
The Worry Birds has been a band since January 2010. I had been playing and touring with the Celtic rock band “Pogey” for five years and I was finally ready to start my own group. I had played with Adelle in the past and we had talked about playing together again but needed to find a good fiddle player. Thankfully, Adelle knew Bhreagh whom she had played with in a previous band. Bhreagh agreed to come over and jam and the rest is history.

How has the group evolved since that time?
When we first started we knew our goal was to play original music but that was about all we knew. We practiced regularly and we managed to arrange a couple of my songs but we got stuck on a song called “Lonely Road”. This song had been performed by Pogey many times and it had drums and certain riffs in it that were difficult to realize with the Worry Birds’ instrumentation. It needed to be drastically changed. We tried and tried over a number of months to re-arrange “Lonely Road” and at long last were able to come up with an arrangement that bore little or no resemblance to the Pogey version. It was this long process that really helped define the “Worry Bird” sound.

Why the decision to start performing Celtic music?
The decision to start performing Celtic music was a no brainer. We are all passionate about it and most importantly we are all huge fans. We’re always sending each other links back and forth of great folk bands and Celtic musicians. My personal musical history is marked with memorable moments that are predominantly Celtic and folk driven–the first time I heard “La Bottine Souriante”, the time spent searching for the Spirit of the West song “Home for a Rest” at my local record store or hearing “The Clumsy Lover” played on pipes for the first time at the Maxville Highland Games.

How would you describe your sound today?
Our sound brings together all our influences and backgrounds to create what I would describe as “Celtic influenced folk”. Adelle has a classical background and is therefore proficient in the use of the bow as well as the more common pizzicato. Bhreagh, being brought up in the Cape Breton fiddle tradition, plays with the strong sense of groove inherent in that style and also has a great ear for harmonizing along with a song. I bring my many years as a drummer/percussionist to the guitar. I have been told I play the guitar like a drummer. Haha. I’ve chosen to take that as a compliment 🙂 It has been fun combining all these sounds and influences in so many different ways. I think that’s why we look forward to band practice so much as that is the place where we get to experiment with new ideas and combinations of sounds.

Where do you typically perform?
We like to perform first and foremost for listening crowds. This summer was actually great for that as we hosted Casino Nova Scotia’s weekly show “Kitchen Party Thursdays”. People listened and sang along and were very appreciative of the music. Even though we were playing essentially the same show every week we had a number of regulars that came to multiple shows. We were humbled and extremely grateful for this support. We have also played a couple of house concerts and we love those too. It is great to get up close and personal with an audience. You can even have some good chats with them throughout the show. We’ve also been playing a bunch of fundraisers this year. All three of us are firm believers in playing as many of these shows as we can. We love helping out with good causes! The Annapolis Valley has been very good to The Worry Birds as well. We’ve hosted the open mic at The Union Street Cafe in Berwick several times and later this fall we’ll be appearing at our third “Night Kitchen” concert in Wolfville.

What is the response like from audiences?
The response from audiences has been positive so far. A few folks are asking for CDs which is nice–we’re still working on that. I’ve also noticed more people singing along with the songs lately. As a song writer it doesn’t get any better than that!

What does the band have on tap for the rest of 2012? The rest of 2012 is geared towards working on our CD. It has become a priority for all of us to get it done sooner than later. We also have several new songs to arrange and put into the set. I’ll also be busy booking shows for the new year. We want to play as much as we can next summer!

Is enough being done to preserve and promote Celtic culture?
As far as promoting Celtic culture, there are many events and festivals around that do just that. Celtic Colours is a world class festival and it has been nice to see the growth of the Re-Jigged Festival in Dartmouth. The Antigonish Highland Games is another great place to experience “full-immersion Celtic”. On the Worry Birds front, our bassist Adelle conducts a grade 8/9 orchestra at the Dartmouth Music Center and last spring she hosted “Spring String Thing”–a two day workshop teaching step dancing, bodhran, Cape Breton style fiddle and mandolin. Clinicians included all three members of The Worry Birds plus multi-instrumentalist Darren McMullen and fiddler Colin Grant. The event also included performances by The Worry Birds and Sprag Session. Adelle’s students are still talking about that event! On a personal note, growing up in Ontario I was far away from the Maritimes for most of the year. Still, my father taught my sister and I the songs of Nova Scotia very early on. I grew up singing “Farewell to Nova Scotia”, “Spring Hill Mine Disaster”, “The Island”, “Cape Breton Lullaby” and many more. It seems to me that the best way to preserve any culture is to pass it down within your family. I am grateful to my father for passing those songs to me.

What can we be doing better?
As citizens in a culturally diverse province, I think it is our duty to learn about and respect all the cultures of our province. What happened at Africville? How did the highland clearances affect settlement of the province? How were the Mi’kmaq treated by invading Europeans? What was “Le Grand Derangement”? Respecting and understanding the other cultures of Nova Scotia is crucial before we promote our own.